The network behind ‘Arthur’ isn’t happy with all those memes

So, you know all those wild Arthur memes that have been floating around for a while now that culminated in an explosion of clenched-fist and risqué jokes last week? It turns out that the people behind the children’s cartoon aren’t all that happy with what the internet has done with their sweet aardvark and company.

The Boston Globe reports that WGBH, the Boston-based buzzkill and network responsible for Arthur, released a statement on Wednesday summing up its feelings about all those amazing memes. To be fair, WGBH reportedly said that it appreciates some of the more G-rated ones. But apparently it’s “disappointed by the few that are outside of good taste.”

Let’s take a look at some of these remixes that are questionable (in the eyes of WGBH, at least). 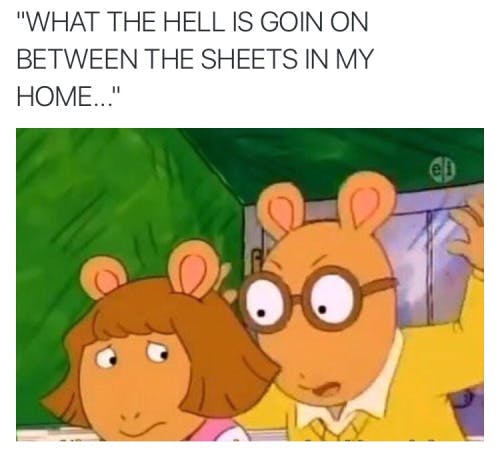 We get it, incest isn’t something that should be concerning a couple of cartoon characters. And more importantly, D.W. would totally be out of Arthur’s league anyway.

The WGBH spokesperson also said, “Our hope is that Arthur and his friends will be depicted in a way that is respectful and appropriate for all audiences, including young Arthur fans and their families.”

OK sis, here’s the deal. The internet will take anything out there make it goddamn awful. So don’t think of it as anything personal, it’s just the cycle of online life. And this isn’t the internet at its worse.

And Muffy’s got a message for the network, that’s doesn’t exactly pertain to this situation but definitely shares a sentiment.

While the network might not be happy, we’re sure that the Arthur memes will continue. Because even if WGBH isn’t stoked about them, we can’t stop cackling.

when he's cute and tall but doesn't believe in astrology or aliens pic.twitter.com/xjN1Ueudnh