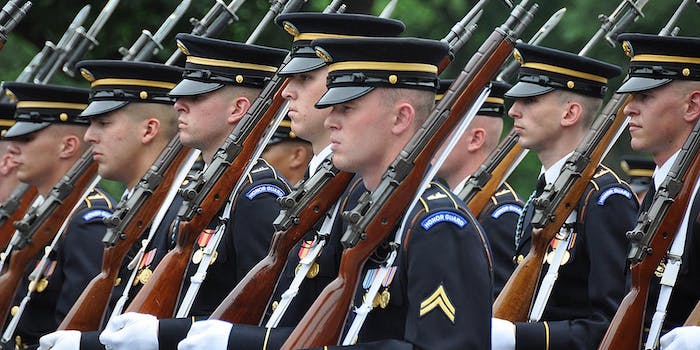 The Army is recruiting an undercover social media data-mining contractor

Yes, it turns out the Army is in the midst of looking for a data mining contractor to dredge up threats around the world. And many illuminating details about the project have shown up on a government job board.

An ad for the contract first appeared Tuesday on the FedBizOps website operated by the General Services Administration. The posting was first noticed by Bob Brewin of Nextgov.

The contract is being offered by an Army contract shop in Europe, Brewin reports. It seeks a firm that would do social media data mining looking for threats that could impact the Army’s European Command, which is responsible for operations throughout Europe, as well as Israel and Russia.

The contract, which goes by the long and technical name “Social Media Data-mining, Localized Research, Market Audience Analysis and Narrowcast Engagement Requirements,” seeks a firm that will carry out “strategic communications, operations to engage local populations, build interagency partnerships and identify violent extremist influences,” emanating from regions around the world.

According to Brewin, this is an unusual disclosure of information, although many more details remain hidden.

“I consider the unclassified info on FedBizOps a real gift for my daily trolling of federal digital cupboards,” he writes.

In the 21st century, social media has become an important battleground for nations and militaries. In addition to data-mining activities like this, other parts of the U.S. government use social media as a means of spreading pro-American messages around the world, particularly in Arabic countries.

For instance the State Department employs a Digital Outreach Team that has grow substantially under the Obama administration to include 50 full-time native Arabic, Punjabi, Somali, and Urdu speakers. Their job is to go on message boards and engage with users to foster positive feelings toward the U.S. In 2012, the team had 7,000 online engagements, though not all were positive.

And America isn’t the only nation concentrating its national defense on social media. Last year in Israel, defense forces allocated $778,000 to recruit an army of mostly college-aged social media users to use Twitter for promoting that country’s interests online.