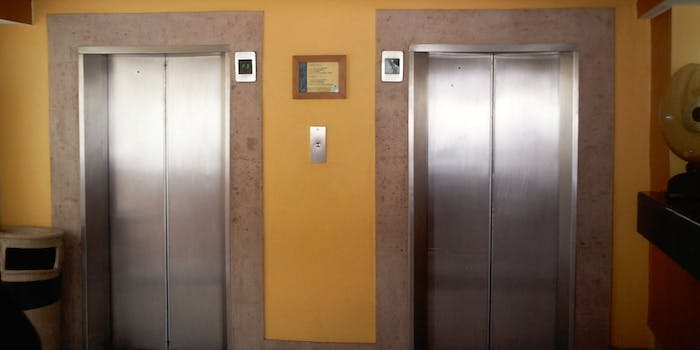 No Exit: Why are anti-Trump conservatives constantly trapped inside elevators?

This has the makings of a vast conspiracy.

Just as Winston Churchill once vowed to ally with the devil (Slavs) to defeat Adolf Hitler, this year’s election has brought together all kinds of ex-nemeses in opposition to Donald Trump and the sick, twisted, meme-literate political shock troops known as the “alt-right.”

In particular, there exists a band of serious, respectable conservatives who work at publications with names like the Liberty Sentinel and the American Standard who, perhaps for the first time ever, can agree on something with Hillary Clinton. Their battle cry is #NeverTrump.

John Podhoretz, the son of neoconservative intellectual Norman Podhoretz and therefore the editor of Commentary magazine, has led the charge: He calls Trump the “American id” and, in an interview with the war journal Town & Country, declared the alt-right his “Twitter enemy,” and “a congeries of monsters.” His brothers-in-arms include fellow neocons at the Washington Free Beacon; right-wing radio superstar Glenn Beck; National Review commentator and son-of-Linda-Tripp’s-friend Jonah Goldberg; and, of course, Texas Sen. Ted Cruz, Trump’s fierce and unyielding primary opponent. They will not bow down; they vow to expel Trump and his racist minions from the Grand Old Party.

There is only one thing holding them back: At any given moment, every one of these men is likely to be trapped inside of an elevator.

“Hi, @HomeDepot! Having a lovely afternoon at your Seven Corners store stuck in the elevator to the upper level of the parking deck,” tweeted Free Beacon executive editor Sonny Bunch in March.

Bunch, whose job is to watch Netflix and provide conservative readings of The Unbreakable Kimmy Schmidt, was rescued by the Fairfax Fire Department without issue. But this was not an isolated incident.

“Are you kidding me. I’m trapped in an elevator again,” lamented Bunch’s colleague F. Bill McMorris in January in a tweet since deleted. (The word “again” stands out.) McMorris, who holds down the “unions are bad” corner of the labor beat, then issued a public service announcement: “Im out. Don’t use the left elevator nearest @FreeBeacon entrance.”

Nothing too alarming here. The Free Beacon must simply have a faulty office elevator, right? Wrong.

I'm literally trapped inside a Monorail at Disney World pic.twitter.com/cpFHnhRbA3

At first glance, Podhoretz would appear to break the pattern, victim to a faulty train rather than an elevator. But sure enough, his archives reveal that he once suffered (caused?—we have to start asking that) a broken elevator while riding with actor Art Carney.

Oh yeah? Well, I was once trapped in an elevator with Art Carney. https://t.co/hDnSmOuTfR

A picture begins to emerge of an epidemic affecting a certain breed of anti-Trump conservative: “Got trapped on elevator last night in nyc with 11 folks including four kids. Thanks for @FDNY who got us out,” tweeted former George W. Bush man and Trump critic Matthew Dowd in May.

Got trapped on elevator last night in nyc with 11 folks including four kids. Thanks for @FDNY who got us out. bravo. pic.twitter.com/osAZilwejI

How deep does it go? In 2011, Glenn Beck told his listeners about a squabble with progressives who held up his elevator by manually preventing the doors from closing, and hinted further: “I’m thinking, this is gonna be another long-ass elevator ride.” The Daily Caller’s Sean Medlock, alias Jim Treacher, once tweeted that he fell victim in 2009, and also shares Podhoretz’s tendency to get stuck on trains.

I'm stuck on a stopped train in New Rochelle. They can't completely close the bridge ahead of us, so we haven't moved for over 90 minutes.

“Disturbing,” tweeted Jonah Goldberg in 2014. “Every elevator I’ve been in today has behaved erratically.”

Disturbing. Every elevator I've been in today has behaved erratically.

Disturbing, indeed. Not even Ted Cruz, a sitting senator, is safe. “Who put Donald Trump in charge of the elevators?” the onetime Republican candidate quipped after getting trapped in one at a campaign stop in South Carolina.

Cruz played it down with a joke, but the pained, inhuman expression on his face suggested the experience had rattled him.

Even the ghosts of good conservatives haunt the elevators: Later this month, America will commemorate the 32nd anniversary of President Gerald Ford getting stuck in between floors in the Van Pelt-Dietrich Library at the University of Pennsylvania.

The evidence is undeniable. As the alt-right has gained prominence, it has accelerated the development of its equal and opposite reaction, the “elevator-right.”

This is a story completely ignored by the mainstream media. Yet, like Hillary Clinton’s secret history of flesh-eating disease, it demands answers. What is causing so many (primarily) middle-aged, pear-shaped conservative men to become trapped inside elevators?

Only a more thorough investigation will produce a satisfying answer, but in the meantime, this correspondent has sketched a short list of possible lines of inquiry.

A final thought: One natural explanation for this phenomenon would be political sabotage. After all, the elevator-right has the power to derail the mogul’s entire candidacy with a single strongly-worded issue of any one of their subsidized, low-circulation magazines. It makes sense that Trump would take them seriously enough to dispatch a Nixon-esque task force of henchmen to contain these templars inside steel boxes across the nation.

But a bombshell report from July, largely unnoticed, must be seen to be believed: Prior to a campaign rally, Donald Trump himself “got stuck in a hotel elevator and had to be rescued by Colorado Springs firefighters.”

What could it mean? Is it a question for science? For Werner Herzog? We may never find out. But it almost makes you wonder if Trump and his conservative critics have more in common than either faction would like to admit.