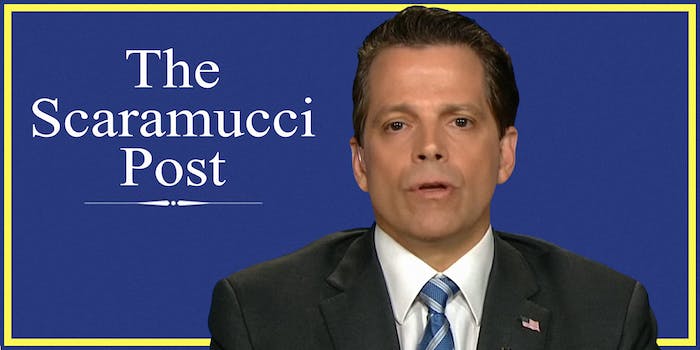 The Mooch is back.

Did you, like most red-blooded Americans, love every single second of the Anthony Scaramucci era?

And did you, like most Americans, become instantly forlorn at the lack of Scaramucci in your life when he was unceremoniously dismissed by President Donald Trump‘s new chief of staff?

Have you, like all of us, been wandering around aimlessly, desperate to feel that same unfettered bliss you encountered whenever a push notification about Scaramucci came on your lock screen?

Well, get ready to have that Scaramucci craving satiated. Because Scaramucci is BACK.

You may be wondering what the hell the Scaramucci Post is.

Well, unlike its open and haphazardly honest founder, Anthony Scaramucci, this appears to be a tightly held secret. It’s definitely something. Possibly media related. Perhaps a Skimm-style newsletter from Scaramucci himself? What about a new website full of insider information like Axios? Nobody knows. Because literally, all it is right now is one Instagram post and some tweets (which, honestly, given the media climate these days isn’t the worst content strategy—but that’s neither here nor there).

Without a lot of information, Twitter was left to run amok.

— i have digital coronavirus do not talk to me (@GarlicCorgi) September 13, 2017

Whenever we do find out what it is, we’ll be sure to let you know.