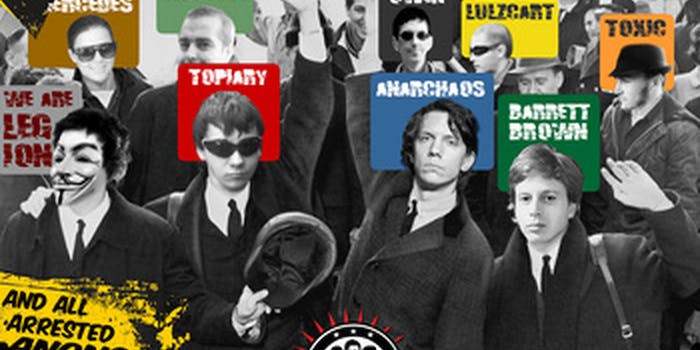 The compilation is available now on Bandcamp.

We didn’t expect this. Maybe we should have.

The Anonymous Solidarity Network has just released Hear Us Now, a compilation album on Bandcamp. Proceeds go to support the network, which helps incarcerated Anons with legal expenses, administration, and in some cases even helps out with commissary money.

This particular effort is focused around activist Jeremy Hammond (Anarchaos), currently imprisoned pending trial for being a part of LulzSec. That’s the crew who hacked Stratfor, a private intelligence company, handing over to WikiLeaks what came to be known as the GI (Global Intelligence) Files.

Apparently, the FBI had been monitoring the transaction with WikiLeaks, hoping the whistleblower site would pay for the documents, providing grounds for an espionage case. As soon as the files were leaked without payment, the feds arrest five American members of LulzSec in one day—including Hammond.

Only one member of the group was not arrested, Sabu, their supposed leader, who had been an informant for months. These days you just never know who your friends are.

But Hammond does have some real friends, and they’ve put together an album blissfully long on talent and short on dubstep (okay,there’s some). The coming-soon physical CD will be a double album, but you can preview and download all 27 tracks right now on Bandcamp for $15. Cover art features incarcerated and newly-emancipated Anons like Barrett Brown, T0xic, Topiary, and no, not Sabu.