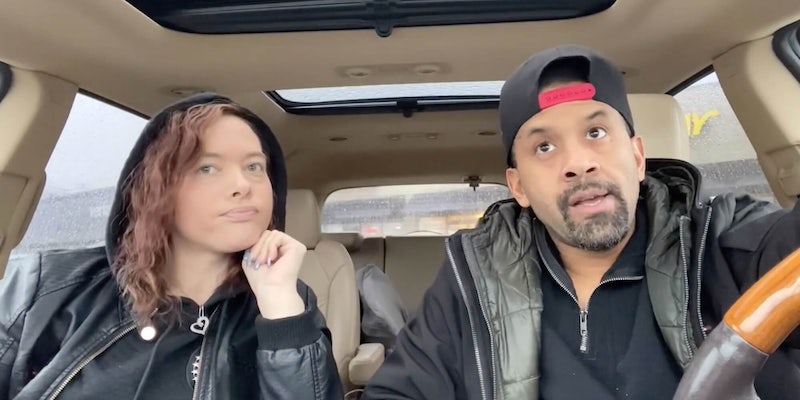 At this point, do the masterminds behind TikTok account Angelmamii7 need an introduction? Anointed by the internet as genius, Angel Mamii and John Dees’ TikTok videos ripple across pop culture and receive a lot of attention. From people claiming they’re revolutionizing sketch comedy to crowning them the first TikTok auteur, the couple have tapped into something that both surprises and resonates with denizens of the internet.

Their work is hard to describe. The best way to understand it is by watching one of their videos.

Losing it over the energy in this tik tok rn… not one point was made pic.twitter.com/LOmP2pyraC

In her first video to go viral, Angel and her son have a dialogue about chargers in a store aisle. That sounds like it should be a fairly boring, normal conversation, right? Nope. The two teeter between being seemingly in on the joke—that there’s no point in the video— to delivering the lines with aplomb. The lines veer off track like a Sims character going rogue and every second of the exchange cartwheels somewhere unexpected. And, remember, the whole conversation revolves around chargers.

On a platform where trending challenges dominate the content, Angelmamii7’s videos provide the gleeful, refreshing experience of something that rejects having a point or easy digestibility as a necessity.

Angel and John met last year at a TikTok creator meetup. But before creating content together, and even being on TikTok, they started out on Musical.ly, TikTok’s previous incarnation. Musical.ly blew up amongst teenagers who used the app to film short lip syncs to songs. Then in 2018, ByteDance bought Musical.ly, merged it with another company, and rebranded it as TikTok.

“I got into Musical.ly because of my daughter. We were doing videos together,” John told the Daily Dot. Both John and Angel weren’t creating any content close to what they make on TikTok now. “We were doing lip sync videos, which you know, is what Musical.ly was known for,” said Angel.

“When they were closing down [Musical.ly] accounts, I had to make a new account [on TikTok]. I lost all of my old accounts’ followers, but that turned out to be a fortunate thing,” Angel added.

A very fortunate thing, indeed. Angelmamii7 boasts over 600,000 followers, and it all stemmed from two fateful videos reposted on Twitter. The first being the chargers video, and the second being a video revolving around milk.

John said that when he saw the chargers video Angel filmed, his response was, “This makes no sense, but it’s funny?” The reception was unexpected. “We had no idea it blew up until people started emailing Angel, asking her about a video on Twitter,” he said.

And no, Angel did not write a script for either the chargers or milk video. In general, Angel and John don’t prepare beforehand for their videos. They usually drive around, pick a location, and start improvising. “We are also self-aware, aware that the videos don’t make sense, which is also something that everybody wants to know,” John said.

Another trademark of Angelmamii7 videos are the videos’ settings in shopping centers and malls that feel ubiquitous. Literally, they could be filming in any supermarket located in any part of the country. “Someone suggested that these were good locations because the algorithm likes them, and that’s why we initially started at stores,” John explained. Fair enough. Next, they plan to try out abandoned locations. “Angel likes horror and we’re thinking of doing more,” he said. “We recently did one where we were stuck in the elevator.” Angel added, “I like Freddy Krueger, Friday the 13th, and that stuff.”

Strangely, horror is a genre that seems like an easy crossover for Angel and John. Even though most people would agree they produce comedy, their videos contain elements of uncanniness or at least inspire a sense of hilarious discomfort. For example, mid-way through the chargers video, Angel’s son says, “Androids are trash. They make a living.” Angel then responds, “Obviously, iPhone make a living too. Are you ready to cash out?” What does this exchange mean? What does “Androids make a living” mean? What do Angel and her son know about Android and Apple that we don’t?

“I truthfully needed chargers that day,” Angel said. “My son asked me if we were going to make a video before we leave and I said, OK! Take the camera and film!” Of the Android and iPhones lines, they were “trying to say Androids and iPhones will always be in business! But from our experience with Androids they always broke down, they were slow and not as advanced as the iPhones we have now! But there is no hate on Androids because they are still making a living and will always be in business!”

She concludes, “That just came to our heads and honestly I didn’t know it was going to go viral like it did! But someone had to say it!”

Angel and John also aren’t stopping at TikTok. They also have a YouTube channel called Johns and Angels World. The couple explained why they opened the channel, recalling what happened with Vine. “YouTube is more stable of a platform than Vine—which closed down.” It’s also a way to consistently monetize views on their content since there’s no way for them to do so on TikTok.

John said they’ll post mostly vlogging, skits, and behind-the-scenes content this year. That includes a longer-form skit that will be exclusive to their YouTube channel—of which they have released two episodes.

There’s not a specific YouTuber or channel style that the skit takes inspiration from. Angel stated that she doesn’t watch much YouTube content and mainly watches music videos on the platform. But she added that she loves Lele Pons and hopes to collaborate with her one day. “I’m going to hit her up once I get that verification check,” she said. John, on the other hand, mainly watches vloggers—Roman Atwood and Shaytards are a few names that he throws out. He’s also a big fan of King Bach for comedy content.

And the couple may expand their videos beyond YouTube. “We’re interested in short films, movies, and T.V. shows,” said John. “We’re not there yet, but of course we’d love to.”