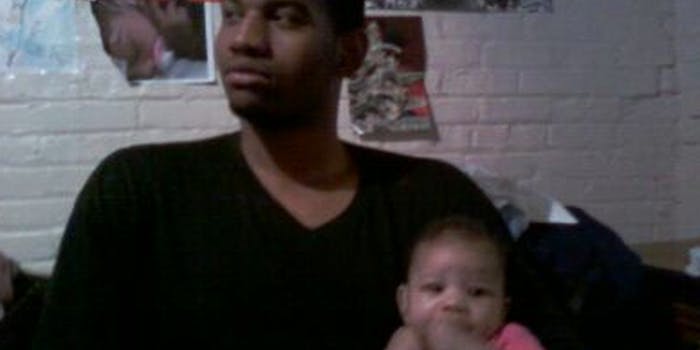 Andre Curry, 21, was acquitted of unlawful restraint, but still faces battery charges for what he says was a harmless joke.

A father accused of taping his daughter’s mouth closed and her arms together, and then posting the pictures on Facebook, was acquitted Tuesday of unlawful restraint.

Andre Curry, 22, told a Chicago court that the Dec. 2011 incident was a misinterpreted joke and that he and his daughter were just playing around. He still faces two counts of domestic battery which will be decided on Nov. 8.

Curry said he wasn’t thinking when posted the picture of the then-22-month-old-daughter on Facebook with the caption “This is wut happens wen my baby hits me back. ;).” Curry’s sister testified that the toddler was laughing after the tape was pulled off her.

Charles Hollendoner, a Chicago police detective who interviewed Curry, also said the father insisted that the incident was a joke.

“He said he was just playing with the child and didn’t mean any harm,” said Hollendoner, according to the Associated Press. “He said the child was only taped up for a maximum of 30 seconds.”

Hollendoner also told the court that he discovered no bruises on the baby after Curry’s friends on Facebook reported the picture. Curry told Hollendoner that the taping wasn’t a retaliatory action after the daughter slapped him and they kept playing.

One of the Facebook friends who reported the picture to the police is the baby’s mother. Yesmin Doss, 21, testified for the prosecution and said she didn’t find the picture funny but said Curry is a “very good father.” She is currently living with the child.

Curry has set up a website raising funds for his defense.