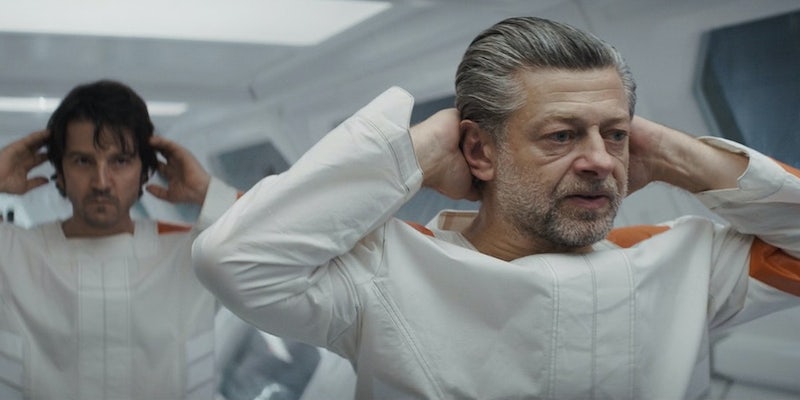 Breaking down the best line in ‘Andor’ episode 9

In a franchise that usually thrives on conventional action/adventure tropes, Andor is shockingly unpredictable. Often this involves puncturing our expectations for how “good guys” should behave, replacing flashy heroics with grimy moral quandaries. Episode 9 comes at this idea from a fresh angle, ending with Kino Loy (Andy Serkis) abruptly forging an alliance with Cassian Andor.

Introduced in episode 8, Kino Loy is an inmate in the Narkina 5 prison, working as the shift manager for a floor of slave laborers. As an Imperial collaborator, he’s easy to pigeonhole as a villain. But as the prison’s balance of power begins to shift, he becomes an unlikely target for Andor’s central question: At what point do you risk everything to fight an oppressive regime?

The crucial factor here is Kino’s pragmatism. While he’s hardly a nice guy, he’s not a total sadist either. From his perspective, he’s just making the best of a bad situation, grabbing some power while he awaits the end of his sentence. But as rumors begin to spread about problems elsewhere in the prison, his confidence wavers. The lights flicker on and off, suggesting that the electrified floors might not be such an inescapable threat.

Sensing weakness, Cassian chips away at Kino’s loyalty to the system. “You never think about escaping?” he asks one evening, probing for details on the guards’ patrol habits. Kino refuses to answer, but Cassian plants a seed of doubt. “You think they’re listening?” he scoffs. “You think they care enough to make an effort?” The prison is a panopticon, designed to convince everyone that they’re under constant surveillance. But is the threat actually real, or are the inmates just ruled by fear?

Kino Loy’s breaking point comes with the death of Ulaf, an elderly man who suffers a stroke. Instead of offering treatment, the medic—another inmate—euthanizes him on the floor of a public corridor. “He’ll pass peacefully, which is more than I can say for the rest of us,” the medic says darkly, revealing the real reason behind the troubles elsewhere in the prison. Apparently, the Empire has stopped releasing inmates at the end of their sentences and is just circulating people back into other parts of the system.

Without the promise of freedom, Kino no longer has any incentive to enforce the rules. As he and Cassian walk away from Ulaf’s body, Cassian asks how many guards there are on each level. “Never more than 12,” replies Kino, staring straight ahead. Roll credits.

This line blew up on social media after the episode aired, for obvious reasons. As the Empire’s regime grows more cruel and oppressive, Cassian’s life has been going from bad to worse. He really needed a win. But even here, Andor avoids straightforward heroics.

Like in Rogue One, one of Andor’s recurring themes is that “normal” people have more power than they think—and that doesn’t just mean characters who join the Rebellion outright. Kino’s decision is essentially self-serving. He isn’t motivated by a political or moral argument. After collaborating with the Empire for personal gain, he realizes that the only way out is through solidarity with his fellow inmates. The show delivers this incredibly satisfying heel-face turn without sacrificing any of its realism.

Will Kino become a Rebel hero? Right now it seems unlikely, but you could say the same of Ruescott Melshi, who will eventually become one of Cassian’s staunchest allies. The Empire thinks it can force people into predictable patterns, controlled by fear and habit. But as we’ve seen again and again, everyone has their breaking point.