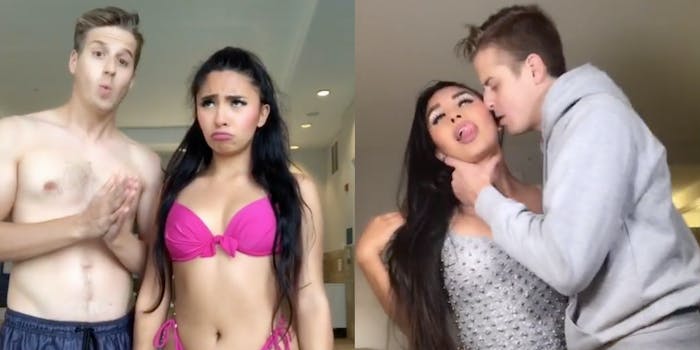 These viral TikTokers are a couple—and say they’re stepsiblings

Why @alphafamilia is one of the most cringe-worthy couples online.

The duo behind the viral TikTok account @alphafamilia, stepsiblings Diana Camila Avila and Jordie Vena, shot to popularity on the platform thanks to their shared account. The controversial nature of their apparent relationship as both stepsiblings and a couple certainly helped.

Camila Avila and Jordie Vena: Are they really stepsiblings?

There’s a lot to unpack here, so let’s start with the stepsiblings claim. Typically, claims that a popular TikTok couple is actually a sibling duo would be attributed to rivals and haters. Such is not apparently the case with the Alphas, as they call themselves (we’ll get to that cringe detail later).

In fact, the Alphas use their problematic relationship as a hook in most of their content. A number of uploads play on the notion that these stepsiblings are in a romantic relationship for views, and it’s working. The joint account has collected more than 456,000 followers and nearly 7.5 million likes. They joke about their “parents” walking in on them filming a video together.

It appears that the controversial relationship is the real secret behind why the account has become so popular online. Like a train wreck, it appears that people just can’t help but take a look, even knowing they’ll regret it.

And regret it they will. Because ultimately, the fact that these two are stepsiblings is just the start. Let’s move on to the “Alpha” issue.

That’s right, the male half of this team refers to himself as “the Alpha.” He leans into this identity hard in uploads, many of which feature him fighting the air, or a tree, or the camera, or… pretty much anything he can find.

Vena is clearly poking fun at the idea of alpha males through his agonizingly awkward posts. He doesn’t pull it off. Rather than subvert on the toxic idea of masculinity his videos portray, Vena just comes across as a sexist jerk. Regardless of any attempts at humor, Vena is far too often seen choking out his partner/sibling, demeaning her, or starting faux fights with strangers. It’s not a statement, it’s just attention-seeking and gross.

Honestly, this may be the worst part.

In the vast majority of @alphafamilia’s videos, the female half of the duo, Avila, speaks in a high-pitched baby voice that will make you want to tear your eyes out.

Baby voice is cute in babies. That’s it. Once you become anything past a toddler, baby voice is nothing more than grating, obnoxious, and in the right circumstances, manipulative.

Perhaps the most nauseating takeaway from @alphafamilia’s account is the stark example these siblings provide of the worst stereotypes about men and women.

The Alpha displays toxic masculinity in all its worst forms. His perpetual aggression, obsession with sexuality, and blatant disloyalty are all a show, but that doesn’t make them any less unpleasant.

Avila, on the other hand, presents herself as a vapid, self-centered, idiotic leech who expects the world while treating her partner like scum. Her character is the perfect match for Vena’s Alpha, but that doesn’t soften the blow to decades of progress in women’s rights. Her personality in the account’s uploads can be boiled down to her physical attractiveness and controlling nature.

If the account were in any way attempting to shed light on these gross and outdated notions of what makes one feminine or masculine, it could be interesting to watch. Instead, this pair leans into the worst possible caricatures of humanity for their own popularity and profit.