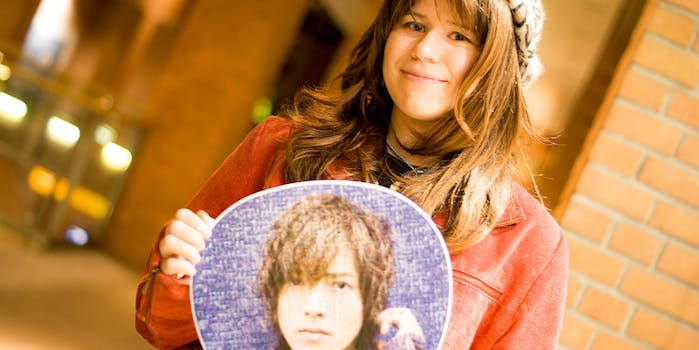 Don't underestimate any demographic that's capable of turning you into a worldwide meme within a matter of hours.

Depending on which corner of the Internet you frequent, you may have noticed a phenomenon blowing up this weekend: A teenage Target employee suddenly became a memetic sensation that rapidly evolved into dozens of spinoffs. It was a testament to the power of the Internet, but it was more than that. It was also a highlight of the power of fangirls, the relentless tide of teenage girls who are among the most active demographics on the Internet.

Ninety-five percent of teens are online, and they’re all up in your YouTube, Twitter, Instagram, Facebook, and more. They’re not just following the memes: They’re making them. Some of the most popular new media online is teen built or teen-oriented; look at the megalithic empire that John Green has created online, for example, or the explosion of teenage “haulers” who have become online fashion celebrities. Teenage girls dominate YouTube in particular, and they’re all over Tumblr.

Alex’s photo was taken at an unnamed Target and rapidly circulated through Twitter before being turned into a myriad of memes that quickly expanded into the formula of “[Service worker] from [business].” He became a minor celebrity so quickly that he barely had time to grapple with his explosion in Twitter followers, and even made a joke about having to change his number. As BuzzFeed noted, a bunch of teenagers had managed to turn an ordinary guy into an Internet meme overnight. He’s even become the subject of some racy RPF—real person fanfic.

But it was more than that: This was specifically an instance of teenage girls turning someone into an Internet meme. Caitlin Dewey at the Washington Post pointed out that this is not a new phenomenon; in fact, teenage fangirls make or break reputations online on a regular basis.

[T]he mainstream Internet tends not to take them seriously. That is, quite obviously, a mistake: The fangirl faction isn’t just young, connected, and highly motivated to tweet about its causes; it’s also enormously savvy about the way Internet communities work and what mechanisms control visibility within them.

“Teens are good Internet detectives who love to follow babyfaced angels on Twitter,” said Dayna Evans at Gawker, tapping into the power of teenage girls, and to the fangirl in particular. Yahoo’s Alyssa Bereznak just seems confused about why anyone would care, meanwhile, but she’s missing a very big point: Alex From Target matters because of what he says about teen girls on the Internet, and the response to the meme matters because of what it says about how we think about teenage girls.

Socially, we tend to think of teenage girls as blithering, useless airheads who exist primarily to squeal about Twilight, shriek about Harry Potter, screech over the Hunger Games, and make other loud, sharp noises over various media franchises. Or they’re online doing girly things like talking about makeup and trading pics of cute boys, while offline they’re painting their nails (using nail tutorials they found on the Internet, natch) and playing Pretty Pretty Princess.

Teenage girls aren’t really human beings until they’re old enough to start being sexually harassed, in which case they’re either women or sluts, depending on who’s doing the telling. For women, at no point in their lives are they actually treated as social equals. While teenage boys may be stereotyped and at times socially undermined, society reserves its most vicious and nasty treatment for teenage girls.

Girls are worthless, girls have nothing to add to society, and all of their interests and pursuits are juvenile and stupid. They’re not like boys, who have serious and important things to do, especially online—yet, notably, it’s actually teenage girls and young adult women who are among the Internet’s most visible superstars, bolstered in part by their huge and loyal fandoms. Teens and young women may be talking about feminized pursuits like cooking, sewing, makeup, and fashion, but they’re also talking about books, science, and more. They’re playing an active role as cultural commentators and tastemakers. Yet, they’re still treated as socially irrelevant or juvenile for loving what they do and loving it so intensely.

Which is odd, because teenage girls exert tremendous market forces. Writing at The American Prospect, Sady Doyle notes that:

Yet, if the numbers are any indication, you don’t need male fans to dominate the marketplace. In this decade, teen girls have backed the success of Taylor Swift (who ranks above every artist on the pop charts except for Michael Jackson), Miley Cyrus (responsible for multiple best-selling albums, a television series, a concert film, a movie, and various merchandise including a best-selling book), and the blockbuster movie franchise High School Musical. In the 1990s, teenage girls were responsible for the runaway success of Justin Timberlake, Britney Spears, and Titanic, the top-grossing movie of all time. A fan base of teen girls launched Madonna‘s multi-decade career. And there was that 1960s boy band—the one with all the catchy, cheery pop songs and the cute, nonthreatening members who made girls squeal. I believe they called themselves The Beatles. ??

Fangirls are referred to as “crazy,” “extreme,” “stupid,” and worse—even the TV Tropes article on the subject can’t help but dip into trashing fangirls on some of its associated commentary. What many of those criticizing fan culture neatly skip over is that the vast majority of the people they’re painting with strong pejoratives are teenage girls and young women, so their scorn comes with a heavily gendered component, and one that reinforces the notion that teenage girls, and their opinions, are worthless.

In terms of pure economic value, fangirls can spell the success or failure of a franchise (there’s a reason the term “fan service,” as in, something included as a nod to fans, exists). They can determine what gets turned into a media phenomenon at all, with teen-oriented content spilling over from networks like the CW to ABC and NBC, and YA publishing exploding at all of the “big five” houses. Especially in corners of the market aimed specifically at teen girls (with all their delectable disposable income) and young women, it’s critical to play to the fangirl demographic, which is why musicians, TV stars, and others are so eager to engage with their female fans and cultivate their almost cultish followings.

To return, for a moment, to John Green’s media empire, it’s no coincidence that the author became famous and has a massive web presence; he might have been yet another YA contemporary author, but his huge fanbase ensured that The Fault in Our Stars and other books launched to the bestseller list and stayed there week after week. With filming starting on the second adaptation of one of his books (Paper Towns), Green has his fangirls to thank.

But fangirls also play an important social role. Whether adults disdainful about the value of teenage girls want to admit it or not, they’re participating in the development and direction of taste in society. They’re determining not just the shape of current media, but the next generation of media; producers, editors, and others with the power to determine what gets through the gates at film and television studios, publishing houses, and record studios are paying attention to what teenage girls want, because they’re a huge cultural force. Some have cast this negatively, as seen in the series of essays bemoaning the rise of young adult fiction and claiming that its popularity is ruining us all as a society.

This would be a mistake, though, because deriding an entire demographic on the grounds that their taste is “childish” devalues their contributions to society as a whole. It was the teens of the 1980s and 1990s who gave us riot grrrls, teen girls in the ‘60s who overturned social attitudes about sexuality and relationships, and, further back, young women who fought not just for the vote but for abolition, independence, and religious freedom. Teenage girls have been fighting social attitudes for a long time and still coming out on top, which reflects some serious resilience.

Maybe the Alex From Target phenomenon seems utterly mystifying and weird to those who aren’t familiar with fangirl culture and how the world of the Internet works, but there’s nothing remarkable about it to those who know the ins and outs of memes. And whether you like it or not, teens are the people who are making major cultural decisions right now. They’re the ones creating globally trending hashtags, driving bands to the top of the Billboard list, and ushering in a new generation of American culture. #getwithit

Update, 10:22pm CT, Nov. 4: The plot thickens, as Alex and the two teens who allegedly took the photo in the first place have distanced themselves from Breakr.