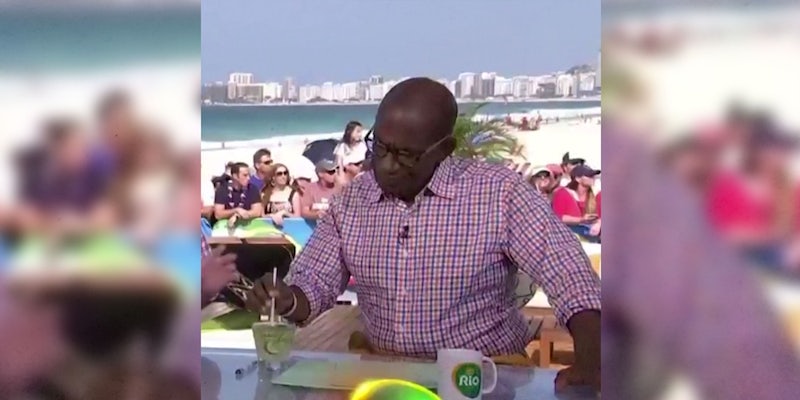 The anchor was not having it.

If anything good came out of the whole Ryan Lochte lying about getting robbed in Rio scandal, it was Al Roker becoming a full-fledged meme.

As details emerged that the American swimmer made up pretty much the whole story about being mugged at gunpoint, everyone quickly called out the athlete’s Olympic-level bullshit. Friday morning, the Today anchors were discussing the whole situation. But when Billy Bush kept on trying to defend Lochte, that’s when Roker shined brightest.

Instead of going completely berserk on Bush (which we totally would’ve been OK with), Roker held his composure, furiously stirring his drink.

Bush arguing that he’s just trying to play “devil’s advocate” is extremely grating, but at least we got to watch Roker’s reactions. And, of course, the internet caught on to Roker’s method of keeping himself occupied while Bush talked nonsense.

When the waiter says they charge for chips & salsa. https://t.co/ztNkhR1s6S

@ebrojiapp is the Al Roker "gtfoh" drink stir a gif yet? pic.twitter.com/yi2kSXa2N4

There have been several comparisons between Roker’s drink-stirring and the Kermit Sipping Tea meme. Both invoke a level of annoyance with the situation at hand while semi-passively-aggressively focusing on your own business. For Kermit, it’s his cup of tea, and for Roker, it’s the drink on his desk. It’s the perfect level of shade.

Furthermore, there was the hilarious hypothesis that Roker was so damn annoyed because he and Bush showed up to work wearing the same thing.

It’s the perfect possibility to pile on top of Roker’s grievances against Bush for trying to defend a lying swimmer. It would make Roker’s completely warranted rage complete with a side of petty.

Roker arguably stirred his drink with such purpose that it has helped shake awake the several companies that have pulled their partnerships with Lochte as of Monday. And we can all imagine hearing Roker say “but that’s none of my business” about that news.