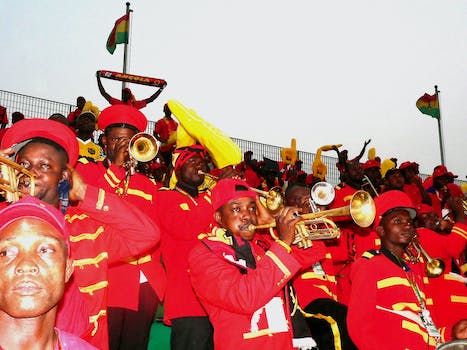 The viral chaos of the African Cup of Nations

And why you should livestream Sunday's final.

Fan interference and violence interrupted the African Cup of Nations’ semifinal between Ghana and Equatorial Guinea Thursday. The game was a chance for Equatorial Guinea, the host nation, to advance against all odds to face most folks’ pre-tournament favorite, the Ivory Coast, in Sunday’s championship.

The Ghanaians advanced to the final 3-0. But the hosting fans didn’t go quietly. The first incident occurred in the 42nd minute, when Equatorial Guinea goalkeeper Felipe Ovono committed this gem of a defensive foul to give up a penalty that Ghana would then convert.

Fans, of course, began to throw objects onto the field.

A linesman had to flee some renegade objects launched his way early in the second half, which briefly halted proceedings. Then in the 82nd minute, trailing 3-0, the home fans decided to just rain down all out hell on the small contingent of Ghanaian fans—pelting them with water bottles and cans. Finally the Ghanaians sought refuge onto the field, causing the game to be suspended for 30 minutes.

At one point, Equatorial Guinea captain Emilio Nsue attempted to calm the crowd as he took to the PA system, but it was to no avail. Choppers were brought in, many fans left the stadium, tear gas may or may not have been fired into the stands, and most of the Ghanaian support had to be evacuated through a tunnel, before three extra minutes were played and Ghana was deemed the victor and progressed to the final.

Police helicopter hovers above the pitch with the #Ghana fans in real danger. It's now like a war zone. #AFCON2015 pic.twitter.com/9s7UkrYxQF

Relating soccer to an American audience is generally tough because, most of our sports are understood in cultural terms. That soccer really is no more difficult to understand than college football or hockey doesn’t matter to so many stateside, it’s foreign and they aren’t interested.

But you should be watching the African Cup of Nations. Especially if you dig the World Cup.

Historically, African nations are like mid-major schools in college basketball­­—they don’t and haven’t had the infrastructure or resources to be as successful as the big boys in Europe or the traditional powers in South America. But there’s real talent here and as the game evolves African squads have continued to inch closer to challenging consistently on the world’s stage, with Ghana nearly making the semifinals of the 2010 World Cup before Luis Suarez went all Dikembe Mutombo on the goal-line and Ghana inexplicably missed the resulting penalty kick and later crashed out on penalties.

Anyway, what’s great about this tournament is that it’s sort of like if you took March Madness and held it at some high school kid’s graduation kegger. The tournament outcome is insanely difficult to predict and is almost never won by the best and most talented team.

As with any high school analogy, this year’s tournament has had more than its fair share of drama, and I’m not talking about the results.

First, Morocco, the original host, had to pull out due to concerns over the Ebola epidemic. So with 64 days to go before the tournament, who steps up? Equatorial Guinea. You’re probably thinking, “Hey that’s cool, a small country I’ve never heard of that probably wouldn’t get a shot at hosting can use this opportunity to puff its chest out and gain some notoriety.” Well, Equatorial Guinea co-hosted the last tournament in 2012, a curiosity considering that the small nation has never been soccer relevant; it does rank in the top 15 as one of the most corrupt countries in the world, according to Transparency International. Impressive.

Furthermore, hosting the tournament now gained the Equatorial Guinean national team inclusion into the tournament—one that it was thrown out of five months prior for fielding an ineligible player.

Equatorial Guinea should not be confused with Guinea’s team and players, who are probably the greatest story of the 2015 tournament and a documentary waiting to happen, as they somehow qualified while playing all of their home games away in Morocco. And while their country was absolutely ravaged by Ebola. They then somehow made it to the knockout rounds.

How to watch Sunday’s African Cup of Nations final

While this is all far from ideal, the tournament at least is taking place in a welcoming nation with the infrastructure to handle visitors. Kind of.

According to a British report, Congo’s national team arrived to find that there weren’t enough beds to accommodate the 35 members traveling with the national team at its hotel in Bata. Tunisia’s squad showed up to discover there was no electricity where it was staying in Ebebiyin. When the Tunisians came back a couple of hours later with the lights actually on, well, things were worse. The hotel had no running water, no bed sheets, no towels, no televisions, and no soap.

Oh, then there was the really fun resource relay in Mongomo, where the four teams staying there had to literally draw balls from a bowl to see which got to use the practice field. With this chaos, all bets are off and the tournament should be considered wide open, and really it has been.

The tournament’s feel good story, Guinea, made it out of the group stage, surprisingly, and into the quarterfinals before it ran into a sturdy Ghana squad, one that along with the Ivory Coast, has the most name recognition among European and American audiences and has been one of the most successful teams on the continent in the last decade. Following an avalanche of tied games, Guinea advanced over Mali by, you guessed it, drawing balls out of a bowl.

Someone write the Disney movie already.

Even more mystifying is Equatorial Guinea, the previously disqualified, cheating, corrupt team that fired its coach three weeks before the tournament. It qualified out of its group and into the quarterfinals against one of the tournament’s darkhorses, Tunisia, where it then, and again, you’ll love these circumstances, won thanks to an obscene penalty kick awarded by a referee who has since been banned from African soccer for six months.

Fuming, Tunisia went into blast mode, with a spokesman saying it “suffered scandalous injustice from referees.” When Tunisia was asked to apologize and refused, the Confederation of African Football levied a ban from the next Africa Cup of Nations tournament in 2017 saying the Tunisian FA had insinuated “bias and lack of ethics against CAF and its officials, [and] to present irrefutable evidence to substantiate the accusations.”

Admittedly, this was a pretty sweet goal.

I could very easily preview Sunday’s final between Ghana and the Ivory Coast, which is actually going to be a very star-studded affair with a lot of names you might actually recognize, and may turn out to be a wonderful game you won’t want to miss (both squads have narrowly missed out on winning the tournament over the last two decades), but I have no idea what’s going to happen off the field this weekend. Just know that Equatorial Guinea gets to play one more consolation game, and that should be all sorts of fun.