Now you can donate to help the victims of the Bowling Green Massacre. And it turns out the proceeds will go directly to the American Civil Liberties Union (ACLU) as it continues its legal fights with the Donald Trump administration.

In the days after Trump adviser Kellyanne Conway completely made up a terrorist attack that she said occurred in Bowling Green, Kentucky, her make-believe event was savaged by internet users, and people mockingly marked themselves safe from the attack on Facebook.

Now, somebody is getting the ACLU involved in the troll job.

If you log on to the Bowling Green Massacre Victims Fund website, this is what you’ll see. 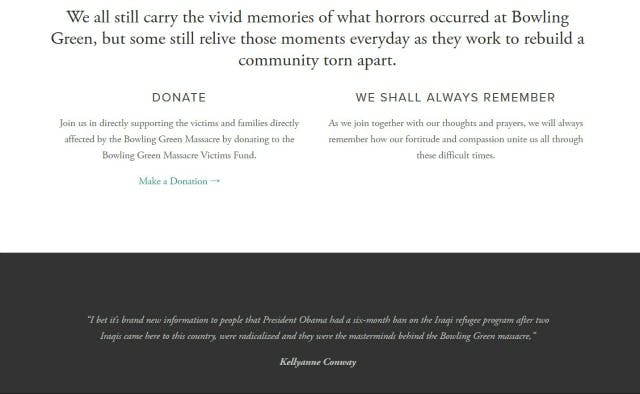 If you click on the Make a Donation page link, it brings you directly to the ACLU’s website. For context, the weekend after the ACLU began fighting Trump’s immigration ban, the organization landed more than $24 million in donations, more than six times what it’s used to receiving in an entire year.

The creator of the fake page, though, isn’t the only one to poke fun at Conway.

On Friday, a number of New Yorkers held a vigil to remember those who didn’t really die in the Bowling Green Massacre. As the New York Daily News reports, one person held a sign that read “Never remember always forget” as people chanted “We all are Bowling Green, never remember never forget.”

For her part, Conway eventually said she was mistaken about the fake massacre. Luckily for those who are inclined to disagree with her and the president, there are plenty of people who won’t let her forget her mistake.

Editors’ note: An earlier version of this story implied the Bowling Green Massacre Fund was the creation of the ACLU. As of this writing, it’s unclear who owns the domain name.