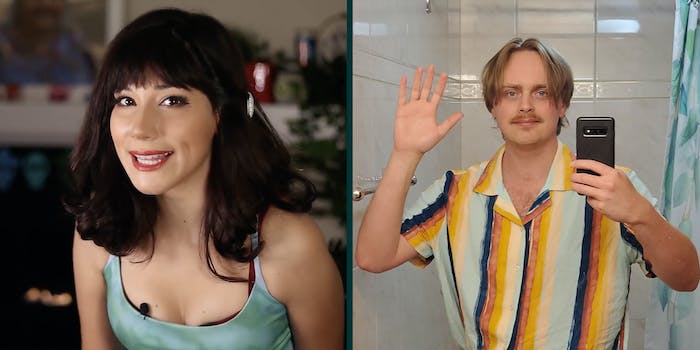 ‘I am not the same person I used to be’: YouTuber Abelina Sabrina describes life-threatening pregnancy, alleged abuse from ex-boyfriend Gus Johnson in viral video

'This thing has changed my life so much'

A viral YouTube video featured YouTuber Abelina Sabrina Rios detailing her traumatic pregnancy. In the video, she expressed the lack of support from an unnamed boyfriend during her ectopic pregnancy, which is when a fertilized egg grows outside of the uterus. It immediately put the focus on fellow YouTube star and former boyfriend, Gus Johnson.

Fans of both Rios and Johnson erupted on social media in support of the former and shock for the latter.

She recalled that though she didn’t have a specific desire to have a child before the troubled pregnancy, she felt pressured by the boyfriend, who had allegedly told her that a child would “ruin” his life.

“It was really scary to receive this conflicting pressure from medical staff and your body to not [have an abortion], and being pressured by your partner to do it,” she said. “It felt like I didn’t even have a choice.”

Rios also talked about how her ectopic pregnancy became so severe that her fallopian tubes ruptured, which she called “the most intense pain I’ve ever felt in my life,” causing life-threatening internal bleeding. The medical professionals did not see the bleeding and pain as an issue initially.

The YouTuber believed she had a significant problem, but her partner did not want to change his work and social plans to come with her to get checked. (More recently, she says the boyfriend was also abusive during complications of rhinoplasty.) She wound up going to the hospital alone, where she finally received the diagnosis. But she said the rupture and complications from the resulting surgery had caused lasting damage. She lost her left fallopian tube and “half my eggs.”

“It sucks because this thing has changed my life so much,” a teary and traumatized Rios explained. “I am not the same person I used to be.”

Later, Rios explained herself as someone who was “broken for a really long time.” However, the boyfriend, presumably Johnson, was unsupportive in her view during her coping with the recent trauma. She claimed he became resentful and said that “someone else would have left you by now.”

The revelations shocked fans of Johnson, who issued an unsatisfactory apology for some where he said “circumstances were extremely hard and complicated for both” parties.

“I fully realize that I did wrong, and wish I could change how I responded and acted during that time. I’ve grown a great deal since that happened, and I wish I knew then what I know now,” Johnson continued.

Rios, however, tweeted: “I won’t accept a misleading apology with lies in it. I don’t forgive you.”

The Daily Dot has reached out to both Gus Johnson and Abelina Sabrina Rios for comment.