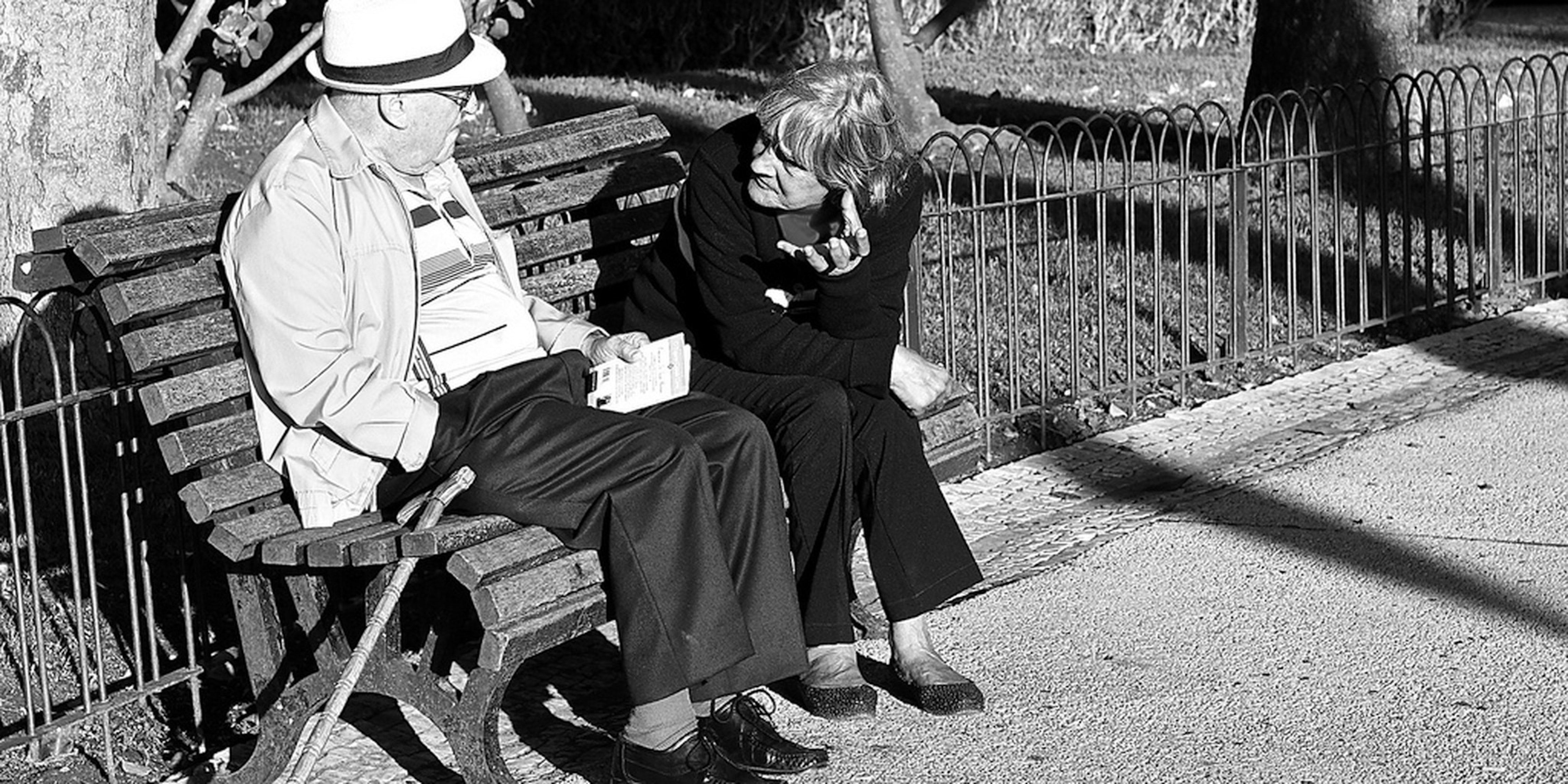 Here's a guide to addressing the issue.

I’m white. Like really white. I’m half Swedish, half Irish, and I have barely enough melanin in my system to be visible in a snowstorm. I was raised by two white parents who warned me about bad neighborhoods and gently advised me against interracial marriage because “it would just be easier that way.” I never even mentioned racism as a child, except to deny its existence when I parroted my parent’s opinions about affirmative action at a public school in a wealthy district that had more lacrosse fields than it had black students.

Like me, many white people grow up in this insular way. According to a Reuters/Ipsos poll, 40 percent of white Americans have exclusively white friends, compared with the 25 percent of non-white Americans who have exclusively non-white friends. In other words, if you’re a white person in the U.S., there’s a strong chance that your friend group looks like the poster for The Big Wedding (and it probably deserves a critical tongue-lashing for its racism, too). My social landscape has changed a lot since I was a child, but I still have a much higher percentage of white friends than my non-white partner.

When you’re mostly surrounded by other white people, it can be hard to talk about racism. You might not know how to bring it up or you might wonder if it is really your place to do so. But in the aftermath of the Michael Brown shooting in Ferguson, we’re fast approaching a watershed moment in our national conversation on race. White people, myself included, need to be listening up to black voices more than ever before.

If, like so many white people, you don’t have black friends in real life, the Internet can provide you with incisive commentary on structural racism and police brutality, whether that commentary comes in the form of Greg Howard’s haunting “America Is Not For Black People” or Ta-Nehisi Coates’ brilliant Atlantic article “The Case for Reparations” or Trudy Hamilton’s reminder that “The Erasure of Black Women as Victims of Police Violence is Unacceptable.”

But in addition to the most important task of listening across race lines, white people also need to be talking with other white people about racism. We can’t just have difficult conversations about race when our non-white friends are around. We all have a lot of deprogramming to do, and it helps to do some of that deprogramming together. We can’t expect people who experience the adverse effects of racism and anti-blackness to have the patience to try to cure us of the very mindset that marginalizes them in the first place. We have to talk about racism because we are the ones who are racist “through the simple act of living as white people.”

This past week, I’ve been talking with a lot of other white people on Twitter about the media representation of Michael Brown and it has been… a challenging experience. By virtue of my skin color, I haven’t, of course, been personally targeted by the intensely racist group of Darren Wilson supporters who have made their ugly presence known both offline and online. Instead, I’ve primarily dealt with deflection and willful misunderstanding from other white people. With these particular dynamics in mind, here are three of my tips to help you talk with other white people about racism.

1) Prepare yourself for defensiveness.

In 2008, video blogger Jay Smooth posted a YouTube video entitled “How to Tell Someone They Sound Racist” to help people learn how to call out racist comments. In the video, he tells viewers to focus on the offending comment itself instead of questioning the character of the individual who made the comment, not because they’re not racist—they probably are—but because it’s too easy for people to disavow responsibility for a racist comment by simply saying, “I’m not a racist!” The person to whom you are talking can quickly make themselves impervious to criticism by reassuring you (and, of course, themselves) that they are fundamentally good.

In a 2011 TEDx Talk, however, Smooth notes that this strategy rarely works: “No matter how clear you try to be in conveying that you’re not attacking the person, when we are receiving that sort of critique we tend to deeply personalize it and take it as a personal attack.” It doesn’t matter how hard you try to keep the focus on the specific comment, white people will still do everything they can to derail the conversation by interpreting your criticism as an attack on their character. Smooth thinks that “framing [the conversation] in “that ‘What You Said’ form is still valuable” as a practice but he’s a lot less optimistic about its impact on your chances of having a successful interaction.

Follow Smooth’s advice but be ready for a wave of defensive energy as soon as you broach the topic.

2) Remind people that racism can be subtle.

On Monday, the front page of the New York Times referred to Michael Brown as “no angel” in what was seen by many to be an attack on Brown’s character. In a country that routinely justifies the deaths of people of color based on racialized notions of criminality, the rhetorical force of calling Brown “no angel” is a potentially lethal one.

But some white people can look at this phrasing and not see the problem. “He robbed a convenience store,” they’ll tell you, even though video evidence suggests he paid. Or they’ll bring up the marijuana in his system, even though white people smoke more marijuana than black people while miraculously managing to avoid jail sentences. You can show them that the media actively demonizes black victims while sympathizing with white suspects and they still might not be able to see it.

That’s because racism can be virtually unrecognizable to white people like me who have grown up under its spell. When you grow up in a culture that’s saturated with representations of black men as criminals, it’s hard not to cling to a subconscious demonization of Michael Brown at all costs. As blogger Rachel Shaodoan put it in her article “I Am Racist, And So Are You”: “Racism isn’t just guys in white robes and Paula Deen shouting racial slurs. Racism is subtle, racism is insidious, and our culture is so deeply steeped in it that it’s impossible to grow up in the U.S. and not be racist.” Racism is not a binary switch that’s either on or off; it’s a constant presence in all of us that’s always at least reverberating at a low hum.

The primary way that another white person will try to avoid conversations about racism is by reducing racism solely to the overt Paula Deen style of racism. The best thing you can do in this situation is to constantly reiterate that racist thoughts, actions, words, and behaviors fall across a broad spectrum of severity. White people will do everything they can to avoid responsibility for being in the middle of that spectrum by pretending that it’s only possible to be on either end. As Jay Smooth puts it, so many people see “any suggestion that you’ve made a mistake” as “a suggestion that you’re a bad person.” Try your best to help your conversation partners understand that racism can be completely banal, and that’s part of what makes it so injurious and so pervasive.

3) Failure is inevitable but necessary.

This is not so much a tip as it is fair warning. In the conversations that I have had with other white people about the representation of Michael Brown, I have not changed anyone’s mind. No one has ever had an epiphany nor have they openly reevaluated their thinking on the subject. The Internet, it seems, is a fairly inhospitable place for these discussions. As Jay Smooth says in his TEDx Talk, “Where I live, on the Internet, the success rate tends to be around ten percent.” Those are some pretty low odds.

So why should white people even bother discussing racism with each other? You might not change hearts and minds, sure, but simply breaking the seal of silence is an important step in and of itself. As White People Challenging Racism notes, “racism is a white problem,” and if we continue to believe that “only the victims of racism can talk about it,” we disavow our role in educating each other and transforming our social world.

As long as white people continue to treat racism like some dirty family secret that can never be discussed openly, racism will continue to operate as an unexamined norm. Racism is the elephant in every room. We need to be talking about it. So, if you’re a white person, the next time your cousin makes a tasteless joke about Michael Brown or your ex-cop brother-in-law tweets his support for Darren Wilson, get those fingers on your keyboard. Your conversation won’t end well but it probably needs to happen anyway.