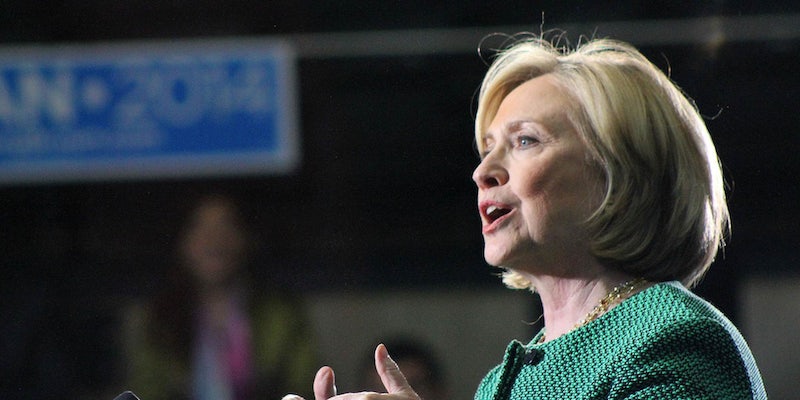 You might be surprised by how political campaigns use your data

Before you pick up your Jeb 2016 iPhone case or your Hillary-branded pantsuit tee, consider this: The candidate of your dreams is picking up valuable demographic data, not just campaign donations, with every purchase. For political campaigns, voter data collected from online campaigns represents a hitherto untapped treasure trove of granular information that can be used to precisely tailor message delivery and voter pushes. Voters, however, might not feel so delighted about this, and they deserve to know the truth about how their information will be used.

Laws surrounding campaign finance in the United States are complicated—and not in favor of voters, generally speaking—but candidates are definitely not allowed to profit from the sale of campaign swag. Instead, voters donate and select a reward—it’s just a coincidence that the donation system looks more like a traditional online store than, say, Kickstarter, with its clearly delineated rewards at different donation levels.

Every time users buy campaign merchandise, they have to submit payment information, including mailing and billing addresses, as well as credit card details. But they have to fork over something else, too, as federal law requires donors large and small to provide information about their occupation, employer, and retirement status.

Individually, any one piece of data might not seem like much—a donor from South Carolina supports Trump, or someone in Arkansas buys a Clinton-branded lapel pin. But these components fit together like pieces of a much larger puzzle to provide extremely revealing information not just about donors, but about larger demographics. Scott Walker beer cozy purchased by a woman in Akron? She probably likes beer or knows someone who does—and she works for a biotech company while paying with Amex, so she’s likely good for repeat donations.

Scott Walker beer cozy purchased by a woman in Akron? She probably likes beer or knows someone who does—and she works for a biotech company while paying with Amex, so she’s likely good for repeat donations.

For campaigns, this kind of detailed data represents a fantastic opportunity. They can customize mailings to various regions, for example. Campaign managers can also make decisions about messaging, how much time to spend where, and how to target valuable ad buys. For instance, the Clinton campaign might find it highly relevant that Oregon voters particularly dislike Mike Huckabee, making a negative Huckabee ad a good sell in the state.

The collection of such data is already a widespread practice in the retail industry, especially online. Retailers collect transactional information in addition to gathering data through cookies, with Amazon in particular collecting a wealth of data for targeted advertising—and targeted pricing. Firms in the real world use data tracking techniques as well; your cell phone may be spying on you in the grocery store, for instance, and your cell carrier could be selling data to traffic surveying firms without your knowledge.

The sale of user and consumer data is the other side of the collection coin, and it’s an extremely profitable one. Even as retailers collect data for their own use, they’re well aware that it’s an extremely valuable commodity. In bankruptcy, for example, RadioShack considered selling millions of customer records, and it’s one among many companies that sell private data to third parties for processing—and profits. Verizon, for instance, sells user data to companies that repackage it for sale elsewhere.

Data brokers, as they’re known, have perfected the art of harvesting, packaging, and using consumer data. They draw upon public records, databases available for purchase, online habits, social media presences, and more to profile both individual consumers and broad demographics. One reason their databases are so detailed is the skillful integration of online and offline data, making them incredibly valuable to marketing firms willing to pay top dollar for their records.

In an expose of the industry in 2014, Craig Timberg at the Washington Post discussed the sheer scope of their practices.

The profiles they produce could affect what products are offered to consumers and how well consumers are treated by customer service, officials said. A ‘financially challenged’ couple, for example, might see ads for subprime loans while their affluent friends are offered premium credit cards and vacation options. Some consumers might face long waits when they call companies with complaints, while others receive speedy, responsive service.

Political campaigns are already relying on the work of data brokers to generate useful databases for outreach campaigns. They rely on a steady supply of leads generated not just within the party—like preexisting donors and people who sign up to express interest—but from outside. That makes databases with detailed contact information and records about voting habits, political leanings, and income level incredibly valuable.

In bankruptcy, RadioShack considered selling millions of customer records, and it’s one among many companies that sell private data to third parties for processing—and profits.

Collecting more information through sales of campaign gear provides yet another opportunity for campaigns to leverage information to increase voter engagement. Pushing for more donors is one element of that engagement, but politicians also want more supporters working in local offices, phonebanking, and volunteering in other ways to get out the vote—and specifically to get out the vote on their behalf.

This allows campaigns to make incredibly calculated decisions. For example, a campaign may gather information that the 20-something baby-having population of Austin really likes Democrats from campaign sales, and it could use a purchased database to determine which socioeconomic classes those young parents fall into. A smart Democratic candidate can use that information to tailor a message to those voters, making them feel like the campaign is talking directly to them.

The collection of personal data on behalf of campaigns also raises an interesting question: Could they turn around and sell that data? Some might consider it proprietary, wanting to keep key facets of their campaign strategy out of the hands of opponents, but it could also represent incredible value on the data market, generating funds for campaign coffers. The legal specifics of such transactions might be extremely challenging to negotiate, but not impossible.

All campaign donations are a matter of public record, for example, and a “third party” firm could offer a bundling service, packaging data from campaigns on the grounds that it’s in the public commons and then reselling it. In turn, such firms could make political donations, thus effectively laundering money from the sale of data. The situation might be ethically questionable and legally nebulous, but it would likely still be defensible in court: There’s nothing illegal—currently—about packaging information in the public domain and selling it to companies that don’t want to harvest and process the data themselves.

This is all part of a very big and important conversation about consumer data, privacy, and how information is used. Many consumers don’t read privacy disclosures or consider their implications, and while they may be unsettled at revelations of privacy breaches, they don’t necessarily think about the information they’re giving away for free to companies that are profiting from it.

“Too much,” says customer service expert Simon Hay to Reuters, “is happening without consumer consent.” His comment reflects a landscape in which consumers are unwittingly providing firms with incredibly valuable data that may be used in unexpected ways and could be breached if it’s stored insecurely, as seen repeatedly over the past year.

There’s nothing illegal—currently—about packaging information in the public domain and selling it to companies that don’t want to harvest and process the data themselves.

In the case of political campaigns, there’s a particular sour note to data collection. While campaigns do have to clearly state that federal law requires them to collect demographic statistics, they aren’t required to provide necessary details about how the data will be used by the campaign. This needs to change, as this is an era in which consumers have a right to plain-language disclosures that allow for greater transparency.

Speaking to the Washington Post, Jeffrey Chester of the Center for Digital Democracy argued, “Consumers need to know what’s behind the screen. Just the warning ‘We collect your data’ doesn’t tell them how it’s being used.” It’s a concern that’s beginning to occupy privacy groups like the Electronic Frontier Foundation, as well as civil rights groups like the ACLU; consumer privacy is a huge 21st century threat.

Scrolling through an endless small-print disclosure and hitting “OK” is par for the course for many when signing up for online shopping accounts, loyalty rewards programs, and more. Firms, along with political campaigns, should be required to provide disclosures with a link to full privacy policies, and the FTC needs to accelerate efforts to protect online consumers—and campaign donors—with simple measures like these.