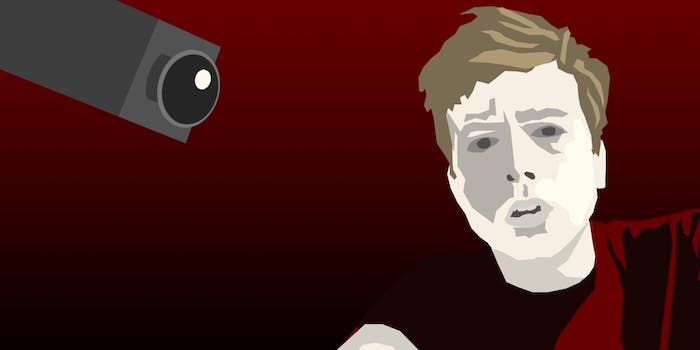 Brown is not a hacker, but he's being charged as one.

Barrett Brown is, per the classical definition, a tragic figure.

The Anonymous associate is in jail, where he’s likely to remain for the foreseeable future, serving as a touchstone—a spokesman less for truth, justice, and the American way than for the dangers of believing a little Web knowledge and a ferocious posture will make you untouchable.

Brown is not a hacker but rather a journalist and information conduit. He first came to major public notice with a campaign called #OpCartel. In October of 2011, Los Zetas, a Mexican drug cartel created by dirty cops from the Mexican Federales and other quasi-military law enforcement groups, allegedly kidnapped Anonymous members.

An apparent spokesman for the hacktivist collective, Brown threatened that most violent of narcoterrorist groups, one which has apparently used hackers to target social media users, with exposure—by hacking their information and publishing the names of law enforcement officials, politicians, journalists, and taxi drivers who were working with the groups.

#OpCartel was by no means a widely embraced campaign, with many inside and outside of Anonymous decrying it for its potential to get innocent people killed. It was eventually dropped after the kidnapped Anonymous member was apparently freed.

Brown’s actions were criticized as self-aggrandizing and reckless by many. But he continued, accusing a North Carolina U.S. district attorney, Asheville’s Ron Moore, of being in league with the cartels. He followed that up by accusing another hacker, Robin Jackson of Montana, of the same thing.

In December 2011, Brown solicited help on Reddit in sifting through over 3 million emails secured by the AntiSec subgroup of Anonymous in a hack of the private security group Stratfor.

Finally, in March of 2012, Brown’s apartment was raided in a large cross-Atlantic arrest of LulzSec hackers, another subgroup Brown was associated with. It was later revealed in the course of these arrests that LulzSec leader Hector Xavier Monsegur, known as “Sabu,” had been acting as an FBI informant. Brown was not arrested at the time.

It wasn’t until six months later, in September, that the FBI apprehended Brown. It happened on camera during a live chat between Brown and a dozen other participants.

As the Daily Dot reported at the time:

“The shirtless and relaxed Brown is sitting in the dark with his girlfriend, teasing an attractive chat member about being a GIF instead of a real person, when he evidently hears something and goes off camera. His girlfriend evidently shut off the webcam, but the audio continued to run, capturing what sounds like a very agitated Brown having a shout-off with officers who react with predictable physicality.”

A few hours previous, Brown had released a video, titled “Why I’m Going to Destroy FBI Agent Robert Smith,” in which he threatened to ruin an FBI agent’s life and “look into his fucking kids”  if he were harassed.

Brown’s tendency to put himself forward as a “spokesman” for the amorphous group irritated many Anonymous hacktivists and their supporters. But his ability to get press was valued. So feelings about him ran hot and cold. With his dramatic arrest, it ran hot, with members posting the video of the arrest, the cleaned-up audio, and a transcript. And then cold, with some asserting he, like Sabu, had been working with the FBI and the arrest had been staged.

In a subsequent letter, Brown alleged his ribs had been broken during the arrest and that he was withdrawing from a heroin substitute, and authorities in the Texas facility where he was held were refusing him medical care.

Brown was indicted in October for threatening the FBI agent in the video. In December, he was indicted on a slew of additional charges relating to the Stratfor hack. Brown was instrumental in communicating the information, which he was not involved in securing, to the whistle-blowing site WikiLeaks. He helped to “allegedly disseminate a link to the hacked information by pasting a link to the documents into an IRC chatroom, and this is the basis for the new charges,” as Daily Dot wrote at the time.

The new indictment included one count of stolen authentication features, one count of access device fraud, and 10 counts of aggravated identity theft.

His trial is scheduled to begin in September. If found guilty on all counts, he could face a century of jail time.

Why is Barrett Brown important? Primarily as a cautionary tale. Quite aside from whether or not he did what he is accused of and whether his actions make him legally guilty under U.S. law, his situation proves you don’t have to be a hacker to be arrested and charged with doing the things hackers do. You don’t have to be a terrorist to be lumped in together with them in the governmental, or public, eye. The appearance of impropriety, as they say, can be enough to redefine you against your will.

Another important thing Brown’s story teaches us is that widely distributed digital partnerships like Anonymous, LulzSec, AntiSec, and others are often thought of in a manner much different than they operate, sometimes even by those involved. Anonymous is not a group like the Boy Scouts, SAG, or the Chicago outfit.

But at times individuals like Brown, who acted as though he spoke for “the group” will be considered its face and indicted (metaphorically as well as literally) for its sins as soon as he is admired for its achievements.

Barrett Brown is important not because he is a simple figure. He is neither a cartoon villain nor a comic book superhero. He’s a person who took real personal chances to bridge the gap from marginal hackers to the newspaper-snapping public but also repeatedly made idiot mistakes, building Babel-high on a tottering but needy ego.

CORRECTION: An earlier version of this story asserted that Brown had threatened to kill an FBI agent. Brown actually clarified his threat with the following statement, made in the same YouTube video:

When I say his life is over, I’m not saying I’m going to kill him, but I am going to ruin his life and look into his fucking kids. Because Aaron Barr did the same thing and he didn’t get raided for it. How do you like them apples?