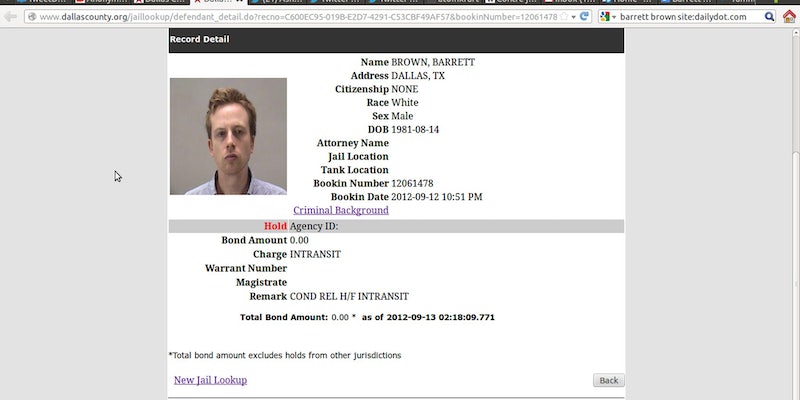 Barrett Brown had posted a video threatening the FBI just a few hours prior to his arrest, caught live on TinyChat.

“Being a crackhead is so 90s. But then again so is @barrettbrownlol‘s paranoia that the men in black are out to get hi- oh wait. They got him.”

Anonymous hacker, commentator, journalist, and fameball Barrett Brown was arrested in a dramatic takedown last night live and on-camera, in the middle of a TinyChat with a dozen others.

The shirtless and relaxed Brown is sitting in the dark with his girlfriend, teasing an attractive chat member about being a GIF instead of a real person, when he evidently hears something and goes off camera. His girlfriend evidently shut off the webcam, but the audio continued to run, capturing what sounds like a very agitated Brown having a shout-off with officers who react with predictable physicality.

“dating @barrettbrownlol is the BIGGEST JIHAD EVER,” tweeted his girlfriend.

A few hours earlier, Brown had posted a YouTube video threatening to knife any FBI agent who bothered him or his mother. “Yup Barret wins the interwebs hands down with that vid. #epic #shuterdownthiscantbetopped,” tweeted an equal parts admiring and derisive observer, before going on to suggest someone turn it into a mashup with kittens.

Anonymous, who both loves Brown’s ability to get them good press and loathes his self-appointed position as unofficial spokesman of Anonymous, quickly went to work. Naturally someone had been recording the whole thing (it’s not clear exactly who at this point) and the video was quickly distributed via Mediafire. “He’d want it this way,” said the uploader. Not long after that, someone else posted a cleaned-up version of the audio, the better to transcribe it. Then, the transcript was uploaded to Pastebin, making this one of the most thoroughly covered arrests in multimedia. Expect a GIF any minute now.

While the Dallas County prisoner lookup initially showed Brown to be in custody, an hour later it returned no results for Brown, Barrett, white male. According to the original report, when booked he gave his country of citizenship as “None.” His mother reportedly says that his arraignment will be in the morning.

Some weren’t worried. “Cool how the FBI staged @BarrettBrownLOL‘s arrest live on cam to bolster the idea he hasn’t been working for them for some time already,” said Methadonna on Twitter, voicing the suspicions of many. “Color me skeptical; too many coincidences. I’m leaning on this being LE [Law Enforcement] theatre,” said Tactical Intelligence.

Watch the video and judge for yourself: