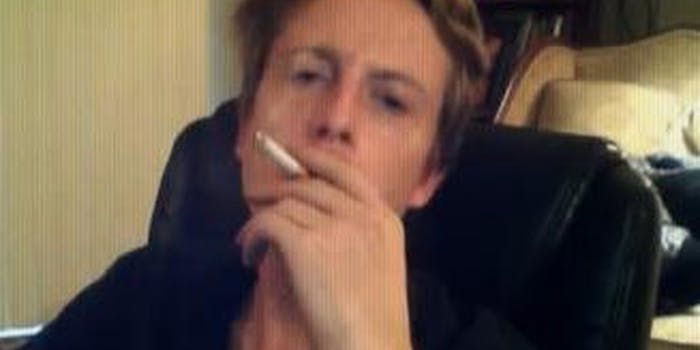 Brown, a journalist, media figure, and established author, has written for the likes of  Vanity Fair, The Guardian, and The Huffington Post and engaged in punditry on various networks, including Fox News.

So how did he get here? And why is a child berating him?

Brown has never really fit into traditional roles and seems to revel in that. For instance, he’s rather fond of posing for both magazines and in public webcam chatrooms under a stuffed bobcat that he says his father shot.

But these days, Brown, baby-faced despite just turning 30, has graduated to something else. Earlier last year he became known as an expert on Anonymous, the shadowy hacktivist collective making headlines since 2008. And in the past month alone, Brown has been the subject of countless media mentions. To say his life has changed is an understatement.

To wit: Brown recently publicly claimed to have jaw-dropping information on “Operation Cartel,” the Anonymous operation against Mexican drug cartels. He said he knew of an Anonymous member who was kidnapped by the drug cartel and then released.  He’s also made charges that the District Attorney in North Carolina is involved with a local gang and also charged that an IT worker in Montana was involved with Los Zetas.

The claims have been reported in countless articles, although no one has been able to verify them. To add more fuel to the fire, Brown recently announced what he says is a six-figure book deal on Anonymous.

Brown evolves from a journalist to an Anon

Brown went from covering Anonymous as a journalist, to briefly appointing himself the face of Anonymous (before quitting in May).  And a couple weeks ago, he began posing as the public figurehead in the collective’s war against Mexico’s drug cartels. This—for a group  that isn’t even an organization, has no head, no membership and disdains self-appointed spokesman.

But is Brown really a spokesman for Anonymous? It’s clear he has worn the Anonymous hat on more than one occasion, but does that qualify him as the face and expert on Anonymous? And more to the point, can anyone really be a spokesman of an organization that professes no leaders and is laden with a trickster culture where truth is sort of a moving target?

Or is he, as some critics maintain, a “poser” who is trolling for fame?

Brown “represents no one but himself, and cons morons into thinking that he is somehow associated with the computer underground due to being in public chatrooms anyone could join,” said Andrew Auernheimer, a federally indicted celebrity hackivist.

Brown has “never done anything of note” and “holds no sway in any community,” said Auernheimer, who is well known in hacker circles as Weev.

“He represents more than an opportunistic attention whore. He is being paid by the media establishment to co-opt Anonymous and make it out to be a joke. Not a hilarious spectacle-ridden joke but a sad shell-of-its-former-comedic-self kind of joke.”

Perhaps that explains the fat kid in the chatroom, who wasn’t just a critic but actually called for Brown’s death.

“I hope [Los Zetas] finds you and kills you!” the kid yelled, referring to the Mexican drug cartel.

Brown left for another chat room, continuing to smoke. Others followed.

He also has avid supporters. And on this night they came to praise him or ask him questions. About 20 people showed up in the chatroom, not a bad showing for Tinychat. (For the most part, Brown was the only one broadcasting, and he talked about anything from OpCartel, to cigarettes, news, and music. His fans usually defer to him.)

The chat then took another turn. He told his audience he needed to leave his apartment for a while because his safety had been compromised.

A hacker called the Jester, and the Jester’s associates, he said, released his personal information, as well as his family’s. Brown repeated this assertion in another phone interview with the Daily Dot and on his Twitter account.

The Jester, a hacker believed to be ex-military, denied these claims in a public blog post almost immediately.

If The Jester didn’t “dox” (release of one’s personal information) Brown, who did? (The Daily Dot is not linking to the information, as it could endanger Brown.)

While the sharing of the Downfall video doesn’t in any way indicate Brown is trolling The Jester, or vice versa, it does lead to some perplexing questions.

Who is trolling whom?

Given Anonymous’ trickster culture, it’s probably safe to assume someone is pranking someone in this scenario. But who is trolling whom?

Did Brown leak his own personal information to generate more media buzz, and finger The Jester? Is Operation Cartel just a fake operation to promote his upcoming book, as The Jester and various media outlets assert?

Presumably Brown would have no good reason to make his personal information available to Los Zetas; This is a drug cartel that has killed bloggers and Facebook-posters.

Why, if Brown was faking the whole thing, would he bother when it could be a matter of life and death? He says the Zetas are out to get him but there’s been no evidence that that is the case. Of course, it’s hard to know if there is enough information to do damage—or if he’s even on the Zeta’s radar.

And it’s nearly impossible to know anything going on in Brown’s head.

Brown’s claims are hard to verify

Petulant and prone to hyperbole, Brown has been described as an American Julian Assange, but his self-disclosed opiate addiction gives him a Hunter S. Thompson vibe.  Throw in a splash of Andy Kaufman, and you’ve got Brown. Or, at least the man he wants to be.

Journalists have been unable to verify Barrett’s assertions.

However, Brown defended them, telling the Daily Dot that he has solid evidence to back up his claims. People trust him more than the CIA, FBI, or the DEA, he said. That’s how he gets his information.

The information on Los Zetas, is “held by Anons in Mexico,” he said, and he doesn’t have access to it yet. And no one can verify the kidnapping victim because the victim will never come forward. “It’s not worth it to make that person more visible, it’s just not going to happen,” he said.

(In a recent development, Anonymous changed its focus from one that targeted Los Zetas to one targeting government officials, dubbing it  “Operation Corrupcion.”)

What is Anonymous anyhow?

And then there’s the fact that Anonymous isn’t like any other organization. Like its name implies, it really is Anonymous, which keeps everyone from federal agents to Scientologists (a target of Anonymous), from knowing who they are.

There’s no spokesperson a journalist can call and ask about claims, for instance, because there is no central place where Anons communicate with each other. Most Anons have no idea what other Anons are doing, and they like it that way.

Anonymous is more like a concept. It’s like a hat people don when they feel like engaging in protest, social justice or vigilantism. Sometimes they’ll put it on just to prank someone.

While a lot of these hat-wearing group activities on the Internet come from the infamous 4chan site and designated Internet Relay Chat rooms, increasingly ideas for group activities come from directives in YouTube videos, Facebook posts and groups, and other mainstream social media sites.

Anonymous is not “some group, or some movement, or some subset of humans,” wrote
Jeffrey “sneak” Paul, a consultant and coder-for-hire who has many friends that “fly the anonymous flag,” in an email to the Daily Dot. “It’s none of those things.”

Anonymous is more like a “flag” that has been “used by many to mean lots of different things,” and “those operating under the Anonymous banner do things which cannot be directly attributed to Anonymous-when-perceived-as-a-group.”

These days, someone could call himself Anonymous just because he retweeted something from an Anonymous Twitter stream.

Members—if you can call them that—come and go through a revolving door. They virtually gather for a specific purpose, and they don’t always stay together after the purpose has been accomplished. People who put on the Anonymous hat don’t wear it for life, or even for every group Internet activity.

Herein lies the trouble with the very public Brown. Aside from not being able to verify, yet, what he knows about his time with Anonymous (or Los Zetas), he has another issue. Anons like to keep a low profile. Their videos are generally uniform and they favor images of Guy Fawkes masks and computerized voices to speak for them.

Brown on the other hand, is hardly low profile. His metaphorical Anonymous hat is gold-gilded and wide-rimmed, with a flamboyant purple plume.

There are few rules among Anonymous, but one unwritten rule mirrors the first rule in Chuck Palahniuk’s Fight Club, a piece of literature and movie popular among Internet citizens. That rule: you don’t talk about Fight Club… and you definitely don’t talk about Anonymous (or /b/, a board on 4chan, known as the originator of Anonymous culture).

And it’s possible that there are some sour grapes among Anons. A few “old-time” Anons with whom this reporter corresponds have expressed interest in writing their own books, or making their own documentaries.

Brown is “clearly not part of this group,”  said Jeffrey “sneak” Paul. Brown is an “an attention-seeking opportunist” and nothing more “than a slimy vendor hawking American flags at Ground Zero.”

One long-time Anon who claimed to have been involved with Wikileaks didn’t know who Brown was until this Daily Dot reporter sent the Anon numerous news articles about him.

Brown, on the other hand, insists he has the qualifications to write about Anonymous.

“I’ve been involved with [Anonymous]  fairly deeply for a while, since the culture came about,” and  “a lot of the information in the book is going to be more valuable than anything written about Anonymous [so far].”

Brown is a strong proponent of civic engagement, saying it is “everyone’s duty in the West to be involved” and to engage in political protest. Brown himself has gone to Occupy Wall Street, and says he is involved with Occupy Austin.

Anons have punished those who write about the group before. For instance, Gawker, where writer Adrian Chen frequently writes about Anonymous, was hacked by the collective last year for “arrogance.”

And Cole Stryker, author of  the first book on Anonymous with the appeasing title “Epic Win for Anonymous: How 4chan’s Army Conquered the Web,” wasn’t exactly hacked. But he was attacked Anonymous-style: he received numerous pizza deliveries following the announcement of his book—as well as death threats and online mockery involving a dating site—pranks that left him unfazed.

Given Anonymous members’ cultural aversion to getting written about, it should come as no surprise that many Anons and hackers would sling smack or even troll Brown over his book tentatively titled Anonymous: Tales From Inside The Accidental Cyberwar.

Brown told Chen at Gawker he received a six-figure signing bonus from Amazon, a publishing choice described by various Anons as a knife in the back.  (Amazon was a company targeted in Operation Payback, an Anonymous operation Brown hinted at being involved with.)

Brown clearly takes it all in stride.

“I don’t follow the rules of the United States, so obviously I don’t give a shit about the rules of Anonymous” he told the Daily Dot.

And that, in fact, is precisely what a good troll would say.