World of Warcraft just got easier for players with color blindness

Blizzard Entertainment has taken another step to serve its diverse playerbase.

Blizzard Entertainment wants to make it easier for World of Warcraft players with color vision impairment to enjoy the game, and an upcoming patch will make it easier than ever.

World of Warcraft patch 6.1 will add an “accessibility interface configuration section” to the UI option tools. WoW depends heavily on use of color to allow players to distinguish between different levels of item rarity and to target specific players during player-versus-player combat, both of which can be very important in fast-paced gameplay. These upcoming changes therefore address fundamental improvements to WoW gameplay. 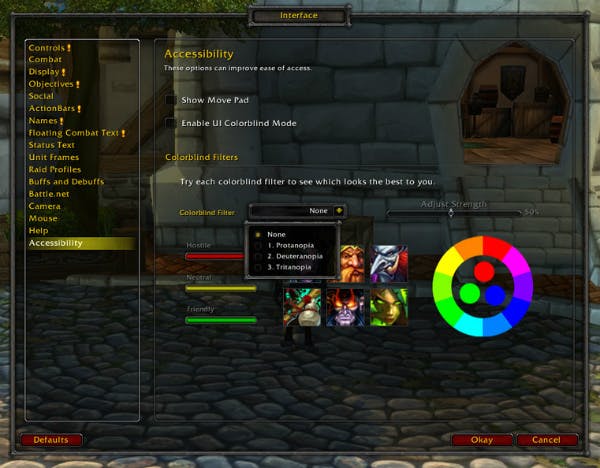 Specific filters for different types of anomalous trichromacy, or color vision impairment will be part of these new UI options settings. Anomalous trichromacy is defined by a reduced ability to distinguish wavelengths of light specific to certain colors. The new UI filters introduced by patch 6.1 will cater to specific, reduced color sensitivities by removing problematic wavelengths of light, and will also include sliders to increase or decrease the filter effects rather than instituting a “one-size-fits-all” approach.