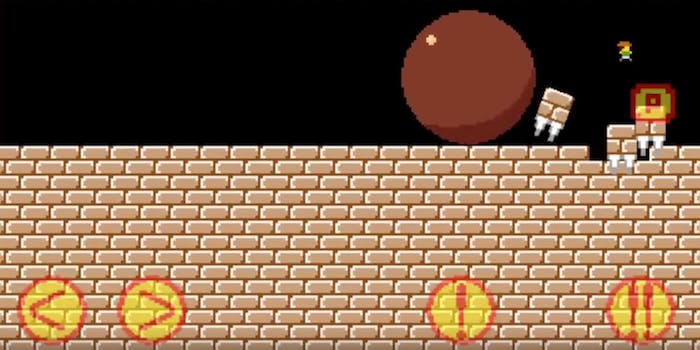 TrapAdventure 2 uses your video game expectations to kill you.

It might look like a standard Mario-style platformer, but the mobile game TrapAdventure 2 wants you dead. Over and over again, this game will cut you down in surprising (and hilarious) ways.

This shouldn’t come as a surprise, really. Developer Hiroyoshi Oshiba put a warning in the game’s App Store description: “Caution!! This may be the most hardest, irritating, frustrating game EVER.”

TrapAdventure 2 came out for iOS in 2016, but it’s been making the rounds on Twitter today after Steve Noah posted a video clip. All that attention has propelled the free-to-download game up the charts in the “Action” category on the App Store.

No idea what this game is called, but whoever made it, is the devil. pic.twitter.com/Ec98aGXSDD

So what is TrapAdventure 2? It looks like a side-scrolling platformer like any other. But once you start playing, you’ll quickly realize it’s more interested in subverting your expectations. In fact, it’s designed to kill you in all sorts of playful and sadistic ways.

Just as you’re about to land on a block, spikes will pop out of it, killing you instantly. Walk down a deserted hallway, and a giant boulder comes rolling at you. Ceilings collapse, fireballs hurtle your direction, and lasers shoot unexpectedly from nowhere.

There’s no way to predict any of these things are going to happen until you experience them and die. But when you restart, you’ll know to change your approach to avoid that particular fate. If you stick with it, you’ll end up dancing your way through the level exactly as the developer intended. Talk about trial by fire.

TrapAdventure 2 is free to download for iPhone or iPad. But unless you spend a dollar on the “Normal Mode” in-app purchase, it’s even crueler. You have to watch a commercial each time you make an attempt, and it locks you out for an increasing number of minutes each time you lose all of your lives.

But for a buck, it’s a fun game that plays similarly to other hard-as-nails platformers like 1001 Spikes and Cloudberry Kingdom. Try it for free if you’d like. Otherwise, here’s a spoiler-filled video of someone beating the whole game in 12 minutes.