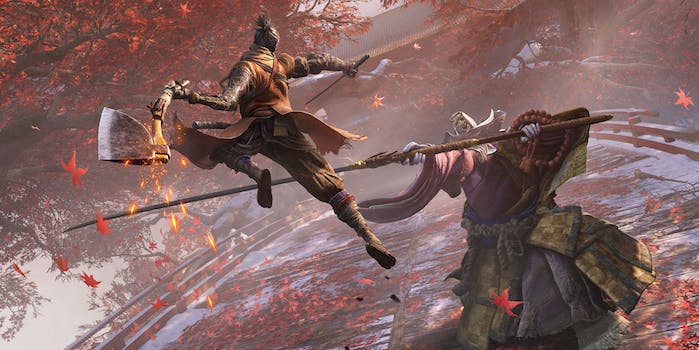 The big, the brutal, and the bonkers.

Shadows may die twice in Sekiro: Shadows Die Twice, but you’ll undoubtedly squirm and curse and repent to gods old and new after your 30th perishing. Of course, it’s to be expected from FromSoftware, a developer known for the painfully epic and punishing gameplay in Dark Souls and Bloodborne, and Sekiro is no exception. We have incredible bosses to thank for these tortured memories, and Sekiro capitalizes on its brand of sword-clanging with enemies both terrifyingly immense and subtly lethal. There’s a lot of them, though, so we’re here to suffer (for science) and show you the top 10 Sekiro bosses.

There’s plenty of debate on which bosses are the easiest or hardest to defeat, but we’ll leave that to bigger masochists than us to argue. We’ve ranked each boss instead on their uniqueness and how interesting a challenge they provide players.

“MY NAME IS GYOUBU MASATAKA ONIWA!!” With a thundering roar, the horse rider from hell reminds you that Sekiro is a game about badass Samurai and ninjas clashing swords until someone becomes a human blood geyser. Gyoubu is far from the hardest fight in Sekiro, even if you’re butting heads with a lower health level and fewer healing drinks, but the pure theatrics of seeing him stomp around a battlefield littered with corpses and breaking wooden barriers is pure joy. FromSoftware also does a remarkable job of implementing Sekiro’s grappling hook into the fight, allowing you to leap into Gyoubu’s face with aerial flare. That lets players who are still learning the ropes feel like a proper shinobi. In truth, maybe I just love him because he’s basically the Bakugo of the Sekiro universe.

The Armored Warrior is a perfect example of a solid boss with a unique gimmick and, if you look/think about it, a compelling backstory. Guarding the only bridge towards the Senpou Temple, the Armored Warrior utters a warning to lay down your sword for the sake of his son. A FromSoftware boss who isn’t some hedonistic monstrosity or corrupted humanoid is already engaging. Most players will learn pretty quickly that there’s no way to outright kill the Armored Warrior short of turning his invulnerability back on him, making for one of the game’s best emergent moments as Sekiro pushes him off the bridge, causing him to shout “Robert!” and land with a deafening thud. Lore fanatics will notice that the “Robert” of the Robert’s Firecrackers upgrade for Sekiro’s prosthetic arm is undoubtedly the Armored Warrior’s son. The two had likely sailed from southern Europe seeking to stave off a deathly illness, and here you are, mucking it all up. A tiny but meaningful tale makes this boss battle very memorable.

What an absolute unit indeed. When you’re first walking up that Ashina Castle gate path, you hear some heavy thudding, which made me wary of what lay ahead, only to realize that it was just a normal troll hammering at the ground. Then you get past all that, not a care in the world, and suddenly a 7,000-pound bull is crushing everything around you, including enemy soldiers. While other Sekiro bosses, even the most difficult ones, give you a moment to collect yourself, Blazing Bull has no chill.

I have a personal affection for the late O’Rin. Not only is she the culmination of the weird but fun quest with Jinzaemon, the black Samurai, but she’s incredibly evocative of classic Japanese horror. Maybe it’s the way she plays her shamisen in the middle of a graveyard, luring men in with her charm. Maybe it’s the way she pines for a long lost lord and can’t be argued against it. For me, it’s probably the tortuously slow pace she walks towards you at the beginning of your fight, sword stretched down toward the dirt, as if to say, “This is where you’ll go when we’re finished.” Then she teleports from across the field and slashes your brains open. Not so subtle a seductress after all.

That poor old sculptor. The man who’s been saving you since the beginning of the game warned you all along that this was coming. Seeing him on the battlefield where you previously cut down Gyoubu is intimidating, but things only really become terrifying when you realize how far-reaching and deadly his various flame attacks are. We’ve got to dock some points for the fact that you’ll be slashing at his ass or crotch for a big chunk of the fight, but thankfully, so much of his fight is laced with big flashy area attacks that it’s forgivable.

The mysterious and elderly Lady Butterfly is likely a player’s first time realizing that not everything is as it seems in Sekiro. Lady Butterfly channels the absolute best of classic action movie and anime ninja tropes, utilizing invisible razor wires to flit about the burning hidden temple and using some sneaky ninjutsu techniques to fool the player into fighting an illusion of herself. Lady Butterfly, like some mini-bosses before and long after her, also acts as a really challenging “midterm” test that pushes you to throw away the bad habits you learned in Dark Souls or Bloodborne. She’s a mean old bat, and she’s not letting the shinobi away without proving his mettle.

By most measures, the Divine Dragon fight is remarkably easy compared to everything that’s come before it. The first phase is actually somewhat dull as you run around whacking the old rotted dragon totems that barely fight back. It’s almost a disappointment. Then Mr. Dragon comes out, missing his left arm (I’m noticing a theme here), but wielding a 100-yard, glowing green sword in its right. Go figure that a god of nature could turn wind into a blade. It’s everything a (somewhat) final clash between a man and a god should be, with Sekiro flying through the air and whipping lightning back at his enemy. That it all ends with a single dragon’s tear is touching, if a little gruesome.

Unless I’m dramatically mistaken, the Great Serpent is physically the largest boss ever in a FromSoftware game, and it damn well shows. Unlike most bosses who get a minor amount of introduction before the fight begins, players are treated to a lengthy stealth sequence that very clearly communicates that Sekiro will absolutely not stand a chance against something this imposing and god-like. At least twice, the Serpent instills fear in players by inching close enough to ruffle the grass you’re hiding in, and any moment it directly targets you is a do-or-die moment of reflexes, such as when you dive into a cave, just barely escaping its mouth.

Though the final confrontation is relatively linear, creeping beneath the rocks, past the Serpent’s body, and later leaping through the air to stab its face in half is all intense as hell. That it ends in a fantastically animated death sequence, leaving you bathed in blood, is just a perfect cherry on top.

The Guardian Ape is, in his own right, a really well-made boss in Sekiro. Frantic animation brings him to life in a way larger FromSoftware bosses rarely achieved before. Watching him swing around and bawl like a toddler on his back, bashing trees out of his way, is terrifying and impressive at the same time. Then he throws his poop at you, or crop dusts your face for a nearly lethal poison attack. The big monkey might be raging, but he at least has a sense of humor, and that makes him arguably the best “large” boss in Sekiro. On top of all that, FromSoftware has the guts to bring him back from the dead 10 seconds after you’ve supposedly killed him for good, leading to these great (and gruesome) reactions:

Though his grandson may have been first to go Super Saiyan on us, it’s old man Isshin who really goes Super Saiyan God Super Saiyan (not a typo, thank you). In a game filled with demons, dragons, and monkeys with swords, Isshin pulls off Sekiro’s most metal move and emerges literally from the slashed throat of his dying grandson, reborn in his younger body for one last duel. It’s not enough that he commands lightning strikes. He does it while wielding a sword, a nine-foot spear, and a gun. As much as Sekiro leans into more human-sized bosses, none of the theatrics of larger bosses is lost here, and that makes one of the most memorable bouts of the entire experience.