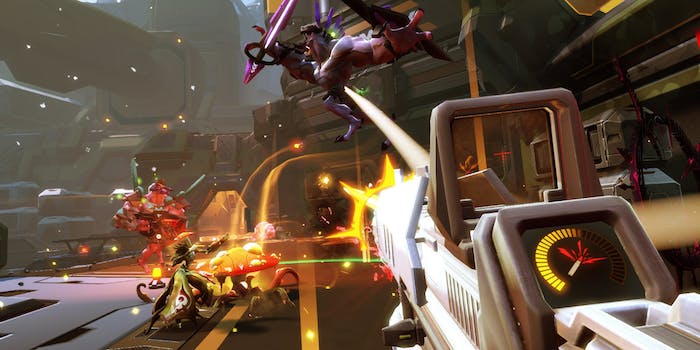 Our E3 demo had nothing whatsoever to do with multiplayer online battle arenas.

When we got our hands on the single-player campaign mode of Battleborn, the new shooter in development at Gearbox Software, the press narrative about Battleborn came crashing down. Battleborn ain’t a MOBA.

Gearbox specializes in first-person shooters and genre mash-ups. The World War II shooter Brothers In Arms mashed up FPS games with real-time strategy games. The Borderlands series mashed up FPS games with role-playing games. When Battleborn was revealed, a game with lots of characters and multiplayer modes like Incursion and Meltdown that sound just like multiplayer online battle arena matches in League of Legends, the “MOBA mash-up” label stuck.

It didn’t help that Gearbox referred to Battleborn as a “hero shooter.” Blizzard Entertainment labeled Heroes of the Storm a “hero brawler,” and the game was clearly a take on MOBAs. Gearbox readily shared stories about how it drew from MOBAs among other genres when designing Battleborn.

Gamers and the gaming press helped encourage this understanding of Battleborn, as well. Genre assignments for new games, especially those that feature little solid information when revealed, is part of how gamers understand what they may be getting into. 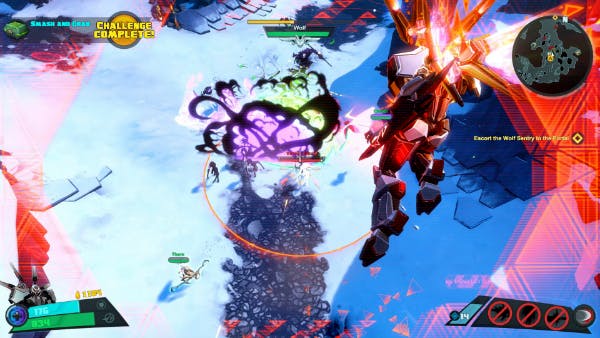 Yet our E3 demo of Battleborn bore zero resemblance to a MOBA. It was a five-player co-op mission with 10 characters to choose from, all of whom had varied ability sets and preferred combat ranges. The demo level had a set of traditional FPS mission objects, standard fare like destroying hostile targets or escorting friendlies. The demo felt like Borderlands from the UI to the nihilistic humor of the writing to the enemy designs and animations.

The resemblance was so uncanny that we might have thought Battleborn was fresh content laid over the skeleton of the systems and design of Borderlands, with a simplified leveling system that made it easier to upgrade our character no less than five times while barely missing any action. And the demo was a hell of a lot of fun.

After the demo we spoke with Aaron Thibault, VP of product development at Gearbox and Brian Martel, co-founder and chief creative officer at Gearbox about the demo, the creative influences on Battleborn, and just how wrong it is to try and boil the game down as a MOBA.

To be fair, Gearbox tried to tell us this almost a year ago. The following is an edited transcript of our conversation. 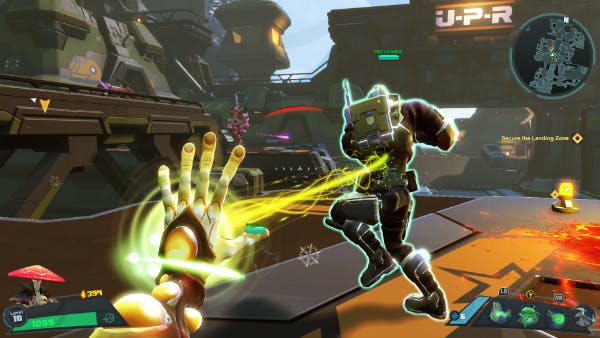 Do you have a scaffolding built from Borderlands that you used as the basis for Battleborn? The Borderlands DNA is sprayed all over that demo.

Brian Martel: The creature team directly went into doing a lot of the characters and enemies and things like that on Battleborn.

Aaron Thibault: We have a data-driven input system called Construct that we’ve built into Unreal that enables us to give a lot of power to designers and content creators and reflects in the variety and level of cool that you see—that comes straight from the designers on the project.

Martel: [Scott Kester], he’s the art director on the game, but he was a big concept artist that helped create a lot of the characters of Borderlands, and so you’re probably seeing closer to what he actually does, is his innate art style, and then spreading that through to the rest of the team and getting that to come through. All of that, in a way that the textures are done and all those things, are pretty much more like that than they are like Borderlands. But they definitely sit in a family of comparatives..

The first time that you heard the word MOBA attached to Battleborn, what did you think? How did you react?

Thibault: I think it’s kind of understandable, in that we have a lot of characters, and we do have competitive [modes]. Of course we also have campaign, we have several different competitive modes. We have people on the team who love playing MOBAs. There are some aspects of [Battleborn] that I can understand why it would feel that way. We have procession leveling, and we do have a mode that’s not too far off [from a MOBA], but it’s not the same. I think people just, they’re looking for the easiest thing to grasp onto, so it’s understandable from my perspective.

We kind of treat it like playing with your toy box … you just mix and match whatever toys you happen to have.

Martel: I think it’s more of a genre blend. It definitely has some DNA from [MOBAs], but I think it also has the kind of DNA from a Street Fighter type of game, it really has that, I mean even looking at the UI, and how we’re bringing characters as it gets into the PvP, or the competitive, it feels like when those guys are coming together that it feels like that moment is from Street Fighter when you have a match happening.

It’s like anything else with Gearbox. We’re curating the kinds of genre blend that we want to do, and make it it’s own thing. We call it at home a “hero shooter.” We kind of treat it like playing with your toy box, your toys coming together, you just mix and match whatever toys you happen to have.

Do you sit down and say “We want to mash shooters up with this genre?” Is that an intention from the word go? What are we going to mash up with shooters?

Martel: I think it’s more like that, more, “How are we going to make this interesting and cool and how are we going to have fun making it for multiple years?” When you’re making a game like this, it can’t be just that simple…

Thibault: We’re just gonna mash things up, and see how it does.

Martel: You dig into it, you see what’s fun, you start testing it, play it daily, and once you get it to that point where you’re loving it, then it starts to create … it’s a weird thing, games kind of almost have a life of their own, and they start to twist turn, and the team kind of puts what they need into it, and it becomes this other thing. And that’s true of when we were doing even Brothers In Arms to Borderlands.

So it’s not a matter of “That’s a design priority, that mash-up,” that goes into the early spec documents, “We want to have aspects of this, which are clearly drawn from MOBAs, and mesh that into our first person scaffolding.”

Thibault: I think in this case, coming out of Borderlands, we knew that we wanted to do a game in which we could focus heavily on where we felt our strengths were, and where we wanted to be creative, and that creativity and happiness actually are two of our pillars, to go and do things we’re excited to do. Well, we love making characters.

We wanted a game in which we could have this big palate for characters. Those discussions led to, well we also really like making story and making a campaign that you can play solo or co-op, so what kind of game would lend itself well to that, with a lot of characters? And we hadn’t gone deep into competitive multiplayer in a while, and we wanted to do that in a way that’s really supported as a first class part of the game.

Battleborn will have three different competitive modes. Thinking about what those modes would be, having that many characters, we were thinking “OK, let’s start thinking about what are some mash-ups that we can come up with, that support really interesting, fun different kinds of playstyles.”

Martel: I think the other thing we knew, that people who had played Borderlands, not everyone finished leveling up a character all the way through. And that’s sort of a travesty, right, because it’s really kind of fun to be able to do that. And that part of being able to do that with our characters, get them in one session all the way through a certain number of levels, and then per character doing that over a series of missions and all that, is really exciting. 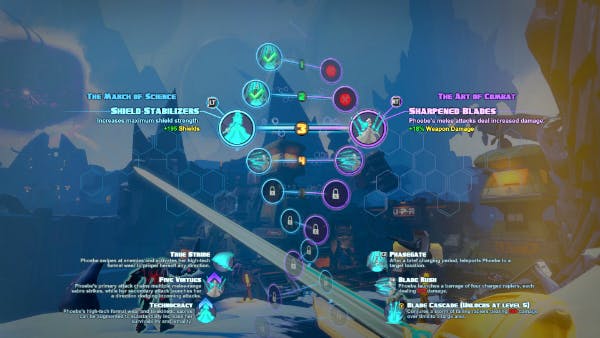 Martel: If you look at the Borderlands skill tree, it’s sort of a simplistic version.

Are you going to be adding more characters to the game over time?

Thibault: Even in Borderlands, as much DLC as we’ve made for Borderlands, we didn’t, we never were making a Borderlands game thinking, “Oh, we’re gonna make all this DLC later.” Even though it lends itself really well to DLC. It was more focusing on the core experience first, and then seeing what players responded to, and what they asked for, later. If we do end up making more characters, it’s because people are asking for it.

That question is drawn from questioning the MOBA identity, as adding more characters is part of what defines a MOBA.

The campaign I tried, the story mode, are those enemies in lanes? Are they on paths?

Thibault: No, they’re not. The story map that you just played, it had, you probably noticed it had a lot of different variety of what you were doing as you were approaching these enemies, none of them…I’m not sure exactly what you’re asking…

[Scott Pytlik, senior public relations manager at 2K Games interrupts to clarify that I’m asking about the way creeps in MOBAs use pre-set paths, or “lanes,” during the game.]

Thibault: It’s not built for that.

I’m asking because I didn’t think so, when I was playing the story mission at the booth, I thought, “This isn’t a MOBA. That’s completely unfair.” It’s this narrative that the press (including myself) has gone with… I mean there is multiplayer, but isn’t the story mode the core experience this kind of co-op mode?

Pytlik:  We could have consciously went out and said “We’re not a MOBA,” but it’s easier and a lot more effective for guys like you to go play it, experience it, and then go back and write about what you think it actually is.

Martel: It’s all about show, not tell.

Is that frustrating, then? In the early stage, for people to be identifying Battleborn as something it’s not, but you have to wait until people have played the game, to discover that misidentification for themselves?

Martel: The general jist of it is, we take inspiration from everything. Borderlands was Halo, I was playing a bunch of Halo and Diablo. And like, wouldn’t it be cool if Brothers In Arms was real-time strategy games and first-person shooters. Battleborn is everything we love about the game industry as a whole, and entertainment as a whole, pulling not just from fighting games, first-person shooters, role-playing games, real-time strategy games, MOBAs, but comic books, movies, cartoons.