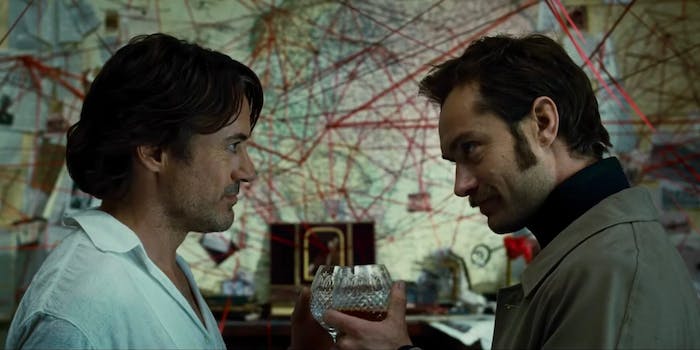 It's coming sooner than you think.

Watson and Holmes are reuniting once again on the big screen.

Warner Bros. announced Monday that Sherlock Holmes 3, the long-awaited sequel to 2011’s Sherlock Holmes: A Game of Shadows, will be released on Dec. 25, 2020. Robert Downey Jr. and Jude Law, who played Sherlock Holmes and John Watson in the first two installments, will reprise their roles. No other cast members have been announced.

It’s unclear if director Guy Ritchie will return to the franchise to direct Sherlock Holmes 3, but Narcos co-creator Chris Brancato is tapped to write the screenplay.

Little is known what Sherlock Holmes 3 will be about (or which Sherlock Holmes stories it might be inspired by). A Game of Shadows ended with Watson realizing that Holmes might still be alive and the revelation that Holmes did fake his own death, so the possibilities of where the story might go are endless.

The potential of a third Sherlock Holmes movie has been bubbling for years. Last year, Ritchie said, “We’ll wait and see” about a sequel to his 2011 movie while Downey Jr. told Entertainment Weekly back in March that “another Sherlock Holmes” was among the projects on his plate after he was done playing Iron Man.

Although there wasn’t a reason stated for why it took so long for Warner Bros. to reveal a release date for Sherlock Holmes 3, the schedule of its stars could have potentially been a factor. Downey Jr. has starred and appeared in several Marvel movies since 2011 while Law has major roles in the Fantastic Beasts franchise and Captain Marvel.