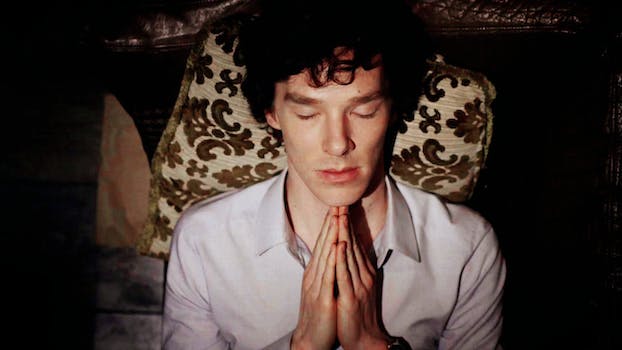 Do these tweets tell us which Arthur Conan Doyle story inspired the latest episode of 'Sherlock'?

While fans have been trying to spy on the Sherlock set for spoiler clues, the next episode’s creators were tweeting out hints for free.

Writer Mark Gatiss and director Douglas Mackinnon have been tweeting from Sherlock‘s semi-secret filming location all week, usually without giving much away. A typical Mark Gatiss Twitter photo, for example, consists of an uninformative blur. Basically, he’s trolling us all.

However, Gatiss and Mackinnon have just tweeted some classic Sherlock Holmes story quotes that may give us a real hint about the upcoming episode.

"It was a bitter night, so we drew on our ulsters and wrapped cravats about our throats…"c/o ace @drmuig! #Sherlock pic.twitter.com/zqjuwlAcoi

These two quotes are from The Adventure of the Blue Carbuncle, an early Holmes story about a jewel theft. Could this year’s Christmas special be some kind of adaptation?

Right now, Sherlock fans are probably perusing the short story for clues, although they’re unlikely to have much luck. If previous episodes are anything to go by, any similarities will be in the form of vague references and Easter eggs, not entire storylines. Sherlock tends to take a lot of liberties with its original inspiration, often to the extent of being unrecognizable.

Plus, The Adventure of the Blue Carbuncle involves someone hiding a priceless jewel by feeding it to a goose, and that doesn’t sound like a suitably dramatic conclusion for an episode of Sherlock—even if it is a lighthearted holiday special.