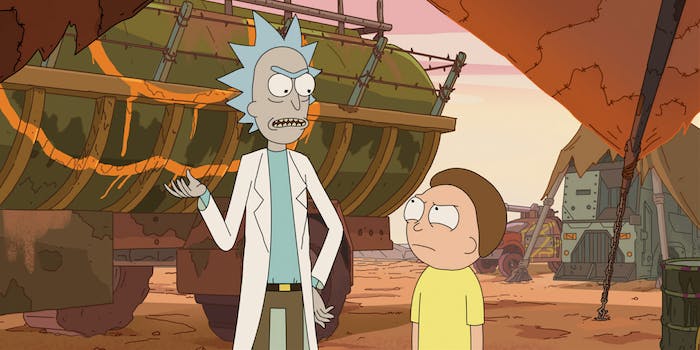 After months of speculation, we now know that more Rick and Morty is heading toward our multiverse—a lot more.

Creators Dan Harmon and Justin Roiland announced Rick and Morty’s 70-episode pickup on social media Thursday, opting for two different approaches. The first arrived courtesy of Harmon’s Instagram, which featured both Harmon and Roiland in the shower together as Roiland said he had to leave so he could get back to work.

Nothing this big has ever been seen in my shower

Soon after, Roiland posted two drawings to Instagram, one which had the date and “Rick and Morty 70 More Episodes” written at the top of the page. Rick was enthused at the idea of more adventures, but Morty… not so much.

So tired of living in Harmon’s shower. Now I can finally move back to my own place and we can finally get back to work. #showerlife #danharmon #rickandmorty #adultswim

While the idea of more Rick and Morty has always been discussed, looking at the future in terms of an episode count is new for fans. But if there was any confusion about what had just happened, Adult Swim soon confirmed the news with a press release stating that it “made a long-term overall deal with the creators that will include 70 new episodes of the critically acclaimed series.”

It’s evident that we’re getting Rick and Morty season 4, but we’re also guaranteed many more seasons after that.

What does this mean as far as a season count?

Because of how Adult Swim’s renewal was announced, it’s unclear just how many more seasons of Rick and Morty we’ll see. It’s safe to say several.

Looking back at previous seasons, Rick and Morty episode counts have been fairly consistent, around 10 or 11 episodes. Rick and Morty has aired 31 full episodes to date. Harmon said that he wanted to do longer seasons—and at one point aimed to do 14 episodes for season 3—but so far that hadn’t panned out. With a long-term deal now signed, that could change.

The 10 to 14 episode mark would place Rick and Morty in line with other adult animated comedies like Archer (with anywhere from eight to 13-episode seasons), BoJack Horseman (12-episode seasons plus a Christmas special), and later seasons of South Park (10-episode seasons), giving us at least a few more seasons to look forward to.

So when can we expect more episodes?

Your guess is as good as mine, but both Harmon and Roiland are aware of how much fans are looking forward to more Rick and Morty. They both witnessed fans asking for updates prior to season 3 and even as contract negotiations over Rick and Morty’s future delayed its inevitable renewal; Roiland even noted it when he shared his “70 More Episodes” drawing on Twitter.

“We haven’t sat down yet,” Harmon told GQ after news of the renewal broke. “We need coffee brewed at the office. That’s the new reason. But that’s a reason that can get tackled now, instead of ‘I can’t talk to you about it’ or ‘I don’t know if it’s ever gonna happen’ and ‘I can’t even think about it or I’ll go insane.’ Now the reason can be ‘Oh, because it’s Thursday. It’s after 6 p.m.’ From now on, the reason that I’m not writing the show will be because I’m done writing it for the day and I’m having fun.”

For Rick and Morty fans, not much has changed. We’re not getting more Rick and Morty any time soon, and we’ll have to wait a long time before we get another substantial update from Roiland and Harmon. But knowing that we’ll get to go on more adventures with Rick and Morty is a victory in and of itself.