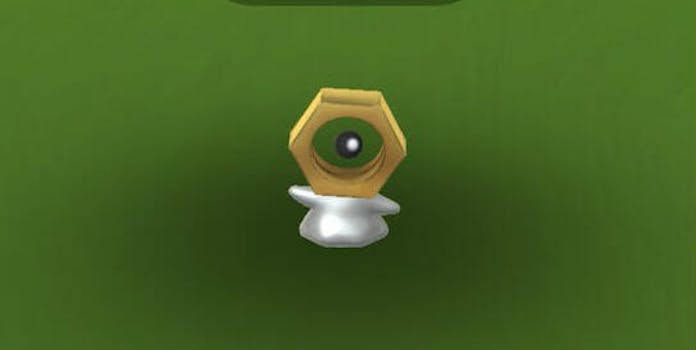 The leaked data lists the little guy as 'Pokemon 891.'

As of its seventh generation, Pokémon currently has 807 creatures, but fans have recently discovered a new Pokémon that may not have been meant for public appreciation just yet. Even weirder, its internal game files in Pokémon Go list it as Pokémon 891.

Twitter user Chrales seems to be the first person to have discovered the new creature. Chrales noted that its listed as a Kecleon, which is an entirely different, gecko-like Pokémon.

Chrales managed to snap some screenshots of the new Pokémon, which resembles a metal nut.

The Pokémon first appeared in the Asia Pacific region after the conclusion of Chikorita Community Day. After Chikorita spawns finished for the day, players began noticing the mysterious creature spawning as “nearby,” only to turn into a Kecleon or Ditto when players tried to capture it. No one has seemingly been able to get the Pokémon to register as “seen” or captured on their Pokedex.

Following that, Pokémon 981 started spawning in every remaining region, including Europe, the Middle East, Africa, India, North America, South America, and Greenland. Players were able to find the Pokémon for about 30 minutes before it stopped spawning, according to IGN.

Some players have theorized that the new Pokémon is a cross between Ditto and Kecleon, especially considering it turns into one or the other upon interaction.

So what the heck is it? Well, considering both Niantec’s global marketing lead and global community manager tweeted about it, it seems like the initial appearances weren’t an accident. Odds are this new Pokémon is one of dozens that will be released for the next core game. The Pokémon Company also recently teased that a never-before-seen Pokémon would be available to transfer from Pokémon Go to Let’s Go, Pikachu and Let’s Go, Eevee. Our bet is on this little guy being that special trade.

Pokémon Go fans have been quick to share their incredulous reactions to new Pokémon.

Help me @trnrtips My Game glitched out while in AR+ Mode and gave me a EXTREME CLOSE UP of the Squishy boy #pokemongo pic.twitter.com/U7zFR3kfpW

I have the theory that the new pokémon is the cell form of Arceus. Small size, similar colors and there are a lot of these in Pokémon GO now. Also, everybody knows Arceus need a new and even more powerful form, an Arceus 100%. pic.twitter.com/DFvNhWff63

????
Hope we will know more about this guy soon in #PokemonGO pic.twitter.com/E8VmWFHOba

Also, make sure to check out how this 70-year-old man plays Pokémon Go with 11 smartphones.