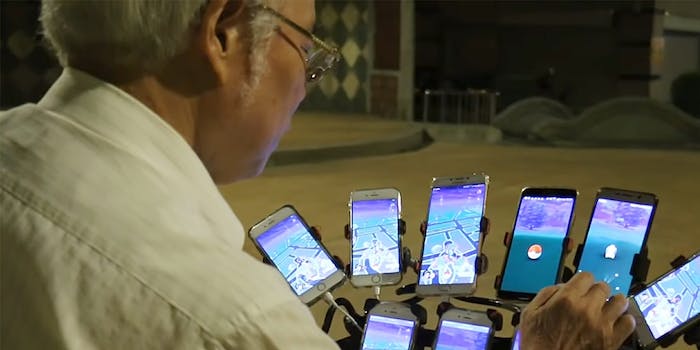 He can play for hours at a time.

For many of its players, the allure and charm of Pokémon Go wore off soon after its initial release, but others are even more invested as time goes on with one Taiwanese man using as many as 11 smartphones to play the game on his own.

Chen San-yuan, a 70-year-old feng shui master, has a rig set up where he can plug in nine smartphones at once and latch it onto a bike. Each smartphone is attached to a portable charger, some of which hold charges up to 20 hours. He’s gone viral in recent months as passersby spotted him playing Pokémon Go, something he wasn’t aware of until others told him about it. (He got into Pokémon Go after his grandson introduced him to the game.)

He explained his methods to EXP.GG, noting that while he has nine phones currently set up, he was playing Pokémon Go on 12 smartphones; he doesn’t add phones to his bicycle until his player is at least on level 30. But that sort of commitment doesn’t come cheap. Chen says he spends “about ten thousand per month,” but the Daily Mail puts his current spending at £1,165 a month.

A more recent video shows Chen with 11 smartphones attached with plans to increase that number to 15 smartphones.

“I can connect with people, prevent Alzheimer’s disease,” Chen said in response to why he liked playing Pokémon Go so much.