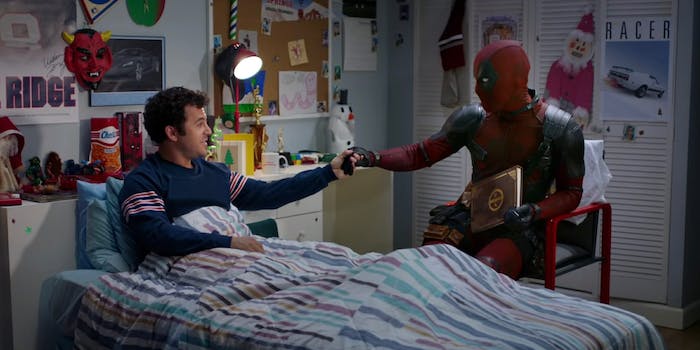 Don't you dare insult Nickelback in front of Deadpool.

As long as we’ve known Deadpool on the big screen, he’s reliably made fun of everyone and everything. But now we know of at least one entity that even he won’t go after.

The marketing campaign for Once Upon a Deadpool—a PG-13 version of Deadpool 2—has largely focused on the viral-friendly premise of Deadpool holding an adult Fred Savage hostage in the bedroom from The Princess Bride as they insult one another. The newest ad, which star Ryan Reynolds posted on YouTube Monday morning, follows a similar format: Savage gives Deadpool crap for being “Marvel Licensed by Fox” and goes as far to compare the distinction to if the Beatles were produced by Nickelback.

Nickelback as a punching bag? It’s almost too easy. Except that the Merc with a Mouth (and fellow Canadian) wouldn’t take the low-hanging fruit. Instead, he launched into a passionate defense of the band that ended with some classic belting. Even Deadpool can surprise us sometimes.

Nickelback, for its part, quickly started to play along.

It’s not like @VancityReynolds to say sorry, we’ve been waiting on a different @deadpoolmovie story……. #MaximumEffort pic.twitter.com/Cb86Mewo22

Once Upon a Deadpool arrives in theaters Dec. 12.