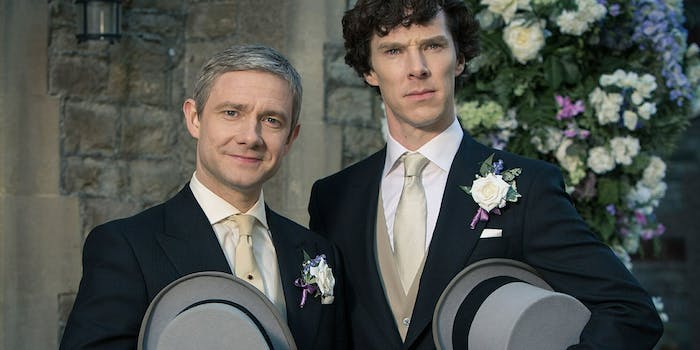 He's had it with 'Sherlock' fans.

Speaking to the Telegraph on Friday, Freeman said there weren’t any plans for a fifth season. He hasn’t ruled out the idea of returning in the future, but for now, he isn’t enthusiastic. That’s partly “due to the reception” from fans—especially those who had certain expectations for season 4.

“To be absolutely honest, it [was] kind of impossible… Being in that show, it is a mini-Beatles thing. People’s expectations, some of it’s not fun anymore. It’s not a thing to be enjoyed, it’s a thing of: ‘You better f—ing do this, otherwise, you’re a c—.’ That’s not fun anymore.”

Sherlock gained a massive following very fast, and while Freeman is known for being curmudgeonly, his Beatlemania comparison is apt. Sherlock fans frequently showed up on the set, and the show’s puzzling plotlines encouraged elaborate fan theories. After a while, those fan theories began to look more like conspiracy theories.

Sherlock inspired a famously enthusiastic shipping fandom, building on the existing fandom for Holmes and Watson. Most fans were happy to write fanfic and discuss the characters in peace, but a vocal minority believed that John and Sherlock would become a couple in the show. This differed from typical fan discussions about subtext (or campaigns for queer representation) because these fans thought the show was full of intentional clues, pointing toward an “endgame” confirmation of John and Sherlock’s romance. By season 4, they were genuinely surprised that John and Sherlock weren’t together. There were even rumors of a secret final episode hidden under a different name on the BBC schedule, resolving the story to Johnlock shippers’ satisfaction.

Freeman directly addressed the fans who thought John and Sherlock would end up together. “Me and Ben, we have literally never, never played a moment like lovers. We ain’t f***ing lovers.”

This will not come as a surprise to most Sherlock fans. While some shippers hope their favorite pairing will become canon (Mulder/Scully), others enjoy a ship as a purely fan-created phenomenon (Kirk/Spock). The latter is especially true for same-sex pairings, and most fans knew that John/Sherlock would never happen on-screen. That’s the crux of the issue here. Freeman and Cumberbatch may have “never played a moment like lovers,” but their intentions are irrelevant to the end result. In the show itself, there’s plenty of material to interpret as romantic subtext. The problems came when fans read that subtext as intentional clues, encouraged by the show’s puzzle-solving nature. It’s a tangled web of fannish behavior, and as a 40-something guy who doesn’t use social media, Freeman wasn’t equipped to handle the fallout.