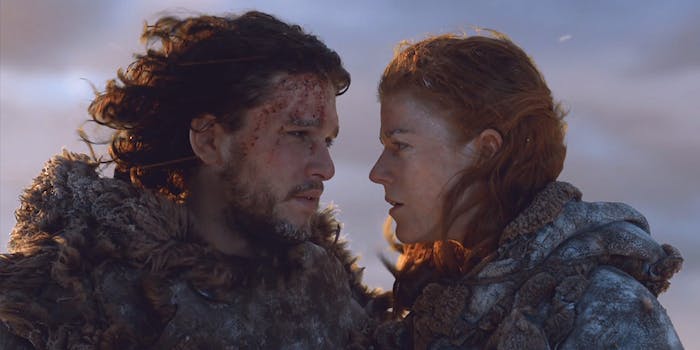 They went with an old-fashioned approach.

Game of Thrones co-stars Kit Harington and Rose Leslie officially announced their engagement Wednesday morning, after rumors of their engagement started to appear on U.K. websites and People.

Instead of announcing it through a representative or on social media (Leslie has a Facebook page but Harington isn’t really on it), the couple used the print edition of the Times—similarly to how fellow British actor Benedict Cumberbatch announced his own engagement in 2014. Harington and Leslie are listed as “Mr K.C. Harington and Miss R.E. Leslie,” and if you didn’t recognize their names, you may have missed it upon first glance.

“The engagement is announced between Kit, younger son of David and Deborah Harington of Worcestershire, and Rose, middle daughter of Sebastian and Candy Leslie of Aberdeenshire,” the notice in the Times read.

Although the couple had been linked together as far back as 2012 and split before reportedly getting back together in 2014, Harington and Leslie didn’t confirm their relationship until they appeared together on the Red Carpet for the 2016 Olivier Awards. After that, they started to address their relationship more openly in interviews. In a May 2016 L’Uomo Vogue cover story, Harington discussed falling in love with Leslie—who played the skilled wildling archer Ygritte and Jon Snow’s love interest for three seasons—while they filmed on the Game of Thrones set in Iceland.

“Because the country is beautiful, because the Northern Lights are magical, and because it was there that I fell in love,” he said in a May 2016 L’Uomo Vogue cover story. “If you’re already attracted to someone, and then they play your love interest in the show, it becomes very easy to fall in love.”

During the 10-month period when Harington had to lie about Jon Snow coming back to Game of Thrones, Leslie was one of the few people Harington was allowed to tell. (Leslie later said that Harington “hung [her] out to dry” for not telling her he revealed she knew about Jon’s fate.) By 2017, the couple had moved in together, and just a few months ago Nicole Kidman grilled Harington on The Late Late Show with James Corden on when he was going to get married.

And although rumors of their engagement had spread in July, Harington and Leslie shot those down.

No details of their forthcoming marriage have been announced, but we imagine it won’t have any of the touches the weddings their TV show has made infamous.