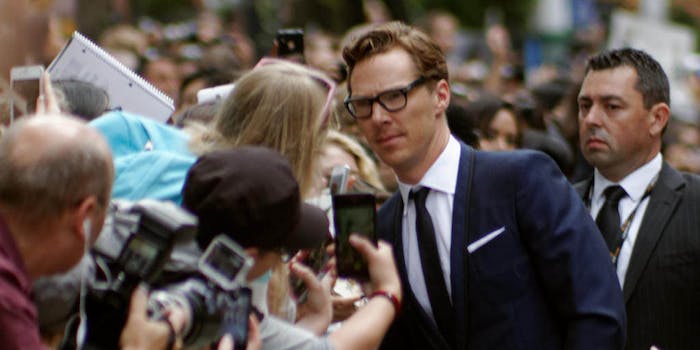 Sherlock is officially off the market.

One of the world’s biggest stars is officially off the market.

Benedict Cumberbatch is engaged to theater and opera director Sophie Hunter. The announcement appeared in the Forthcoming Marriages section of The Times, a British newspaper. However, Cumberbatch—who doesn’t use social media and usually doesn’t discuss his private life—didn’t put out the ad. Instead, it came from his parents, actors Timothy Carlton and Wanda Ventham.

For celebrities, the newspaper wedding announcement is so old-school that, in the age of Twitter announcements and viral video proposals, it’s almost unheard of. Yet Cumberbatch’s parents just did what anyone’s proud parents would do, and friends of the couple have already offered their congratulations.

And in case anyone thought it was a prank, Cumberbatch confirmed that the ad was in fact real.

“I am delighted to confirm this morning’s announcement that Benedict Cumberbatch and Sophie Hunter are engaged,” Cumberbatch’s rep told the Mirror.

Cumberbatch and Hunter have reportedly been dating since the summer. They appeared together in the 2009 film Burlesque Fairytales.

It’s easy to imagine Cumberbatch’s fans being distraught about their favorite actor getting married. One would be forgiven for assuming that Cumberbatch-watchers were collectively on the verge of a meltdown. The headlines practically write themselves. Indeed, some of his fans did tweet about their sadness after hearing the news.

Benedict Cumberbatch is engaged. I will diminish, and go into the west.

Almost as soon as the announcement occurred, the jokesters started coming out of the woodwork.

Benedict Cumberbatch got engaged. See? There’s someone for everyone. Even if you look like a botoxed cat.

But so far, the outcry of support online for Cumberbatch and Hunter has far outweighed any devastation.

How sweet. Benedict Cumberbatch got engaged and took out a traditional ad in a newspaper to announce it. Bless him.

Cumberbatch’s devoted fans, already protective of the actor, had stern words for anyone with hateful things to say about Hunter. On Tumblr, the discussion became meta, as fans took stock of the media’s portrayal of their reactions.

“Newspapers: everyone on the Internet will be devastated and crying and probably sending hate tweets,” greglestrade wrote. “My whole entire dash: OUr [sic] baby is grown up. What a good day. I hope he has lots of babies.”

“You know you’re in the right fandom when you wake up to the news of Benedict’s engagement and all you see is everyones [sic] unbelievable happiness,” eenumbers wrote.

Far from lashing out at Cumberbatch or his fiancée, fans are already imagining Cumberbatch having children, whom some have dubbed Cumberbabies or Babybatches. It’s clear that most Cumberbatch fans are just happy to see him happy.