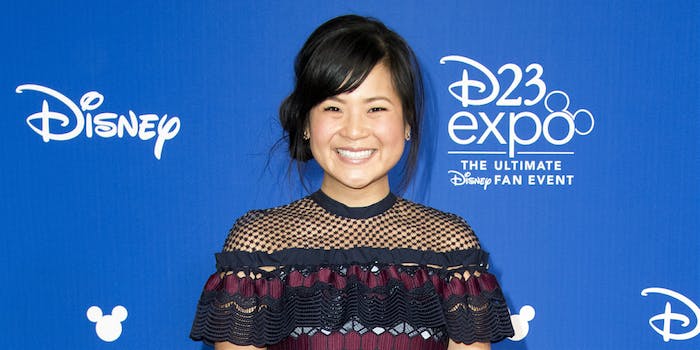 Now that Star Wars: The Last Jedi is out in the world, many fans can’t stop talking about it as they rehash and analyze some of their favorite plots and characters. But you never know who might be listening, as some fans discovered when they met Kelly Marie Tran after she overheard them talking about her Star Wars character.

Tran has posted extensively about the her first major press tour and experiencing fan reactions to The Last Jedi on her Instagram account over the past several weeks. Her latest story was one of happenstance: She and a friend were at a pub when they noticed that the table of people sitting next to them were talking in-depth about the The Last Jedi—and more specifically, Tran’s character Rose Tico.

You can hear snippets of the conversation in Tran’s video, which captures the moment she realizes that fans were talking about Rose unaware that Rose herself was nearby.

Tran eventually introduced herself to the group and took a photo with them; according to Tran, it was the first time she had heard others talking about The Last Jedi.

Acknowledging how hard it is to get a project made (as well as some of the backlash), Tran is thankful for all of the conversations and discussions the movie has caused.

“And no matter who we are, no matter where we’re from, if we can really listen and have a conversation about something — anything — it can really open up a door,” she wrote. “It can open us up to new ideas and new understanding. So thanks, wonderful people, for watching and dissecting and discussing. It makes me happy to know that we made something that’s starting a dialogue. My heart is so full, and my goals are so clear. Let’s tell more stories. Let’s have more conversations. Let’s get to know lives and worlds different from our own. And most of all — let’s open our hearts and accept our differences. More love, less hate.”