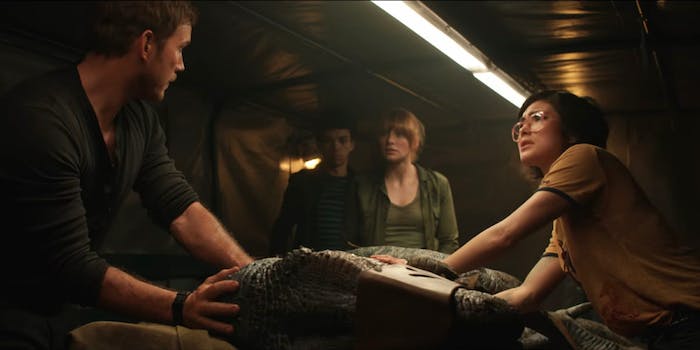 It's nowhere near the first time it's happened.

LGBTQ representation in major blockbusters is still abysmal despite calls from fans, with most of it—if it even exists—either getting cut out or existing as “subtext” to be expanded upon in press interviews. Jurassic World: Fallen Kingdom, which will be released in the U.S. later this week, is just the latest to follow this trend after one of the film’s actress revealed a line referencing her character’s sexuality was cut from the movie.

Daniella Pineda, who plays paleo-veterinarian (and former Marine) Dr. Zia Rodriguez in Jurassic World: Fallen Kingdom, told AOL Build that the film originally featured her telling Chris Pratt’s Owen Grady that she didn’t date men. The scene takes place fairly early in the film as several of the characters are inside a vehicle.

“I look at Chris and I’m like: ‘Yeah, square jaw, good bone structure, tall, muscles,’” Pineda explained. “‘I don’t date men, but if I did, it would be you. It would gross me out, but I’d do it.’ I love that I’m looking at Chris Pratt, the hottest guy in the world, and I’m like, ‘It would gross me out, but I guess I would do it!’ It was also cool, because it was a little insight into my character. But they cut it.”

According to Pineda, the scene was cut for time, noting that one cut of Jurassic Park: Fallen Kingdom was two hours and 40 minutes. She added that the scene where Zia references her sexuality wasn’t “relevant to the story, but it was a little glimmer into who she is.”

The scene may have been mere seconds of a movie that officially clocks in at more than two hours, and it might not have added anything to a movie full of violent dinosaurs and big political themes that don’t work as well as intended. But it’s yet another example of a film cutting out any reference to a character’s sexuality—however small—for convenient reasons, leaving to pick up potential subtext that remained and actors and screenwriters to explain it during the press tour.

We’ve seen more than our fair share of that erasure and breadcrumbs over the past few years as those involved want credit for including LGBTQ characters without explicitly putting them on the big screen. In recent years, characters from Guardians of the Galaxy Vol. 2, Power Rangers, and Beauty and the Beast have all been coded as LGBTQ with the slightest of blink-and-you’ll-miss-it nods. But other characters’ sexuality has also been made almost non-existent on-screen with Wonder Woman, Valkyrie in Thor: Ragnarok, Okoye in Black Panther, and Albus Dumbledore in the upcoming Fantastic Beasts film. And earlier this year, we saw a Solo screenwriter confirm that Lando Calrissian was pansexual while Deadpool 2 featured a relationship between Negasonic Teenage Warhead and Yukio (but almost completely ignored Deadpool’s pansexuality).

GLAAD released its annual report on LGBTQ representation in films last month, revealing that there had been a decrease in representation in movies released in 2017 compared to 2016. In the report, GLAAD singled out some of the superhero films released last year for erasing LGBTQ characters’ sexuality from comics, pointing out that more inclusive films can make a lot of money at the box office.

“With wildly successful films like Wonder Woman and Black Panther proving that audiences want to see diverse stories that haven’t been told before, there is simply no reason for major studios to have such low scores on the Studio Responsibility Index,” GLAAD president and CEO Sarah Kate Ellis said in a statement. “At a time when the entertainment industry is holding much needed discussions about inclusion, now is the time to ensure the industry takes meaningful action and incorporates LGBTQ stories and creators as among priorities areas for growing diversity.”