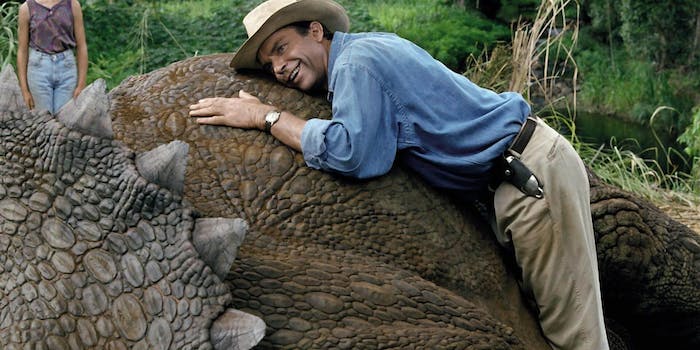 The original 'Jurassic Park' crew is back in business.

The three biggest stars of Jurassic Park will return for Jurassic World 3 in 2021, with Sam Neill and Laura Dern rejoining Jeff Goldblum in the franchise.

Colin Trevorrow will direct once again, co-writing the screenplay with Emily Carmichael (Pacific Rim: Uprising). Trevorrow announced the casting news at a special screening of Jurassic Park in Hollywood on Tuesday, finally confirming the speculation of a reunion.

The original Jurassic Park is still the most popular installment in the franchise, with the latest movie, Jurassic World: Fallen Kingdom, earning mixed reviews. Following in the footsteps of Star Wars, Terminator and Star Trek, it’s possible that a reunion of fan-favorite characters will help to revitalize the franchise. Goldblum had a cameo role in the last movie, inspiring speculation that he’d return for Jurassic World 3, and there’s a lot of nostalgia value attached to Neill and Dern as Alan Grant and Ellie Sattler.

Chris Pratt and Bryce Dallas Howard will reprise their roles from the first two Jurassic World movies, with the old guard likely to take on a supporting role like Han, Leia, and Luke in the Star Wars sequel trilogy.

We can also expect some big changes in Jurassic World 3 since the franchise no longer focuses on theme parks. Fallen Kingdom ended with the dinosaurs escaping into the wild, and judging by this recent short spinoff, they’re now causing havoc in public places. Maybe the government will recruit the old guard of Jurassic Park to take care of the problem.