It's all pure weirdness, and we want to try it all (even the black cheeseburger).

Japan is a notoriously weird place—and that makes those of us who love strange things deeply thankful. The cafes have cats, the girls are 2D, and everyone reads manga on the subway.

Japan’s food seems strange to Americans because many of their staples aren’t the same as ours: Miso, ramen noodles, natto. But beyond that they show their quirky sense of creativity in how the food is executed too—and its hard not to delight in biting into something completely different from anything you’ve had before.

Splice that with the imported U.S. fast food industry and, well, you have a recipe for beautiful food disasters. While some of the items on the list actually sound like pretty appetizing, others seem questionable at best. Pile up some napkins: It’s time to dig in.

1) The burger from hell Of all the odd fast food that Japan produces, nothing caught the attention of people internationally like the limited edition Kuro Burger, originally served by Burger King but later copied by McDonald’s and other chains. It’s hard to say which was the worst offender: the coal-black bun or the horrifying slice of black cheese draped over the peppered meat patty. There’s squid ink sauce on it too, which closely resembles the sludge found inside a storm drain. American reviewers called the burger “the worst,” so the whole thing seemed like a debacle—but it definitely got Japanese fast food on the map in a way no other burger ever did.

2) The most ridiculous burger 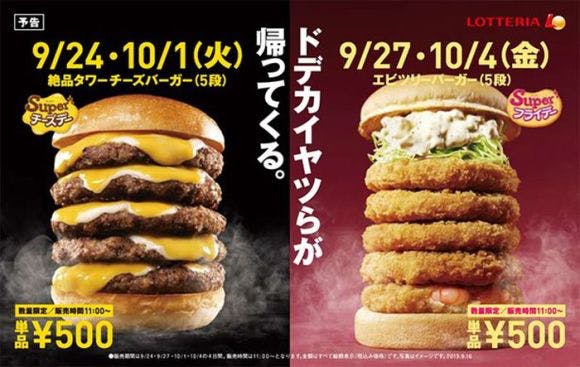 No one’s mouth is big enough to eat a five-patty burger (unless you happen to be this fish), but Japanese chain Lotteria didn’t care about that when it created these crazy stacks—beef and shimp patty versions—for its 40th anniversary. They were a one-day deal back in 2012, although Lotteria did mention that customers can custom order these sandwiches at any time (for a higher price). Some who tried the burger version found that it didn’t look quite as appetizing as the ad promised, which makes a lot of sense since it’s a giant stack of meat of questionable quality glued together with cheese. 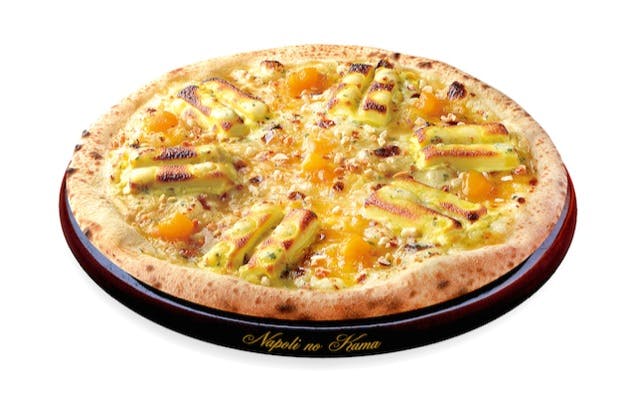 This is a Kit Kat pizza.

Let that idea simmer for a few. A”dessert pizza” called the Kit Kat and Mango Dolce Pizza, it comes topped with pudding-flavored Kit Kats, mango slices, mixed nuts, Gorgonzola cheese sauce and a honey maple sauce.  It was dreamed up by the folks at Nestle Japan and featured at Japanese pizza joint Strawberry Cones in 2014, where people with apparently no tastebuds could order it to their heart’s desire. The chain has since discontinued the item, but you can still order super odd pizzas from them, such as the Tuna & Potato, which they say is “best for the kids.” Translation: Will make your children smell awful.

4) Good if your hero is Takeru Kobayashi

At a glance, this doesn’t really look like a crazy burger. It looks like a Big Mac, which is what it is. To be specific, you are looking at the Grand Big Mac (right) and the Giga Big Mac (left). The latter boasts 2.8 times as much meat as the regular old Big Mac, and, shockingly, the calorie count is nowhere to be found on the official McDonald’s Japan website. This is likely a breeze for competitive eater Takeru Kobayashi, but for regular eaters—not so much. It’s for sale at the chain, so if you’re going to Japan soon you could actually snag this one. 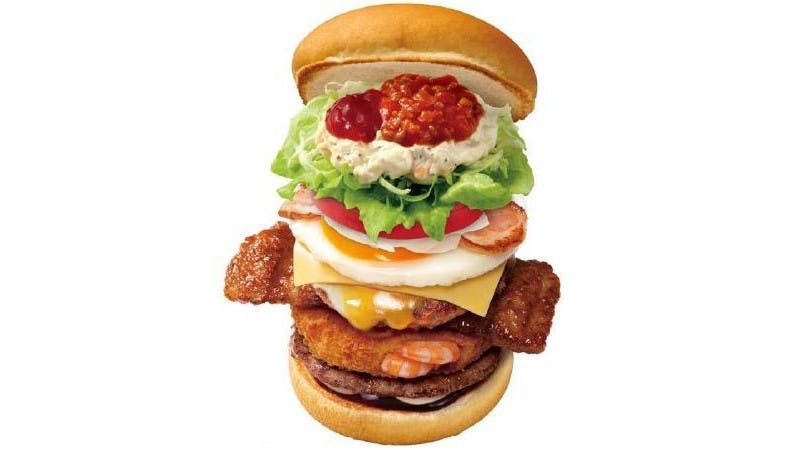 Japanese fast food chain Lotteria isn’t even trying to make real food any more. That thing is not food. In fact, it’s the polar opposite of what our mothers hoped for us when they told us to eat our vegetables. Called the “With Everything Burger,” the nauseating-looking stack contains lettuce, cabbage, egg, a cheeseburger, more cheese, a rib patty, a fried shrimp patty, a beef patty, pickles and your choice of sauces including ketchup, mayo, and teriyaki sauce. At 1,365 calories worth of pure sabotage for every organ in your body, you can get it for a few cents shy of $16. Killing yourself slowly has never been so effortless.

6) The burger we actually want to eat 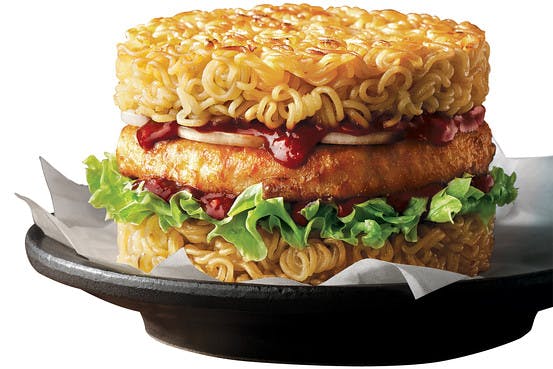 Lotteria’s ramen burger is not the only one of its kind. It was actually invented in 2013 by Keizo Shimamoto and sold at his food stand, Shimamoto’s Ramen Burger in New York City. Since then, it’s been copied by people in both Japan and the states, and U.S. chain Red Robin makes one of their own. The idea of chewy, cooked ramen blended with egg and compressed into a “bun,” maybe even brushed with a teriyaki glaze that intriguing, and there’s some part of all of us that fondly remembers ramen’s role in making sure we survived college. This isn’t exactly the grown-up version, but it does sound like it’d be great to hoover down the morning after a hardcore Attack on Titan marathon.