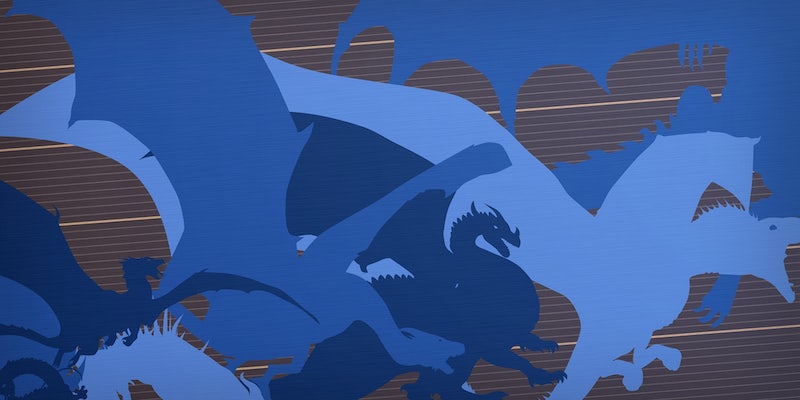 How big will the ‘Game of Thrones’ dragons get? Let’s do the math

How big will Khaleesi’s dragons get on Game of Thrones? We did the math—then we saw how their competitors measured up.

For all the twists, court intrigue, and sexposition, let’s be real: There’s really only one reason anyone is watching Game of Thrones, and that’s the dragons.

But disappointingly, the award-winning HBO fantasy TV series has shown us too few of them.

Daenerys Targaryen’s “children” are growing fast, however, and a newly released illustration from a forthcoming book hints at what lies in store for us. George R.R. Martin, whose A Song of Ice and Fire novels are the basis for Game of Thrones, is currently writing a companion guide to the books, called A World of Ice and Fire. He’s recently published an extract of this guide on his blog, chronicling the history of the Targaryen invasion of Westeros, which took place several hundred years before the events of the books and the show.

It’s got some badass dragon art, too. You can see Aegon the Conqueror standing astride his dragon mount, Balerion, the “Black Dread.” Turns out these dragons get really freaking big.

But seeing this picture got us thinking. Just how big is this dragon, and how does this bode for Daenerys’s own dragons? And how does it measure up to other famous fictional fire-breathers?

Here’s how we figured it out.

It’s time for some dragon math. To begin with, we know this picture is an accurate depiction of how big dragons can get. Martin confirmed as much to Entertainment Weekly. We also know from the books that the man standing on Balerion’s back—Aegon the Conqueror—was considered tall, although we don’t know his exact height.

The tallest people in Westeros are almost freakishly tall, however. Not just NBA tall—pituitary-gland-disorder tall. Gregor “The Mountain” Clegane dominates at close to 8 feet, while Robert Baratheon measures up at 6 feet 6 inches. As does Brienne of Tarth.

So lets estimate Aegon at around 6 feet 4 inches, or a not-insubstantial 190 centimeters.

It’s impossible to accurately measure the length of the “Black Dread” from this painting, though we can make a pretty good guess as to how tall its body is—around four times the height of Aegon, or 7.6 meters. Note that this doesn’t account for the added height of the dragon’s legs or its wings.

Balerion is supposed to be able to swallow a mammoth whole. Standing a paltry four meters tall, a wooly mammoth could easily fit within the dragon’s jaws. 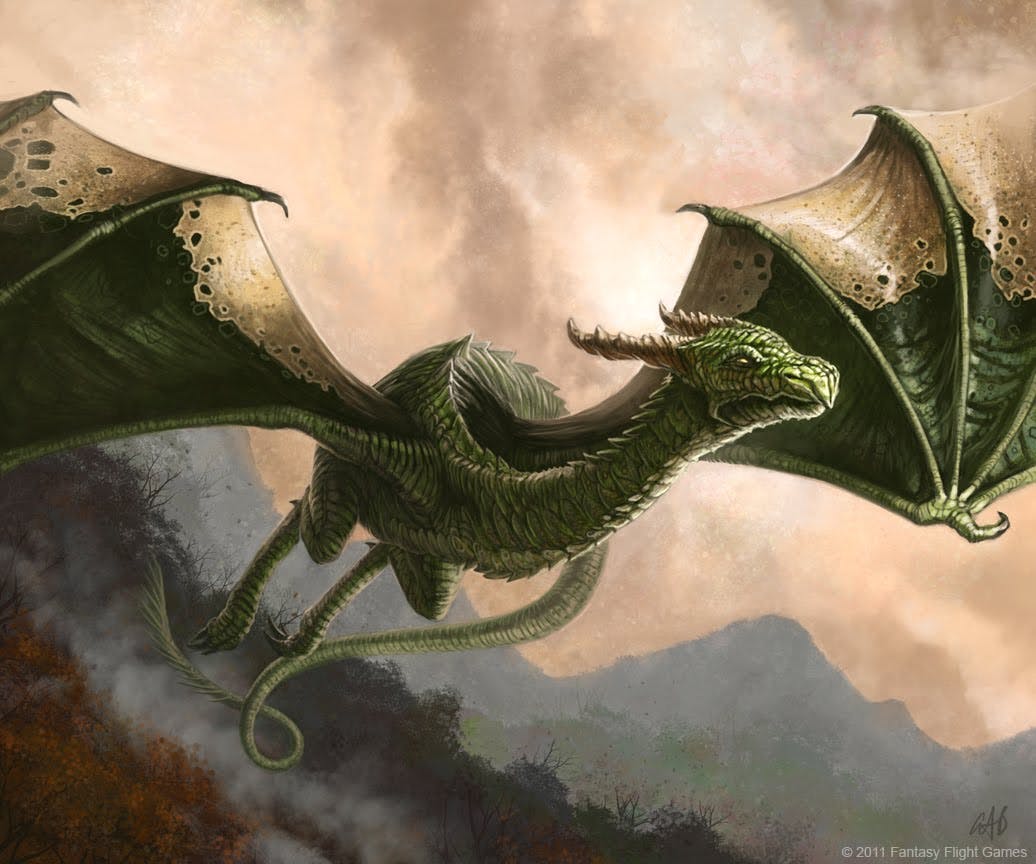 Next question: How long is it? Lacking a profile view, the best way to calculate this is to compare the dragon’s build to similar, real reptiles. It appears to be significantly bulkier than crocodiles or lizards—the best frame of reference, perfectly enough, seems to be komodo dragons.

Using this BBC infographic for reference, we calculated a komodo dragon’s height-to-length ratio (again, discounting the legs) at around 1:10. Transfer this ratio to Balerion and what do we get? A truly monstrous 76 meters long.

Or to put it another way, it’s two and a half times as long as a blue whale, the largest animal in existence.

Arya Stark stumbles across a long-dead dragon. Photo via HBO/Imgur

But how fast do dragons grow? We just don’t know. The showrunners have, however, confirmed that by the end of the series, we will be seeing dragons of a similar scale to the skulls Arya finds in the dungeons in season 1. We don’t know if the skull belonged to Balerion or not—but it certainly doesn’t look far off in size.

Balerion the Black Dread was an abnormally large dragon, but Drogon, one of Daenerys’s three dragons, is also growing exceptionally fast. It looks like we’ll be seeing dragons the size of a commercial aircraft before Game of Thrones’ time is up.

Wait, let’s not stop here. How does Balerion measure up to dragons from other works of fiction?

Here’s the bite-sized version of the chart. Click to expand: 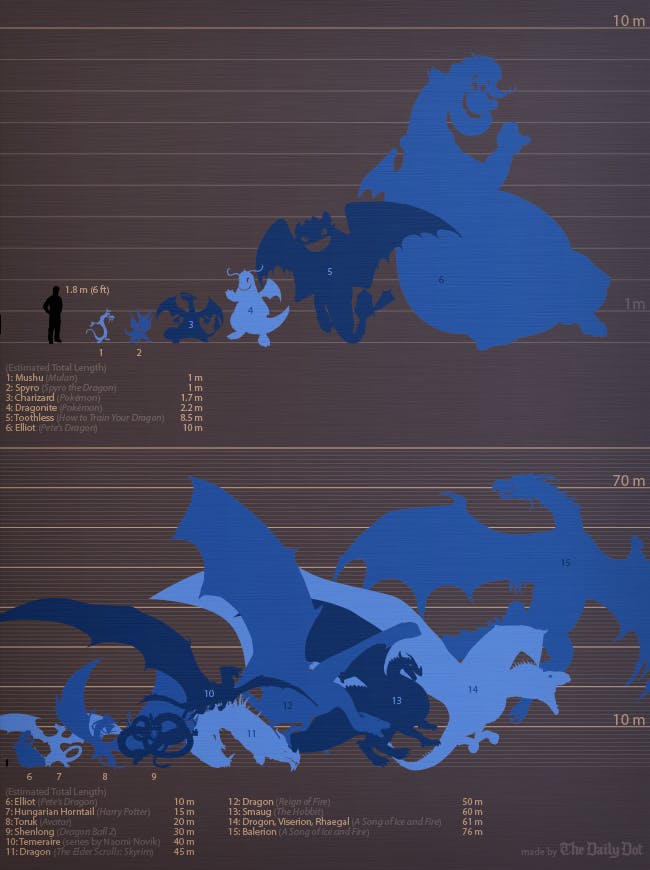 The ferocious Hungarian Horntail dragon (No. 7 in the infographic) is the bane of Eastern European wizards in J.K. Rowling’s Harry Potter fantasy series. He comes in at a confirmed relatively meager 50 feet in length, or 15.24 meters.

The Pokémon Dragonite (4) is even less impressive, standing just 2.2 meters tall. Let’s not mention the fire-breathing Charizard (3), whose diminutive frame only reaches the 5-foot-7 mark (1.7 meters), smaller than the average man.

Video game character Spyro (2) is literally child-sized, looking to be around 1 meter in height—as is Mushu, from the animated Disney film Mulan (1).

What about Smaug (13), from Tolkien’s The Hobbit? He’s better off. Forbes quoted the figure of 64 feet, or 19 meters, but a more in-depth analysis based on the film places the leviathan’s length at a solid 60 meters—less than Balerion, but still two-thirds of the length of a soccer pitch.

A little under this, we guesstimated the size of the dragons (12) in the 2002 sci-fi film Reign of Fire at around 50 meters long. That’s about four times the length of a double-decker bus.

Toothless, from DreamWorks film How to Train Your Dragon (5), is a very sorry 8.5 meters long (though it’s still one and a half times as big as the largest crocodiles on record).

But numbers don’t mean much by themselves. So we went ahead and stuck all these dragons—and many more—into an infographic, to really get a feel for how these dragons measure up to one another. We added Daenerys’s dragons (14), fully-grown at the 61-meter mark, and four-fifths of the size of the legendarily large Balerion.

Now click the below infographic to view every single dragon on one scale: 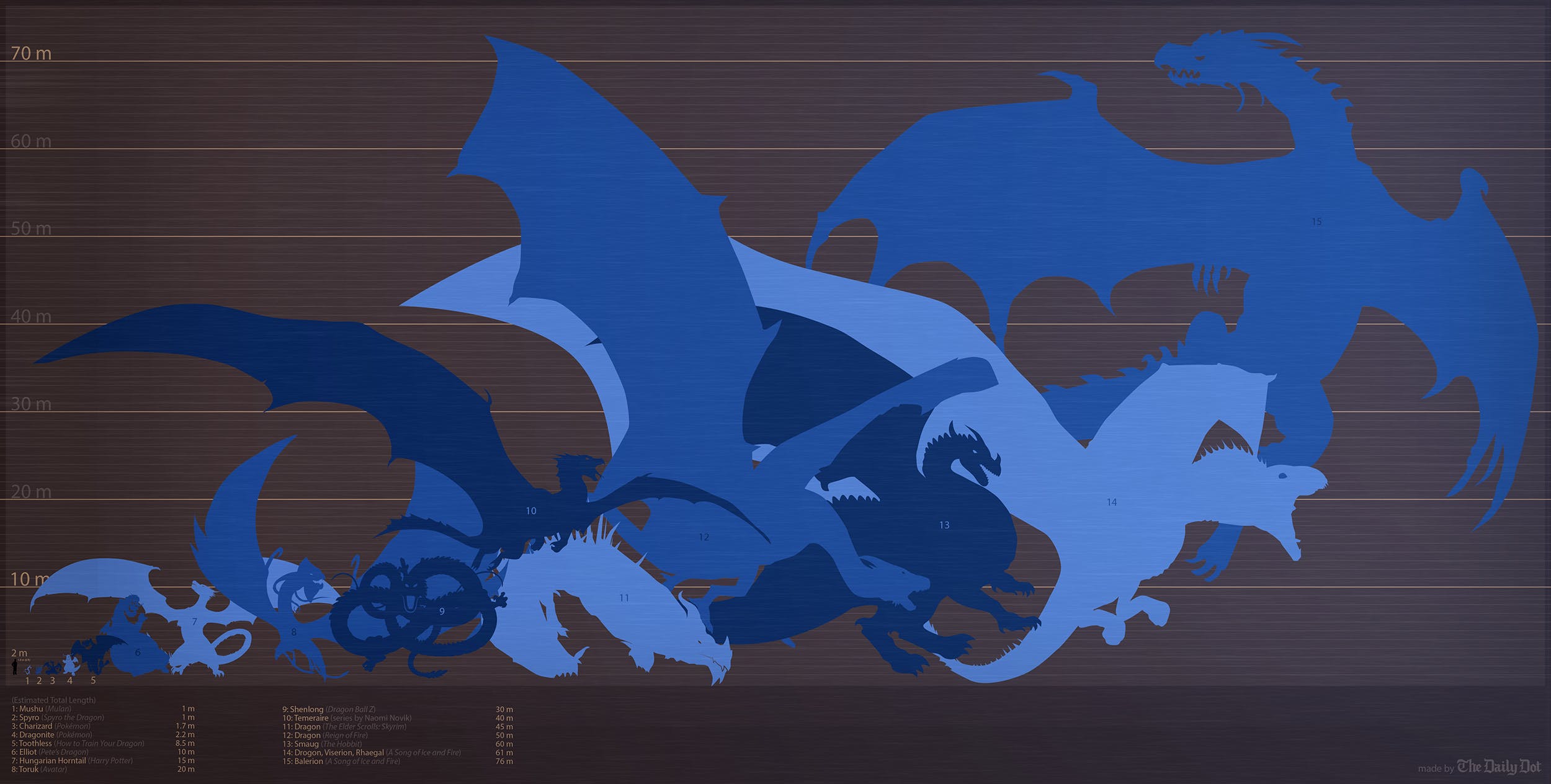 While it’s confirmed that we will see dragons of a comparable scale to Balerion in Game of Thrones by the end of the series, it took the Black Dread at least 100 years to get to the size he did—he was transported to Dragonstone a century before the Targaryen Invasion. We also know from the books that dragons never stop growing—but maybe this might just suggest that despite Balerion’s vast size, it was a particularly slow-growing dragon.

This does, however, throw up an interesting additional question: How large was Balerion at the time of his death? The dragon finally passed away at the age of around 200, we are told.

If we assume a steady rate of growth, this means by the time of Balerion’s death, roughly 100 years after the events of the picture, he may have been in excess of 150 meters in length. That’s five times as long as a blue whale, or one and a half times the length of a football field.

Winter is coming, but there’s a lot of heat coming to Westeros.