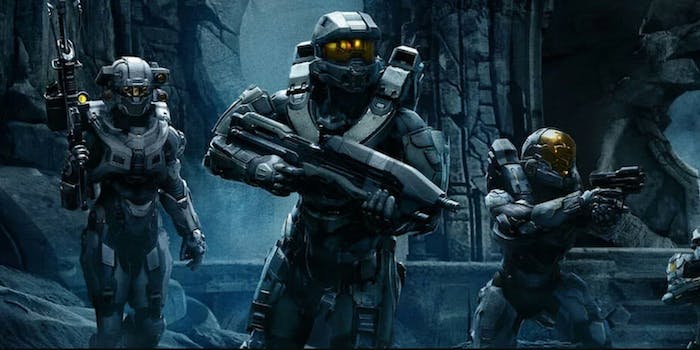 Production on the 'Halo' series is finally moving forward.

One of the most famous sci-fi first-person shooters of all time is finally being transformed into a television series.

Showtime’s live-action Halo TV series is becoming a reality, and we’ve finally heard some real, concrete news about the project.

The 10-episode TV series is in its infancy when it comes to production, but we’re well on our way to seeing Master Chief brought to life on the small screen—and that’s a huge delight for diehard Halo fans across the globe.

Here’s everything we know so far about Showtime’s upcoming Halo TV series.

The series has been described as a “live-action scripted drama” and will span 10 episodes for its first season.

There are no intricate plot details about the series just yet, but it will focus on the same narrative threads explored in the games. According to Showtime’s programming chief Gary Levine, the show won’t be the network’s Game of Thrones or anything like it. The aim is to be original, but memorable: “It’s our Halo,” he said.

Of course, it will be heavily centered on Master Chief, the genetically engineered super soldier who’s starred in most of the Halo games since the franchise debuted in 2001. The Master Chief of the Halo video game series is infamous for having never shown his face, and it’s unclear if the show will follow suit or if Chief’s face will be on display permanently throughout each episode or sporadically.

Chief will be joined by the “shrewd, audacious 16-year-old from the Outer Colonies” named Quan Ah, who meets up with the Chief at a “fateful time” for the duo.

“As we think about what it means to bring video game franchises to movie or TV—the biggest challenge can often be finding the right balance between moments fans have already experienced and moments that have yet to be experienced through a different medium, perspective, or creative lens,”343 Industries head Kiki Wolfkill wrote in an official announcement post. “We are excited to navigate these creative waters to bring you something that is both respectful of what you already know and love, but also new and surprising and enthralling.”

While most of the Halo series’ roles have yet to be filled, the most important one has been: Master Chief. Pablo Schreiber (American Gods, Orange Is the New Black) will star as the super-powered SPARTAN.

Australian actress and newcomer Yerin Ha will play a newcomer to the Halo universe, Quan Ah, who will act as something of a foil for Chief—potentially injecting humor into the role for some levity between the action. We don’t know a lot about the role just yet.

While Showtime has yet to elaborate on those roles, the Hollywood Reporter announced in November that the roles of Dr. Halsey and Jenny are being cast. Dr. Halsey is a scientist who created Master Chief’s AI companion Cortana, though it’s currently unknown what kind of role “Jenny” refers to. The casting notices are seeking an Asian woman from age 18 to 20 to play the part; it’s possible Jenny could be some sort of human civilian or even another SPARTAN soldier.

In terms of the cast behind the scenes, Showtime will obviously take most of the stake in the production, but Steven Spielberg’s Amblin Entertainment is one of the larger studios handling production. Kyle Killen (Awake) will serve as executive producer, writer, and showrunner. Rupert Wyatt (Rise of the Planet of the Apes) will direct multiple episodes and also serve as an additional executive producer. On Amblin’s side, Justin Falvey and Darryl Frank will be sharing duties.

Developer 343 Industries, which was responsible for the later development of the Halo series after taking over from Bungie, will be involved as well, likely offering consultation services on the project. This would ensure the project can remain as true to Halo as possible while allowing the media professionals to create the TV adaptation they set out to do.

There’s no concrete release date for the Halo series on Showtime, but recent reports have pegged production to begin in fall 2019 in Budapest, Hungary. This could point to a potential 2020 release date, if filming moves along at a decent clip.

It’s likely that production has been timed to coincide with the upcoming Halo video game installment Halo Infinity, which has yet to receive a release date. However, knowing 343 Industries’ efforts to offer Halo media across mediums simultaneously (releasing companion novels, apps, live-action tie-ins, and other content alongside games), it’s possible we could see both the series and game debut around the same time.