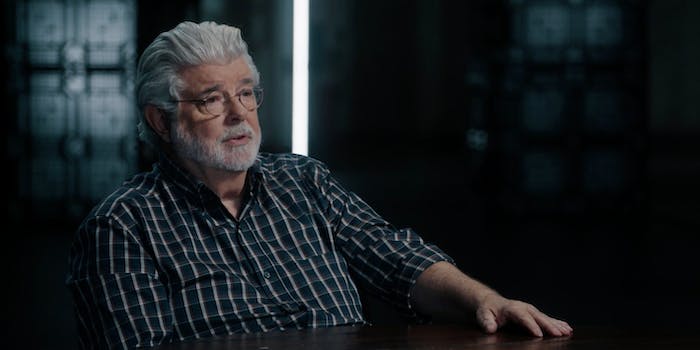 George Lucas had some, um, different ideas for the next ‘Star Wars’ movies

'If I’d held onto the company I could have done it, and then it would have been done.'

Every so often, a number of Star Wars fans imagine what could have been had George Lucas had been able to make the sequel trilogy he always wanted instead of The Force Awakens, The Last Jedi, and the upcoming Episode IX. Thanks to a recently published book, we have a better idea than ever—and it would’ve been weird and divisive.

James Cameron’s Story of Science Fiction—a six-part series that aired on AMC in late April and May—explored different factions of science fiction and pop culture staples as Cameron interviewed many of the men who created those films. Lucas was among them, featuring heavily in the series’ second episode, “Space.” A companion book to the series that contained Cameron’s full interviews with Lucas, Arnold Schwarzenegger, and four other famous directors was published by Insight Editions on May 15.

An excerpt from the companion book has now gone viral thanks to a tweet from illustrator Livio Ramondelli, who shared two quotes from Lucas that don’t seem to feature in the show. Although the Film Stage previously published one of Lucas’ quotes now being spread online on May 23, it had gone relatively unnoticed until now. In those excerpted quotes, Lucas discussed his plans for the sequel Star Wars trilogy he wanted to make before selling Lucasfilm to Disney (who then abandoned his pitch for its own story).

“[The next three Star Wars films] were going to get into a microbiotic world,” Lucas said. “But there’s this world of creatures that operate differently than we do. I call them the Whills. And the Whills are the ones who actually control the universe. They feed off the Force.”

But Lucas also predicted that his idea wouldn’t have been popular with fans seeing how fans reacted to his addition of midi-chlorians as a way to measure a person’s Force potential in the prequel trilogy. But it also touched on an aspect of Star Wars fandom that’s all too prevalent today: the toxic backlash that would’ve likely followed the Star Wars movie he wanted to create.

“If I’d held onto the company I could have done it, and then it would have been done,” he said. “Of course, a lot of the fans would have hated it, just like they did Phantom Menace and everything, but at least the whole story from beginning to end would be told.”

As far as I've seen, these are the first specifics George Lucas has shared about what his vision of Episodes 7-9 would have been. This comes from @insighteditions awesome companion book to "James Cameron's Story of Science Fiction series" on AMC: pic.twitter.com/Wtlw8zlrqv

We’ve heard bits and pieces of the Star Wars trilogy Lucas wanted to make over the years. In a 2015 Vanity Fair cover story that previewed The Force Awakens, director J.J. Abrams said that Lucas’ Star Wars sequel trilogy would have focused on “very young characters” (with Lucasfilm saying that the characters would’ve been teenagers), but Disney and Lucasfilm distanced from that vision and ended up with older protagonists. The trilogy may have potentially included a Jedi temple that had Lucas’ seal of approval, showed Leia Organa using the Force (which we ended up getting in The Last Jedi) and training with her brother Luke Skywalker, and Luke dying at the end of Episode IX.

Lucas’ vision of what he wanted to do with Star Wars will never make it to the big screen the way he wanted to—although there may be more instances of certain aspects trickling in there. For one thing, The Last Jedi shied away from the midi-chlorian explanation of the Force and returned to the idea of it being a more spiritual essence, one that’s present everywhere and in everything and won’t die with the Jedi in Luke’s first lesson to Rey.

The midi-chlorians comment is mentioned as part of a larger conversation about AI and religion within the context of Star Wars. In James Cameron’s Story of Science Fiction (which is viewable on Google Books), Lucas compared the midi-chlorians to fuel that helped run a car (aka humans and other creatures in the galaxy), which Cameron argued was Lucas trying to insert some science into a “creation myth.” It’s a fascinating conversation worth reading, even if you would hate what Lucas had in mind.

And Lucas may be right in how fans would receive his larger focus on midi-chlorians, especially considering how some fans have reacted to what has appeared in the new movies. What his quotes do show is just how much was—and still remains—possible in the Star Wars universe.