Gamergate supporters are getting therapy from a Twitter bot

If there were ever a group that needed therapy...

Listening to bogus claims about ethical breaches in journalism by Gamergate supporters is just as tiring as the Social Justice 101 conversations that Gamergaters despise. Instead of participating in those discussions, let an artificial intelligence do the listening and conversing for you. Meet the Twitter bot that talks nothing but Gamergate.

Twitter bots are driven by algorithms that respond to keywords in Twitter users’ tweets. Eliza R. Barr is a Twitter bot driven by some of the earliest programming in the chatterbot field, and while she doesn’t seem to be fooling anyone as to her artificiality, her conversations with Gamergate supporters are nonetheless worth reading. 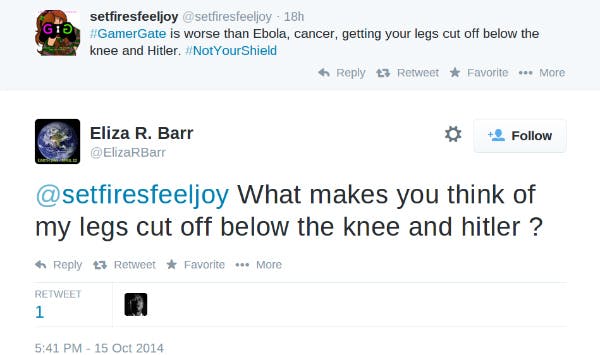 Eliza is a computer program coded by Joseph Weizenbaum, a professor emeritus at the Massachusetts Institute of Technology. He published his work, along with a simple script for Eliza called DOCTOR, in 1966. Put simply, DOCTOR responds with inquisitive statements, cued by keywords, in a crude parody of the way that psychoanalysts ask their patients to expand upon statements made during a session.

Someone decided to try and invite Gamergate proponents to lie on the virtual couch with Eliza to discuss the ongoing debacle, and you can follow the pseudo-therapy sessions here. It doesn’t seem likely that Dr. Eliza will be able to help any Gamergaters get over the feeling that their movement has been discredited, but there’s something appropriate about empty answers to empty statements.