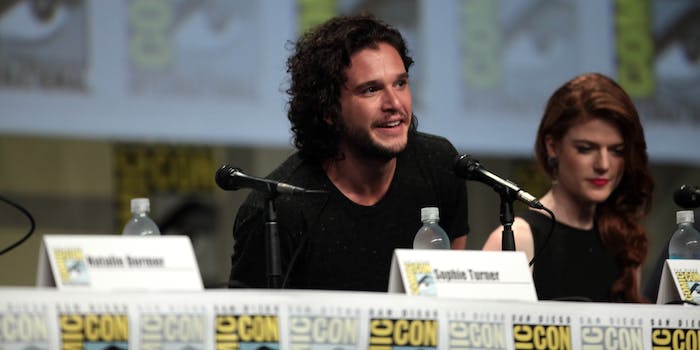 He's been complaining about it for ages. So why keep it?

The Game of Thrones cast is making its way to Belfast, Northern Ireland, to begin working on the show’s sixth season, but one particular sighting is further fueling what might end up being the worst-kept secret in Westeros.

Game of Thrones fan site Watchers on the Wall is reporting that Kit Harington was spotted and photographed by a fan on a flight to Belfast with fellow Game of Thrones actor Tom Wlaschiha. But more importantly, he has yet to cut his hair; his man bun is still intact.

There are at least two other alleged fan sightings, one in June and another July, in Belfast, which is interesting because it also happens to be home to the show’s main studio. Game of Thrones has also filmed  in Croatia and Spain.

There are plenty of reasons for Harington to be in Belfast. One, that he’s an adult and wants to go to Belfast, whatever Facebook trending topics that come out of it be damned. His friends and castmates are all together in one place, so he could’ve gone just to see them again for one last hurrah before most of them begin filming.

According to fans he’s run into over the past month or so, he’s refused pictures and asked them not to take any of him. (Although some do anyway.)

Literally just shook (jon snow) kit Harringtons hand and he said he's not allowed pics but it was nice to meet us!

It is possible he could still be part of the show. If Jon Snow is dead in the show—as the showrunners have insisted and director David Nutter even told President Barack Obama—he could simply be there to film his funeral scene (as Charles Dance did last season) or be used in a flashback (one of Bran‘s visions, perhaps?). But plenty has been written about what Harington could possibly be doing in season 6 if in fact Jon is not dead—or doesn’t stay dead.

As with Harington’s appearance at Wimbledon earlier this month, the main focus of the paparazzi-esque coverage on Harington is his hair. No matter how many frame-by-frame examinations of his death scene there are or out-of-context quotes from old interviews are debunked, there’s still hope that Jon is alive so long as he doesn’t touch a single hair on his head. He’s a potential walking spoiler.

And people are obsessing over it for a very simple reason: Harington has said he hates his long hair. If Jon really is dead, there’s nothing keeping him from chopping off his wavy locks. So why hasn’t he?

For what it’s worth, Harington doesn’t understand our collective obsession with it.

“There is always someone who wants to ask me about my hair and it just drives me insane,” he told BBC Radio 1 back in April, two months before his character’s potential demise. “It’s hair, it’s just hair. I’m just amazed by it, it follows me everywhere.”

Here’s an abbreviated history of the Internet’s obsessive tracking of Harington’s hair.

Harington appeared on the cover of Rolling Stone around the start of the show’s fourth season, and while it was long before Jon potentially met his end via mutiny from the Night’s Watch, he already worried about the limitations of his career due to his locks.

“I told my agent, ‘No more swords, no more horses,'” he said. “You [don’t want to] get stuck in things. And maybe I can cut my fucking hair.”

Many of Harington’s female Game of Thrones co-stars film with wigs, but Harington’s mane of increasingly long and curly hair has always been his own—until he wanted to change it.

He appeared on Live with Kelly and Michael last June to promote Game of Thrones where he revealed that his hair has its own contract—along with the conversations between agents, managers, and HBO.

“I’m just not allowed to cut it,” he told Kelly Ripa and guest host Jim Parsons. “I didn’t realize this until recently and then I kind of, I wanted to cut it—I’ve had long hair for ages—and they were like, ‘No, no, no, that won’t be happening.’”

Talking to Vulture, Harington’s co-star Sophie Turner revealed that despite any public displays of irritation when it comes to not being able to do what he wants with his hair, he really loves it.

Everyone he meets knows how he is about his hair! [Laughs.] I mean, Kit is, like, obsessed with his hair. He’s always talking about it. Like before premieres and stuff, you’ll see him in the mirror curling his hair, putting ringlets in his hair. He’s going to kill me for saying this. [Laughs.] He’s very protective about his hair. Understandably! It should be insured, I swear.

Harington’s hair contract must be pretty tight because for Testament of Youth, he had to wear a wig instead of cutting his hair; he was, however, allowed to shave the beard for the project.

His Game of Thrones co-star Natalie Dormer has playfully called him an idiot for it in an interview, and speaking to Metro, he wondered how she, Emilia Clarke, and Lena Headey managed to get out of contractual hair while he managed to “screw himself over.”

“I don’t want the bother of it all really,” he said. “If you look a certain way or you have a certain look it dominates what people think you are. So I’ll cut it off quite soon. As soon as I’m allowed.”

Harington showed up to the London premiere of Testament of Youth with a noticeable lack of long, flowing locks, causing book fans—who’ve been debating this very topic for about four years now—to wonder even then if that was a confirmation that Jon was dead.

In an interview that got more coverage for Harington’s complaint about being sexualized, he yet again was baffled about the hair obsession.

“Yeah, it irritates me,” he told News.com.au. “People become fascinated by very particular things and I find that really interesting, whether it’s a catchphrase or someone’s hair … But I love that I seem to have brilliant hair. I suppose it’s a great thing in life, isn’t it?” He laughs. “Especially that I’m terrified of going bald.”

June 4, 2015: He assures fans that he’s wearing a wig in Testament of Youth

Harington’s appearance in Testament of Youth shocked fans not only because he was missing Jon’s trademark facial hair, but also his hair was much shorter in it. Although he didn’t address the shorter length at the January premiere, he did confirm to Nylon that there were no locks lost when he actually shot the movie.

“That was a wig!” Harington explained. “I couldn’t cut my hair. Part of being an actor is going into a role and looking a certain way. I’m doing this ongoing role and I have to go about looking that way and that’s what I just look like right now. Whenever Thrones finishes and the next role comes up, I’ll change.”

Right after “Mother’s Mercy” aired, Harington said in an interview with Entertainment Weekly’s that he wouldn’t be back for season 6. Although it doesn’t state when the interview took place, Harington seemingly kept his word about cutting his hair. Telling James Hibberd:

I look like Jim Morrison right now. I don’t know what to do with it. I can cut it if I want, but it’s probably wise to leave long until I know what the next part is. I’ve kind of grown accustomed to it, it would feel weird to change it. [Note: Shortly after this interview was conducted, he cut it.]

By the time Harington had to do press for the fifth season, enough of it grew back that many fans were left none the wiser to his hairy escapades.

July 2, 2015: Harington attends Wimbledon with his brother and the Internet goes wild

He’s already been spotted in Belfast, but when he made an appearance at Wimbledon, the speculation about his hair and Jon’s chances of being alive reached a breaking point, as well as a trending topic online.

Kit Harington with his brother Jack at Wimbledon. pic.twitter.com/zpK1RxLyFx

And now the Internet’s Watch begins.