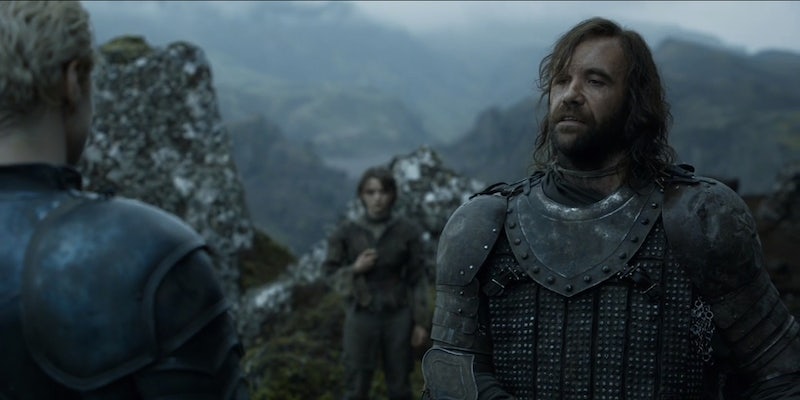 His previous comments have fueled plenty of speculation.

Game of Thrones is putting extra effort into keeping the lid on spoilers this year. With a potential major twist on the line (along with some other plots that haven’t yet appeared in George R.R. Martin’s books), HBO is refusing to distribute review screeners to journalists, and cast members are sure to be extra vague in interviews.

It’s already reaching the level of secrecy we’ve come to expect from Marvel and Lucasfilm, and the premiere isn’t for another month.

But Ian McShane, one of the new additions to Game of Thrones’s sixth season, basically said, “Fuck it.”

Speaking with the Telegraph last week, McShane addressed the criticism he received after revealing in a different interview that he would be bringing back “a much-beloved character who everybody thinks is dead.” He mocked the Internet’s ability to make something out of pretty much any comment.

“You say the slightest thing and the internet goes ape,” McShane said. “I was accused of giving the plot away, but I just think get a fucking life. It’s only tits and dragons.”

Pressing on, McShane discussed the process of agreeing to play the mysterious role, a quote which the Telegraph noted in parentheses “gives away another plot twist.”

“They asked me if I wanted to do Game of Thrones and I said, ‘Sure, I’ll be able to see my old pals Charlie Dance and Stephen Dillane,’ and they said, ‘No, we’ve killed them off,’” he said. “I wasn’t sure whether I could commit, but then they said it would only be for one episode, so I said, ‘So that means I must die at the end of it. Great, I’m in.’”

Fans who have followed Game of Thrones press for months won’t consider this a surprise or much of a spoiler.

We’ve known that McShane had a minor role since the casting announcement in August revealed that McShane had “a relatively small amount of screen-time during the season, yet his character is of key importance.” We know McShane’s episode count now, though his comment about his character dying is probably more of an assumption that he made at the time than a fact that he released as a spoiler.

The original note about McShane’s screen time offered some guidance to fans speculating about who he would play. They speculated that McShane fit the description for the Priest role, which appeared to be a combination of Septon Meribald and the Elder Brother from A Feast for Crows.

McShane also told us in November that his character would be bringing back a fan favorite, but the March interview revived interest in that small but important plot point. If it comes to pass, it could confirm one big fan theory—and even lead to another.

According to this theory, the Hound isn’t dead, as most of us have been led to believe (we haven’t seen him since the end of season 4, when Arya Stark left him for dead). But unlike Jon Snow, who many believe will be resurrected in season 6, the Hound never died—at least according to the theory. In fact, the argument goes, he’s now working as a gravedigger in a place known as the Quiet Isle and wearing a scarf to hide the burns on his face.

Brienne of Tarth and Podrick Payne see the gravedigger in A Feast for Crows and learn that the Hound is dead from the Elder Brother, who is vague on the details of the Hound’s “death,” though there is ample evidence to suggest otherwise. The introduction of Ser Robert Strong—the reanimated corpse of the Mountain—suggests that we may end up seeing Cleganebowl, a fight between Ser Robert Strong and the Gravedigger.

McShane’s comments may not count as true spoilers, but we’ll probably get hype anyway. One thing’s for sure: we’re hype for more great soundbites—and maybe even that epic battle to come.