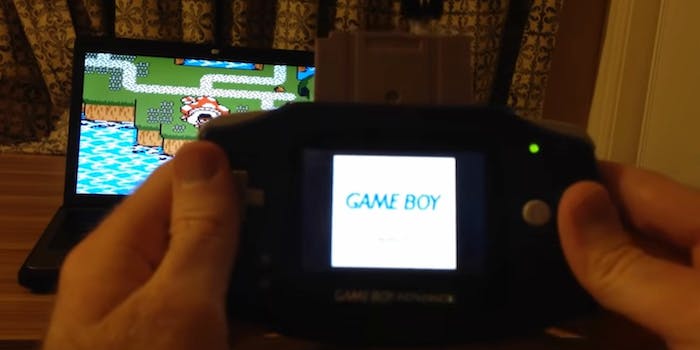 If you aren't a tech wizard, you can just buy it.

The Nintendo Switch may have its fancy graphics and the 3DS is still a thing somehow, but absolutely nothing will ever compare to the simple beauty of the Game Boy. That D-pad got me through Kirby and Pokemon more times than I care to admit. With both the NES Classic and SNES Classic flying off the shelves during their initial runs, retro gaming is clearly back in fashion, if only for the folks who can truly appreciate it. That’s why it’s cool to see you can now use your old Game Boy as a controller thanks to a special cartridge whipped up by an inventive hacker.

Originally reported by Gizmodo, Alex Iannuzzi of InsideGadgets got the idea for a Game Boy system-as-controller after seeing others swap out the Game Boy’s original PCB board (which connects electronic components) and replace it with their own, according to his original post.

Iannuzzi posted a video of himself plugging his hacked cartridge into a Game Boy Advance and playing Super Mario Bros. 3 on his laptop.

Thankfully, if you’re a technological brick wall like me and don’t understand how any of that stuff works, Iannuzzi is selling the hardware and receivers you’ll need for between $14-$23. Iannuzzi says the Game Boy TX cartridge (the bit that turns it into a controller) should work on any Game Boy, GBA, GBA SP, Game Boy Color, and even the Game Boy Pocket.

Iannuzzi also says he’s working on a smaller Game Boy TX cartridge that should work on the Game Boy Advance, the GBA SP, the GBA Micro, and both the Nintendo DS and DS Lite, since those all accepted the half-size cartridges the GBA was built for. A receiver for the SNES is on its way, according to Iannuzzi’s product page.

If you do know your coding stuff, then Iannuzzi’s listed out his entire process on InsideGadgets. It’s a fascinating read, even though it’s a little over my head, and it certainly shows the length that retro gaming fandom is willing to go to preserve (or mod) their beloved hardware.