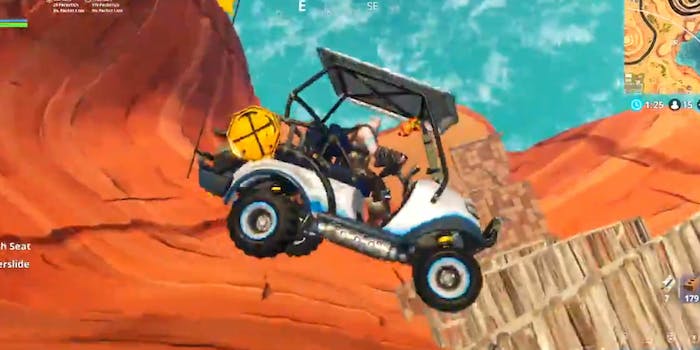 No golf cart left behind.

I love it when a plan comes together, but I love it more when they fall apart. A Fortnite streamer by the name of “Mr.Muselk” knows this all too well after he hilariously botched a rescue attempt in the wildly popular battle royale shooter.

Muselk was gliding along at the start of a game when he spotted an enemy at the edge of a sheer cliff. After taking the enemy player down, Muselk noticed another player had gotten stuck at the bottom of the cliff on a small patch of dry beach 200 meters below. The trapped player looked friendly enough, so Muselk decided to build a series of wood and brick stairways down toward him.

After getting about 20 feet above the player, Muselk noticed he had hit Fortnite’s depth limit for environmental destruction and creation, meaning he couldn’t build anything lower to get to the player still trapped below.

Inspiration struck Muselk, who had seen a golf cart resting at the top of the cliff. That extra height and the bounce of its roof might just get his pal out, he thought, so he nabbed it and began to edge toward the cliff, and… well, just watch:

Watch as @MrMuselk attempts to rescue a fellow player.

As you can see, Muselk bounced atop several flights of his self-made stairwell before careening down the side of the cliff and bouncing straight into the player he was trying to rescue. The player was unceremoniously bounced into the sea, where death immediately took him.

No man left behind indeed. Muselk followed up the goof with a well-humored tweet.

I like to think he was trying to stop me from flying over the edge. In the end. He saved me.

Golf carts aren’t the only vehicle to cause some mayhem in Fortnite. Shopping carts have been the source of many a meme about rocket jumps and sick stunts. Fortnite has also had a really cool streak of in-game events that only some players are lucky enough to see.