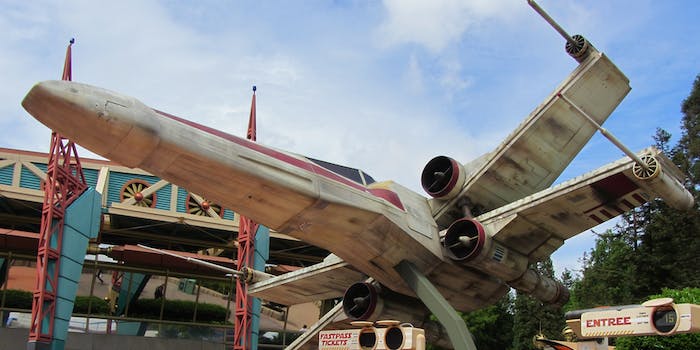 Get ready for fighter-pilot action.

The first standalone Star Wars film will be called Rogue One and will star Felicity Jones, the Walt Disney Company announced on Thursday.

Gareth Edwards (Godzilla) will direct the film, based on a screenplay by Chris Weitz. It is scheduled for release on Dec. 16, 2016. Weitz is still writing the script for the film, as evidenced by a recent tweet.

@CinderellaMovie opens this w/e as I live out my dream of writing in the @starwars galaxy…thank you Jedi godmother pic.twitter.com/TNNxEvtXnU

Disney also announced a release date for Star Wars Episode VIII, directed by Rian Johnson (Looper). That film, the third in the saga under the Disney banner, will be released on May 26, 2017. It will be the first time Disney returns to a May release for a Star Wars film. Lucasfilm released all of the first six core films in the saga in May.

The name Rogue One immediately calls to mind Rogue Squadron, one of the groups of fighter pilots that defended the Rebel Alliance’s base on Hoth in 1980’s Star Wars Episode V: The Empire Strikes Back.  The group has been the subject of many books, comics, and video games, but it has not been explored outside of its brief appearance in The Empire Strikes Back.

Felicity Jones’ casting makes Rogue One the first Star Wars movie with a single female lead. (Daisy Ridley is expected to be one of two or three lead actors in The Force Awakens this December.) The Hollywood Reporter first broke word of her casting in early February.

In a post on StarWars.com, Lucasfilm described the standalone films as “a unique series of big-screen adventures that explores the characters and events beyond the core Star Wars saga.”

The current plan is for Disney to release a new Star Wars movie about once every six months to one year, mirroring their strategy with the Marvel Cinematic Universe.