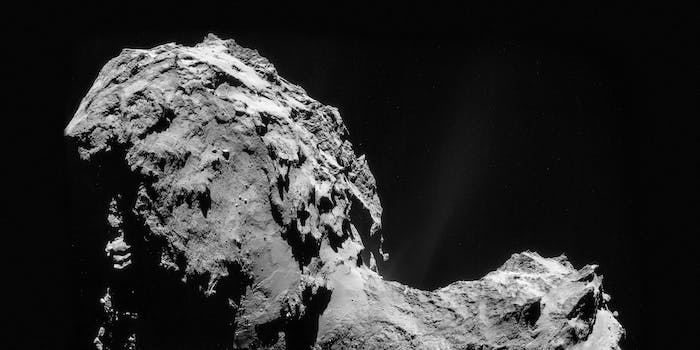 The European Space Agency’s Rosetta mission experienced a bit of a bumpy landing, but its probe is transmitting from the surface of Comet 67P/Churyumov-Gerasimenko.

Wednesday’s historic comet landing was watched by space exploration enthusiasts all over the world. They waite with bated breath for the news that Rosetta’s landing probe, Philae, had arrived at its destination.

Philae’s harpoons failed to fire when it first touched down, so it’s still relying on the comet’s weak gravity to stay put. It actually bounced gently off the comet’s surface a couple of times before ending up at its current location, as indicated by the ESA’s adorable Philae Twitter feed.

The mission’s most immediate problem is power, because Philae only had 60 hours of battery life when it detached from the Rosetta probe. It needs to recharge using its solar panels, but early data from the surrounding area suggests that it’s hidden beneath a large overhang, and will only receive about an hour and a half of sunlight for every 12-hour rotation of the comet.

I’m in the shadow of a cliff on #67P. Where exactly? That’s what my team is in the process of finding out! #CometLanding

.@Philae2014 you’re in a shadow? How am I supposed to spot you there?! Our teams working hard to find you :)

Now that I’m safely on the ground, here is what my new home #67P looks like from where I am. #CometLanding pic.twitter.com/gFmt8Ldvpa

Another stunning image of my new home taken by ROLIS during #CometLanding yesterday, when I was just 40 m from #67P pic.twitter.com/I8OZ5kXjXA

One solution to the solar power problem would be to move Philae, but this is harder than it sounds. The lander can send signals to Earth via Rosetta, but there’s a half-hour delay so it’s not equivalent to a remote-controlled vehicle.

The current plan begins with pinning down Philae’s precise location, which is tricky because Rosetta has to take photos from its orbit around the comet. Once the ESA knows exactly where Philae is it will be easier to figure out a next step, although bouncing the lander to a new location could prove difficult thanks to its low battery power.

Aside from these issues, Philae is transmitting data very clearly. The ESA is already posting the first ever photos taken from the surface of a comet. The information gathered from this mission will help scientists test many theories about how comets have affected life on Earth. The Rosetta mission itself was named after the Rosetta Stone, as the ESA hopes data from Comet 67P will help us find new ways of understanding the Solar System—and potentially the earliest stages of life on Earth. One of Philae’s main tasks is to search for organic compounds on the comet.

For the next few days at least, Philae will continue to transmit data from its new home between the orbits of Jupiter and Mars, 310 million miles from Earth.