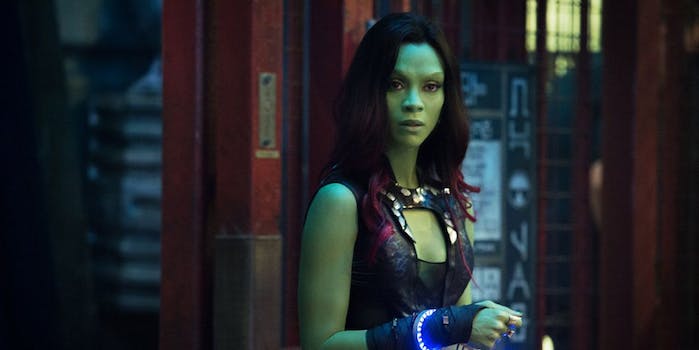 Why is Gamora missing from ‘Guardians of the Galaxy’ merchandise?

Fans are protesting the lack of Gamora merchandise with the #wheresgamora hashtag.

The Disney Store is packed with fairy tale princesses, but when it comes to other female characters in the Disneyverse, the track record isn’t so good. Just in the past couple of years, it managed to let down fans two of the most popular female characters in geek culture: Princess Leia and Black Widow.

First, the Disney Store only stocked girls’ Avengers shirts with bizarrely sexist slogans like “I Need A Hero,” while boys’ shirts read “Be A Hero.” To make matters worse, all of the male Avengers got their own shirts, while Black Widow was mysteriously left out. Then fans were disappointed to learn Disney wasn’t stocking any Princess Leia products at all. (Disney officials later clarified they intended to release Leia merchandise in a second wave of Star Wars items, which only made fans feel a little better.)

This all seems like an uncharacteristic commercial failure on the part of Disney, which is usually very good at squeezing every last dollar out of its audience. But wouldn’t you know it, it looks like it’s repeating the same old mistakes with this summer’s Disney/Marvel hit, Guardians of the Galaxy.

Blogger Amy Ratcliffe noticed Disney’s mysterious dearth of Gamora merchandise when she saw a men’s T-shirt featuring all of the Guardians except Gamora. Then when visiting her local Walmart, she realized that Gamora had inexplicably been excluded from GotG merchandise displays that included all four male members of the team. Ratcliffe suggested the hashtag #wheresgamora, which people have since been using to ask Marvel and Disney, well… where is Gamora?

Hey Marvel, me and my daughter loved your movie, it’s a damn shame you seem to have only made merch for the male characters… #wheresgamora

We took a look at the Disney Store website, where the GotG section lists several t-shirts and toys for Star-Lord, Rocket Raccoon, Groot and Drax. The only thing that comes up in a search for Gamora is a Disney Infinity playset (which includes Star-Lord and Gamora), with no T-shirts or costumes available for either her or the other main female character in the movie, Nebula. Over on Amazon you can find a bobble-head doll, Lego mini-figure and another collectable doll, but still nowhere near the number of shirts, costumes, accessories, toys, or figurines available for her male counterparts.

Exit polls indicate 44 percent of GotG’s opening-week audience were women, yet Disney/Marvel still seems unaware or unconvinced that it can profit from this half of their audience. At San Diego Comic-Con last month, women’s T-shirts for Marvel’s upcoming Agent Carter TV series sold out in a day, with the bemused attendants saying that they hadn’t expected this kind of interest. This is after years of fans clamouring for a female-led superhero movie from anyone. People are practically begging to throw money at characters like Black Widow, Princess Leia, and Gamora, yet merchandisers remain slow to fill that need.