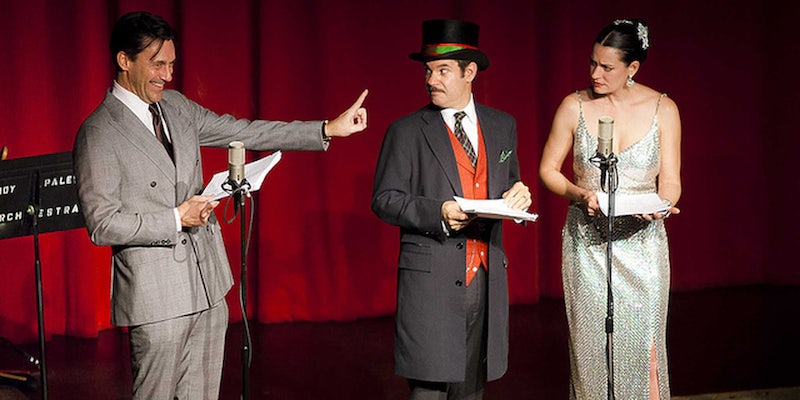 A fandom guide to the ‘Thrilling Adventure Hour’

It's the most star-studded, most hilarious hour in podcasting.

Back in 2005, Ben Acker and Ben Blacker wrote the first episodes of the Thrilling Adventure Hour, a variety show inspired by old-time radio serials. Filled with sci-fi and horror genre parodies, their regular live performances quickly turned into a cult hit in Los Angeles, attracting guest appearances from a long, star-studded list of geek-culture actors and comedians.

Tickets to the live shows now sell out months in advance, so it’s just as well that the Thrilling Adventure Hour has been available in podcast format for the past two years. And thanks to the huge number of people now being introduced to modern audio drama by the success of the world’s most popular podcast, Welcome to Night Vale, its fanbase is only going to get bigger.

But while Night Vale may seem like the obvious comparison, the Thrilling Adventure Hour actually has more in common with genre-savvy TV shows like Firefly and The Middleman. The Hour is usually made up of three twenty-minute segments inspired by vintage pulp fiction (think fast-talking Hollywood Noir detectives, classic horror stories, or 1940s superheroes), and is packed solid with funny one-liners, catchphrases, sly pop-culture references and parodies of well-known genre stalwarts like Batman and Flash Gordon.

Because the live performances are structured like an old-time variety broadcast, each “episode” includes two main story segments (usually paranormal mystery sitcom “Beyond Belief” and space Western “Sparks Nevada, Marshal on Mars”) with a third story sandwiched in between. There are also ads for the show’s nonexistent “sponsors,” Patriot Cigarettes and Workjuice Coffee, “the most caffeine-dense coffee legally available in the marketplace.” They used to be as fictional as Quentin Tarantino’s Big Kahuna Burger, but now you can actually buy your very own Thrilling Adventure coffee and (candy) cigarettes. 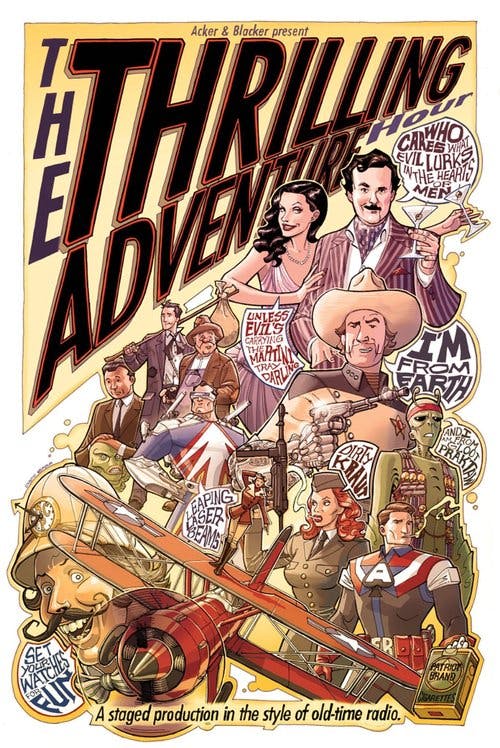 Most of us are unlikely to make it to the live shows, but luckily it’s very easy to pick up the podcast halfway through. Here’s our beginner’s guide to the most important parts of the show:

If Westerns are your thing, you’ll love Sparks Nevada. Each segment begins with a rendition of the catchy theme song, and follows the adventures of Space Marshal Sparks Nevada, his faithful Martian companion Croach the Tracker, and a revolving cast of robot bandits, cowboys, aliens, and sundry Old West cliches. The most famous space cowboy of them all, Firefly star Nathan Fillion, plays a recurring character named Cactoid Jim, and Dr. Horrible’s Singalong Blog fans will be happy to learn he plays a major role in the show’s double-length musical episode.

Sparks Nevada is probably the most fandom friendly segment on the Hour, because it has a serialized story arc rather than just relying on single-episode storylines. There’s a lot more backstory than with the other segments, which only keep vague continuity from week to week. The overall tone is like a soap opera written by an extremely talented 10-year-old boy, with plenty of dramatic (and ridiculous) twists and turns. 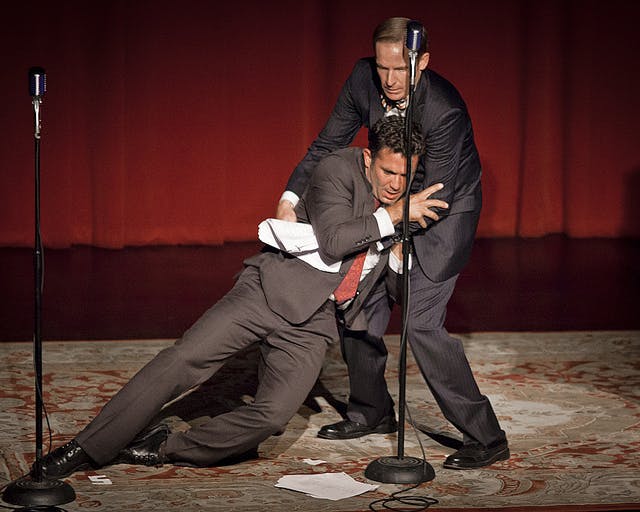 The manly Sparks Nevada has no problem with getting into a gunfight or using his robot fists, while the solemn and overly literal Croach is the Spock to his Kirk. Actually, we were expecting to find more fanfiction about these two—particularly considering the recent developments in Croach’s male pregnancy storyline.

This segment sees married couple Frank and Sadie Doyle come up against a whole host of supernatural creatures from the Great Beyond. Don’t mistake them for Ghostbusters or vampire slayers, though. Frank and Sadie may have the ability to contact the Other Side, but they’re far more interested in staying in their suite at the Plaza Hotel and drinking a seemingly infinite supply of martinis.

As the show’s narrator puts it, they’re “the toast of the upper crust” in New York City, which explains why they can afford to lie around drinking all day with occasional breaks to gatecrash a seance or deal with the Jazz Age equivalent of a Scooby-Doo villain. Each episode begins with the same exchange. “Who cares what evil lurks in the hearts of men?” exclaims Frank. “Unless Evil’s carrying the martini tray, darling!” Sadie reminds him, as they share the first toast of the evening. Clink!

If you’re looking for someone to ship, then the Doyles are an ideal choice. Frank and Sadie have the kind of eternally passionate relationship most of us can only dream of, although admittedly there is a third party involved in the marriage: booze. They also have some of the best historical voice-acting in the show, with Sadie speaking with a perfect cut-glass accent and calling everybody “darling.” Listen for period-specific cameos such as the ghost of Jay Gatsby, riffs on the noir detective genre, and themed episodes like as an evil Peter Pan story or “Rosemary’s Baby Shower.”

The other recurring segments all play with various elements of vintage adventure storytelling, and range from romance to sci-fi parody. Here are a few of the most popular: 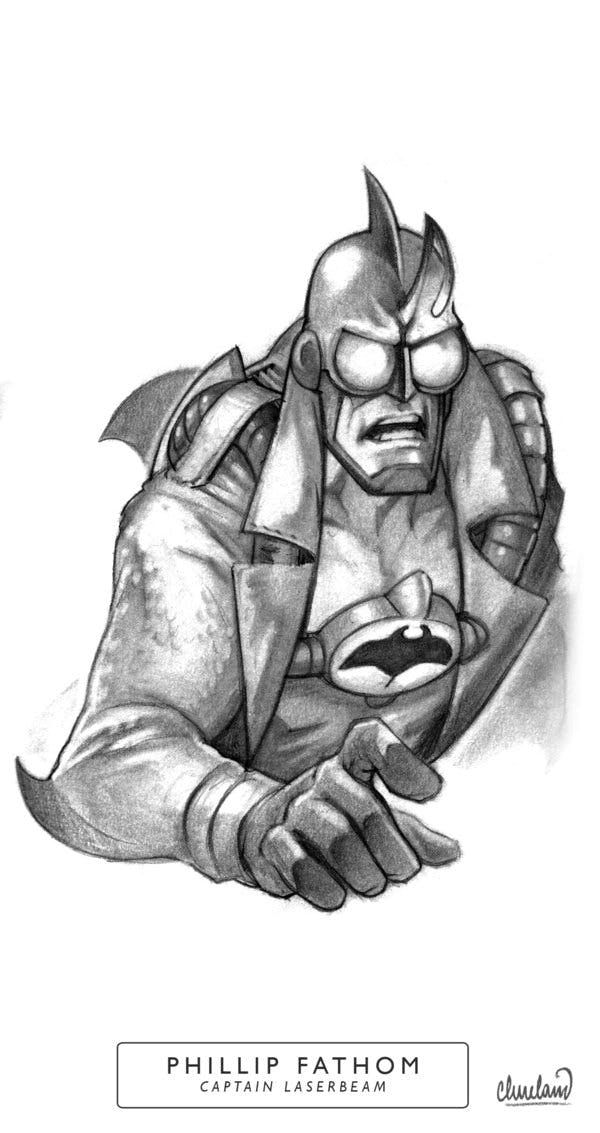 Plenty of TV shows and YouTube series have capitalised on their geek culture cred by casting actors from franchises like Buffy and Star Trek, but the Thrilling Adventure Hour goes several steps further. There have been so many appearances from the stars of shows like Community, Freaks & Geeks, Doctor Who and the Whedonverse that the Thrilling Adventure Hour’s Wikipedia list of Notable Guest Stars is threatening to spill over onto an extra page.

Aside from the obvious appeal of guest characters voiced by Allison Brie, Misha Collins or Joseph Gordon Levitt, our current topical recommendation would be the episode “Sparks Nevada: Into Darkness,” which features Agents of S.H.I.E.L.D.’s Clark Gregg as a gay space cop who helps Busy Phillips give birth to a mysterious child. (Seriously.)

Night Vale fans will be used to the idea that audio fiction has no need for visuals, but for obvious reasons the Thrilling Adventure Hour is different. While Sparks Nevada may not look exactly like the suit-wearing Marc Evan Jackson, and Mark Gagliardi doesn’t actually look like a Martian, we can be sure that Frank and Sadie Doyle are just as glamorous as their real-world counterparts, Paget Brewster and Paul F. Tompkins.

There are no hard-and-fast rules on whether actors should dress up for the live performances, but luckily, there’s a new way for fans to know what their favorite characters are meant to look like: the Thrilling Adventure Hour graphic novel.

The book was funded via Kickstarter last year, and will feature separate stories for all the main segments in the show. But thanks to the fact that they raised almost $140,000 over their original Kickstarter goal, there’s more on the way: a live concert video, and a scripted web series including behind-the-scenes footage. 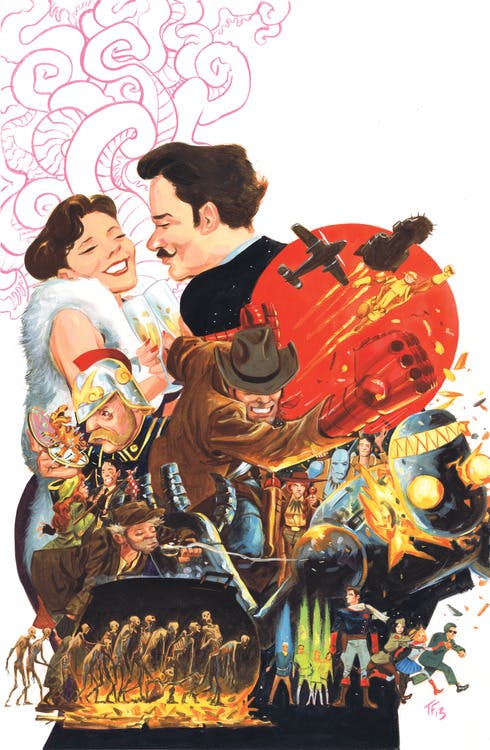 Until then, there are more than 140 episodes available online. The great thing about the Thrilling Adventure Hour is that thanks to the variety show format, there’s something for everyone. If you’re not interested in Westerns, that’s fine: you have paranormal romantic comedy in the shape of the constantly tipsy Doyles, vintage superhero fiction from Captain Laserbeam, steampunk time-travel, sci-fi drama, and even the occasional musical interlude from the Andy Paley Orchestra. Oh, and although you’ve missed this year’s chance for Halloween party costumes, this show provides a lot of inspiration for cosplayers, particularly since one set of characters require you to be constantly drinking cocktails.

The winning formula of this show is its sheer sense of fun. Although vanishingly few of us have ever listened to a Pre-War radio serial, the genre has filtered down through Star Trek and Spaghetti Westerns and the evolution of classic American superheroes like Superman and Captain America. The Thrilling Adventure segments are just familiar enough to appeal to modern geek audiences raised on a diet of Joss Whedon and Spielberg movies, but weird enough to stand out. Plus, the potentially lonely nature of audio media is tempered by a growing Tumblr fandom and the fact that in every episode, you can hear the live audience roaring with laughter along with you.

To be honest, we’re surprised that this show isn’t even bigger than it already is. What with the supporting cast of Comic Con celebrities like Nathan Fillion, and the fact that writing team Acker and Blacker have written for fandom favorite Supernatural, the Thrilling Adventure Hour is like fandom catnip.

Now, all we have to do is wait for the fanfiction to show up.