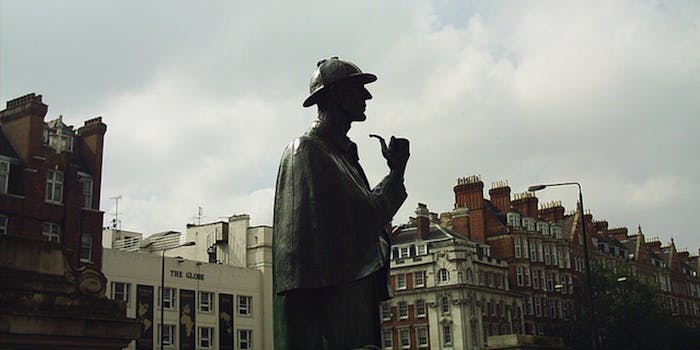 It’s official: No one owns Sherlock Holmes except the public

Sir Arthur Conan Doyle's estate can no longer attempt to profit from his legacy.

After years of uncertainty, it’s finally been decided: Sherlock Holmes is in the public domain.

People have been publishing Holmes novels (and making spinoff movies and TV shows like Sherlock and Elementary) for decades, so it may come as a surprise to learn that Arthur Conan Doyle’s estate are claiming that the Sherlock Holmes characters are still bound by copyright law in the U.S.

The case reached the public eye via a site called Free Sherlock, which details the campaign for Holmes and Watson to be brought fully into the public domain. Although Holmes is no longer bound by copyright law in Britain, an American editor named Leslie S. Klinger found himself in a difficult situation when the Conan Doyle Estate contacted him about a short story collection he intended to publish, In The Company of Sherlock Holmes.

Although Klinger and his co-editor Laurie R. King had paid a $5,000 fee when publishing a previous collection of Holmes stories, the Conan Doyle Estate suggested that they would have the new book shut down and removed from retailers if it was published without permission.

Klinger filed a civil complaint, and the resulting legal dispute has been followed by Sherlockians the world over, often discussed on the #FreeSherlock hashtag. Earlier this week, the trial’s judge ruled that U.S. writers may publish fiction about characters or situations connected with any of the Holmes stories published before 1923.

This means that the majority of the Holmes canon is now readily available for fanfic publishers and other transformative works, although some details from the final ten stories (such as Watson’s second wife, and Holmes’ retirement) are not yet in the public domain for U.S. writers.

“Sherlock Holmes belongs to the world. This ruling clearly establishes that. Whether it’s a reimagining in modern dress (like the BBC’s Sherlock or CBS-TV’s Elementary), vigorous interpretations like the Warner Bros. fine Sherlock Holmes films, or new stories by countless authors inspired by the characters, people want to celebrate Holmes and Watson. Now they can do so without fear of suppression by Conan Doyle’s heirs.”

In the world of fanfic, Sherlock Holmes is the oldest and greatest source of what we think of as modern fandom, a culture that primarily subsists on the discussion and exchange of fanfiction and other transformative works. When Conan Doyle was still alive, readers often sent him samples of their own Holmes fanfiction, many of which he personally acknowledged. This even includes a Holmes parody by Peter Pan author J.M. Barrie, The Adventure of the Two Collaborators, which was originally thought by many readers to be the work of Doyle himself.

Over the next 125 years, countless fan writers have been creating new stories about Holmes and Watson, and this latest ruling will only help to solidify the legality of those who want to publish those stories on a professional basis.