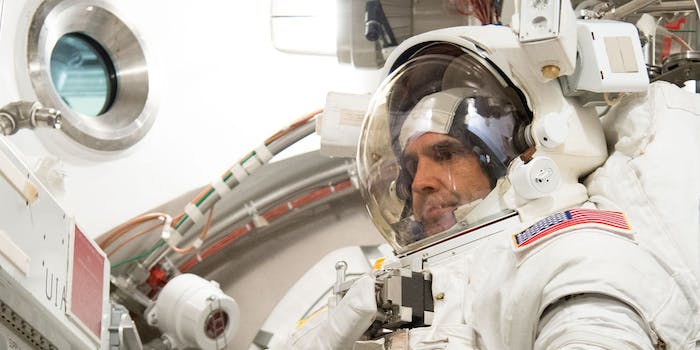 Don’t think enthusiasm for the space program has waned over the years. The buzz is all online.

Those of us who regret being stuck on Earth can count on astronauts on the International Space Station sharing their experiences over social media. From Canadian astronaut Chris Hadfield’s use of Twitter to current space-station astronaut Karen Nyberg’s amazing photos on Pinterest, what people are up to in orbit is always captivating.

NASA decided to take this connection to a new level over the last few months with the help of astronaut Rick Mastracchio, the flight engineer for the next space-station mission, Expedition 38. Mastracchio offered people a unique way to join him during his training and on his trip to the station through a trivia contest.

Since March, Mastracchio has been running the contest on his Twitter account by asking monthly questions about his mission and the training he’s been undergoing in preparation for it. People could find the answers in his daily tweets. Those that answered correctly were then asked to send their photos to NASA, so the pictures could be sent to the space station with Mastracchio. Once in space, he plans to photograph the 7 winners’ pictures with the Earth in the background and tweet them. He’ll call each person a “virtual crewmember” on the mission.

“We were thinking of ways people could get more involved in the mission and not just by offering info, so we decided to go with a Twitter contest and ask trivia,” Mastracchio told the Daily Dot from the Gagarin Cosmonaut Training Center in Star City, Russia. “The response has been great. It’s been a lot of fun for me! Folks are excited to have their picture flown into orbit.”

#ISSFE7 – Question 7 – To what temperature can the Space Station Freezer (MELFI) chill samples?

Don’t think enthusiasm for the space program has waned over the years. The buzz has spread to Twitter. A look at the hashtag #ISSFE7, which was used for the contest, shows there is still a lot of excitement around these missions. The hashtag has been used not just for the contest, but by people who want to chat about the upcoming mission.

Mastracchio, a veteran of three space shuttle flights, also has a Facebook page, but he thinks Twitter is the best social network for maximizing contact with people curious about what astronauts and NASA are doing.

“Twitter is a great way for NASA to give a behind-the-scenes look of what our training is like. [We do] so many interesting things on a daily basis that I enjoy sharing with Twitter followers,” he said.

Mastracchio said he isn’t sure he’ll be able to keep up with the rate of other astronauts who update their social media from the space station, but he plans to tweet at least once a day for now to share some of the exciting things he’ll be doing up there. His expedition will be taking part in hundreds of experiments across fields, including biology and physical science, during their 6 months on the space station. While there are no solid plans to continue the trivia contest when Mastracchio reaches space, he said they are thinking about it and other ways to keep people engaged on Twitter. He said all astronauts should use social media as a way to connect with people and get them excited about space exploration.

“Part of NASA’s responsibility is to educate the public, the American people, about what they’re doing and why they’re doing it,” he explained. “The people are paying taxes and providing money to do these things. It’s very important to inform the public in as many avenues as possible.”

Mastracchio will leave for the International Space Station aboard Soyuz 37 on November 6 with Koichi Wakata of the Japan Aerospace Exploration Agency and Mikhail Tyurin of the Russian Federal Space Agency.